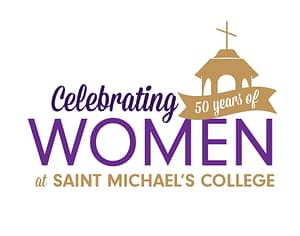 The late 60’s and early 70’s were a time of unprecedented demographic shifts on college and university campuses around the country and Saint Michael’s was no exception. In the fall of 1970, after President Bernard L. Boutin proposed admitting women, and with Trustee approval, 23 women enrolled as full-time students living together in what is today known as Linnehan Hall on the former North Campus.

The result was a paradigm shift in the makeup of the community and culture of Saint Michael’s College. From that first cohort of 23 women, the number jumped to 124 the following fall and 227 in the fall of 1972, an increase of nearly 900 percent in just two years. Today, women make up more than half of the student body and have found success and accolades in every corner of campus life.

Surprisingly, they were not the first female students at Saint Michael’s. The timeline below showcases the history of women at the College and the impact they continue to have today. We invite you to visit this page often as we begin our year-long celebration of the 50th Anniversary of coeducation at Saint Michael’s College. Scroll down to see upcoming events that mark this milestone as well as the 100th anniversary of women’s suffrage.

Author, activist, and lecturer Loung Ung ’93 gave a moving SMC Reads presentation on her third book, Lulu in the Sky, as part of the 50th Anniversary of Women at SMC program on May 19.

Saint Michael’s College is celebrating International Women’s Day and the contributions that outstanding women make to our community each and every day. Read the stories from women in our community and we hope their stories will inspire you as much as they have inspired us.

As part of the College’s yearlong 50th Anniversary of Women at Saint Michael’s celebration, Susan Rietano Davey ’83 will give a talk about the importance of women negotiating for what they want and need in the workplace. All female current students, faculty, and staff are invited to attend.

Check out the recording of our virtual roundtable event to hear from members of the first coed class as they talk about the triumphs and challenges they faced at a previously all-male institution. This event was the kick-off for the 50th Anniversary of Women at Saint Michael’s celebration.

History of Women’s Athletics at SMC

A timeline of female firsts at Saint Michael’s College

The following was written by SMC librarian and archivist Liz Scott.

Saint Michael’s College opens its doors.  Three Daughters of the Holy Ghost traveled from France and perform the domestic tasks necessary for housing and feeding people.  They cook, clean, and do laundry for both priests and students.

Nuns pose on the porch of Founders Hall.

A handful of Women Religious take a full schedule of college classes at Saint Michael’s. While they do not take courses alongside male students, their curriculum is similar and they are taught by some of the same professors.

Sister Mary Gonzaga receives an M.S. from Saint Michael’s. The subject of her thesis is “The Apollonian Problem.” It is the second M.S. granted by the college.

Elsa Kiel Sichel is the first female faculty member.  She teaches biology from 1942-1943, but, as was true with many women working in wartime, she was replaced by a man once they started returning from WWII placements.

Although Religious Women had been earning Master’s degrees since 1931, Eileen McGinley’s Master of Education is notable, as she is the first lay woman to earn a degree at Saint Michael’s.

“Ladies of Saint Michael’s” begins as a group for the wives of the students who came to campus with the GI Bill.  Many of the families lived on campus, and the club was a welcome outlet.  Wives of faculty and staff also participated, and the club was a very visible presence welcoming new students and their families at the beginning of the year and hosting periodic events for many years.

Nursing students at nearby Fanny Allen Hospital take science courses on campus.  This arrangement continues until 1968.

–Dr. Alice Thayer is the first woman hired to teach on campus after World War II. She teaches in the English Language program until 2001, when she retired as Professor Emerita.

–Maureen McNamara becomes the first female administrator when she is named Registrar.  After beginning as a secretary in 1947, McNamara received various promotions, serving as Assistant Registrar and later as Coordinator of Extension Services and Graduate Programs before becoming Registrar.

–Dr. Marie Henault becomes the first woman to chair an academic department –English. There is a senior class award named in her honor.

Saint Michael’s admitted women as full-time undergraduate students.  Although admissions staff promised 100 women, only 23 began in the fall of 1970. (Some records say 26 – with three living off campus).  They made up slightly more than 2% of the undergraduates.  Six women are listed among Faculty in the 1970-71 catalog.

-The first female undergraduates receive their bachelor’s degrees from Saint Michael’s.
-Title IX is a federal civil rights act that prohibits discrimination based on sex in education programs and activities.  While it is far –reaching, one of the most immediate effects at Saint Michael’s was that athletic offerings for women were vastly expanded.

–The Women in Society Symposium, organized by Dr. Buff Lindau and Dr. Carrie Kaplan, draws large crowds for a series of lectures, panels and other events by famous (and not yet famous) authors, thinkers, and artists on a broad range of topics related to women.  The New York Times publicizes it in a half-page article.

–Eileen O’Brien ’81 is the first female on the Student Association Executive Board.

Molly Dwyer ’81 is elected Student Association president.  All members of the Executive Committee were female.

After a successful campaign spearheaded by Molly Dwyer, The Michaelman changed its name to The Defender. The first issue was printed Sept. 12, 1980.

–Andrea Cremins ’81 is the first female editor of the 1981 Hilltop yearbook.

In January 1991, Dr. Susan Summerfield of the Fine Arts Department became the first Dean of the Faculty.  She was the only woman to hold that position until Dr. Tara Natarajan became Dean in 2019.

Nancy Fink ’77 becomes first female president of the Saint Michael’s College Alumni Association. She goes on to serve as a Trustee.

The Women’s Center opens on campus.

Award-winning author and political activist Loung Ung ’93 (right) is the first woman inducted into the College’s Academic Hall of Fame.

Jamila Headley ’07, originally from Barbados, is the College’s first female Rhodes Scholar recipient and goes on to earn her Ph.D. from Oxford University.

In September 2018, Dr. Lorraine Sterritt was inaugurated as the 17th president of Saint Michael’s College.

Although the 2020 numbers are not yet calculated, in the last academic year a little over 54% of the student body and 46% of faculty were female.