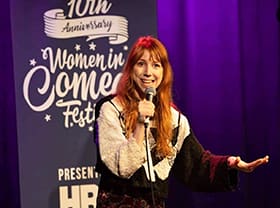 Tina Friml is seen working different comedy venues leading up to her most recent appearance at Montreal’s Just For Laughs festival, shown in the photo below at left. (photos courtesy of Tina Friml)

“Comedy became a cool thing, then it became a hobby, then it became my life,” said Tina Friml ’16, who took her first comedy class, won Vermont’s Funniest Comedian, performed in Montreal’s famous Just For Laughs (one of the most prestigious comedy festivals in the world), and got signed by a New York City manager all within three years of graduating from Saint Michael’s College.

While now confident and well on the path to success, Friml’s final days at St. Mike’s were marked by a fair amount of apprehension: “Graduating college, I was unsure of how to be a disabled adult as opposed to a disabled kid and then a disabled student where you’re constantly surrounded by your support system and people you know,” she said. Living with cerebral palsy—a condition that affects both her fine and gross motor skills as well as her speech—Friml reflects that the weight of leaving college and going out into “the real world” was heavy as she approached the end.

After nine months spent in limbo following graduation, Friml signed up for a class at the Vermont Comedy Club where she stumbled upon not only the rich and supportive community she feared she would be lacking, but also her greatest passion and talent: using her unique circumstances to make people laugh.

“The tension just broke like nothing else, and it was incredibly obvious what had been holding me up,” Friml said about the first joke she made on stage acknowledging her disability. She reflects that there was a “night and day difference” between the responses rendered from that joke and from her previous bit, which had nothing to do with herself or her disability and didn’t receive many laughs.

That joke soon led to what is now Friml’s introduction and very first joke of every performance: “Hi, I’m Tina and I’m disabled. But don’t worry, you’re going to be okay.” While this opener ceaselessly renders outbreaks of laughter among her audiences, Friml said that it wasn’t initially meant to be a joke, but was a concept that she had been grappling with long before she came on the comedy scene. “It was just something I wished I could say to people in real life,” she said, explaining that dealing with people’s stares, assumptions, misconceptions, and stereotypes is often a part of her daily life. “You don’t have to tiptoe around me, I’m not made of glass. You can just talk to me and it’s going to be fine!” she said vibrantly.

Friml owes the foreshadowing of this joke and of her comedy as a whole to a Saint Michael’s experience: a creative nonfiction writing workshop taken during her senior year. Looking for a way to externalize the thoughts that race through her mind as she interacts with the world around her, Friml wrote her entire memoir-style essay about living with CP. While she received a good grade on the project and good responses from her classmates, she knew there was something missing. “I remember coming out of the class and feeling dissatisfied. My piece was a tragedy, and I’m not a tragedy.”

Humor was, indeed, what was missing for Friml. Now, she stands up and speaks her mind to audiences of up to 800 and instead of receiving sympathy or pity, she receives laughs. “My jokes are not about me being disabled. They’re about people reacting to me being disabled,” she says. “It’s like putting up a mirror to the audience, and showing them what I see.”

Friml reflects that once she started getting gigs, “it just snowballed from there.” One of her biggest accomplishments was winning “Vermont’s Funniest Comedian” of 2018—a title that came with prizes, a sum of cash, and the opportunity to go to New York City and audition to be considered for Just For Laugh’s (JFL) “New Faces Unwrapped,” a showcase featuring multiple comics, each performing six minute bits.

“I ‘knew’ there was no chance that a Vermont comic was going to get something when so many Boston, New York, and LA comics were auditioning,” Friml said, explaining that her audition was composed of all New York comics and her, a small town Vermonter. After not hearing back from the JFL producers for nearly a month, she got called back for a second audition, which earned her a spot at JFL.

“I could not wrap my mind around the fact that I got in over hundreds of people,” Friml said. Yet knowing the producers were looking for “people who stood out,” she never lost hope: “There was always part of me that said, ‘I don’t know, Tina, you might have a shot.’”

The day the “best news” of her life came out to the general public—she wasn’t allowed to tell her friends or family until the official JFL release date—marked an emotional time for Friml: “All of a sudden, I just got bombarded by texts and emails and Facebook notifications. I had to step away from my phone, it was so overwhelming.”

“It was fun, in a very stressful way,” Friml said of her time at the festival. While she had attended JFL as an audience member with her parents for the past four years, going as a performer was an entirely new experience. With managers, agents, and bigwig industry members in attendance to scout out their next clients, Friml’s time off stage was spent networking and going to various meetings.

As for the performance part of the trip, Friml couldn’t be happier. A longtime “theater kid,” she felt right at home on the big stage of the 800 seat theater. Furthermore, she had a group of fellow Vermont comics sitting right in the front row, cheering her on. “I could hear the laughs I know, but then behind them was just an army of laughter they were leading,” she said.

All the networking and meetings paid off. Friml is now wrapped, signed by one of the judges who chose her for Vermont’s Funniest Comedian nearly a year ago, and about to move to New York City to continue pursuing her passion and changing the way the world sees her and her disability, one laugh at a time. “It’s really cool and overwhelming to realize it’s actually happening. It’s not just going to be a hobby that I daydream about making a profession,” she said.