Shown speaking in photo directly above is author Francisco Cantu. Below, Peter Vantine introduces the speaker, guests from Migrant Justice share, Cantu meets students and signs books after his talk and a question-answer session. (photos by Danielle Joubert ’20)

With aggressions rising along the border of the United States and Mexico, it is important to remain informed of our country’s immigration policies and affairs. For many students at Saint Michael’s College, a lecture given by Francisco Cantú, the author of The Line Becomes A River, provided insight into the workings of the border patrol system and the systemic damage that he says it has inflicted upon our society.

The night began with an opening from Professor Peter Valentine, director of the First-Year Seminar Program, who introduced the former border patrol officer and thanked him for traveling from Tucson, Arizona to deliver his perspective on the border crisis in the United States and Mexico.  The Line Becomes a River is this year’s Common Text for all First-Year Seminar students, and the McCarthy Arts Center Recital Hall where he gave his lecture was filled to overflow capacity Tuesday evening.

As the author began his lecture, he noted the importance of understanding modern-day media and how the portrayal of the border impacts our intellect on the issue. Cantú said that the current situation at the border “obscures the lives of those meant to live with the most immediate repercussions” and that it is an “unstable, unpredictable, precarious place.”

Cantú had worked as a field officer in the border patrol after he developed a desire to study the Mexican border while in college. Cantú graduated with a degree in International Relations and then proceeded to be trained in this field. After working in the field, he worked in a border patrol office monitoring camera footage. He later realized that this no longer piqued his interest, and he returned to the field shortly after.

At Saint Michael’s Tuesday night, Cantú continued his lecture by informing listeners about the institutionalized discrimination that he feels exists at the border and how migrants are punished for seeking asylum. He said that migrants are viewed by the government as having little to no political value, “rendering them as less than fully formed humans.” However, the author desired to serve as a compassionate individual, deviating from the dominant culture of cold-heartedness at the border.

Facilities where migrants are detained are almost entirely shut off from public view. In fact, no other country imprisons non-criminals to the extent of the United States. In the fiscal year 2016, more than 60,000 people were held in for-profit facilities. The “commodification of bodies in a militarized border and the trafficking of human life” is concentrated within the walls of the detention center, he said, which serves as a way of deterrence and is a foundational policy of all immigration enforcement.

The author ended his lecture with many powerful statements about the channeling of outrage surrounding this issue. He stated that these feelings connect us to another dimension of thinking and experiencing the world around us. By sealing the distance that separates us and our borders, we may begin to experience a sense of responsibility to push back against violence and anonymity, he said.

Vantine said he felt the Cantú event was “a resounding success,” and the First Year Seminar director was thrilled that the Recital Hall was filled to standing-room only. Vantine characterized the author’s 40-minute talk as “a combination of new examples and observations along with references to various portions of his memoir,” with Cantu at times reading short bits from the memoir and somewhat longer passages from the Author’s Note to the paperback edition, though he wove them into his talk seamlessly.

The evening’s program also included a brief informational presentation by two representatives from Migrant Justice, a Burlington-area activist group. One was a migrant dairy farm worker who spoke in Spanish for about 10 minutes while the other translated for him into English. They spoke about the organization,  the challenges faced by migrant workers in Vermont and their Milk With Dignity agreement with Ben & Jerry’s that has been in place for several years along with and a campaign launched in October 2019 to have Hannaford’s sign on to the same agreement.

After the lecture came a question and answer session of about 30 minutes with multiple questions for Cantu and the final two questions for the migrant worker. “That part was really interesting and he gave great answers,” Vantine said. “The student questions were good and prompted interesting answers. Cantú remained after the talk to sign books for over an hour and made a point of speaking for a minute or two (and in some cases more) to every student who asked to have their book signed. Those students, some of whom waited for quite a while, seemed quite pleased to be able to have even that brief personal interaction wit The value of human life is an important aspect surrounding the ethics of the border crisis, Cantú emphasized throughout the evening, and the mere feeling of empathy is not enough because compassion is an unstable emotion. If it is not translated into action, it withers, he said, suggesting that our feelings and tears are useless unless they compel us to work towards change. 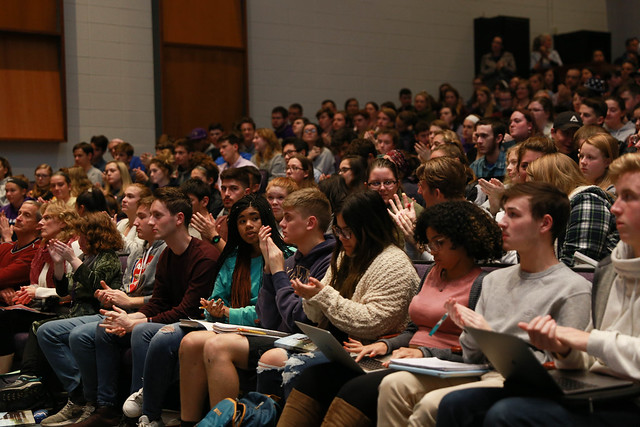