Federal agreement protects 163 acres from agricultural use, development in perpetuity; a major aim is reducing phosphorous 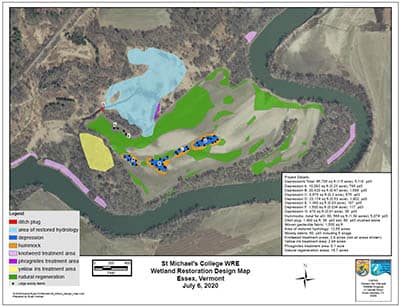 The maps above and below provided by Declan McCabe show the College Natural Area with information about proposed work, easements, and existing trails.

Saint Michael’s College has become the first Vermont higher education institution to work with a federal wetlands easement program in the long-term preservation of natural habitat, reducing harmful phosphorous runoff into Lake Champlain and supporting educational and research programs in the College’s increasingly popular and active Natural Area across Route 15 from the main campus.

In a formal agreement signed in late December, the College partners with the U.S. Department of Agriculture’s Natural Resources Conservation Service (NRCS) wetlands easement program and its Vermont agents to protect 163 acres of the Natural Area’s roughly 350 total acres from agricultural use or development, in perpetuity. The word easement refers to a legal right to use somebody’s land for a specific purpose.

One of the federal program’s key motivators, both in Vermont and nationally, is reducing phosphorous in waterways. The Winooski River runs along the edge of the Natural Area land, which for more than 100 years has been farmed, either by the College or by local farmers leasing the land to raise crops. Phosphorous-rich fertilizer from the farm had been at the heart of present federal concerns about the area, as would be potential runoff from possible future developments if not protected from that.

Rob Robinson, the College’s vice president for finance, said he signed the paperwork on behalf of the College before Christmas, and the NRCS attorney completed the process in the last days of December. Some significant incentive funding from the USDA to the College, to allow the desirable preservation by transferring development rights, is part of the agreement.

In 2016-2017, Saint Michael’s biology Professor Declan McCabe was the primary initiator of both natural preservation in The Natural Area and its far greater use by the College and community. McCabe says he has been working closely with James Eikenberry of NRCS in Colchester on the easement and related projects. “One issue with the site is that it’s a flood plain and when there are floods, phosphorous heads to Lake Champlain,” said McCabe, who regularly had been using the Natural Area for classes and personal exercise before many others discovered it for all those purposes.

The NRCS was only interested in the acres that were farmed since the remaining acreage could not be farmed – hills, wetlands and swamps, McCabe said. “My thought process five or six years ago was that it would be nice to have a Natural Area, and protect the river from erosion — so I started to talk to people who knew about it.” Eikenberry told McCabe he thought the acres in question would qualify for the easement program and explained the potential benefits, and it sounded promising to the professor for many reasons.

The area is “a huge educational resource for us,” said McCabe, noting that multiple classes and departments are using it now and have for the past few years: biology, chemistry, environmental studies and science, English, fine arts, and even computer science as faculty get ever more creative. “We’ve had two art exhibits over there, we have four miles of hiking trails, there’s a lot of cross country skiing, and the Vermont Youth Conservation Corps did work there building steps along a steeper trail,” he said.

Also, Cub Scout groups installed bird boxes for wood ducks as a project, and McCabe has installed boxes for kestrels, owls, and smaller birds too. Other faculty recently have made various proposals relating to the Area that could bring additional funding. Environmental Studies Professor Trevien Stanger’s major contribution is planting trees, McCabe said.

The property happens to be partly in Colchester and partly in Essex, and each town has a “phosphorous budget” with incentives from the federal and state governments to help reduce harmful runoffs, so that could be a future source of funding for projects in the Area too, McCabe said.

Of the increasing number of community members coming to the Natural Area with its many improvements, few seem more excited to spend time there than bird enthusiasts. “They’ve declared it a birding hot spot,” said McCabe. He says birders have noted up to 165 species in the Area, including two eagle species. Also, McCabe has set up trail cameras around the paths and has seen a great-horned owl (and, beyond non-avian sightings, such creatures as bobcats, coyotes, fishers, and foxes).

Part of the upcoming work in the Area will be plugging a culvert in order to retain water on part of the site that was artificially drained for agriculture, eventually restoring these wetlands to something closer to what the original Abenaki residents would have known, he said, and holes also will be dug strategically to promote wetlands. The designer for much of the work is Ryan Crehan for U.S. Fish & Wildlife office in Vermont. In the past year, NRCS contracted with the Spatial Analysis Lab at the University of Vermont to fly drones to accurately map the site, leading to high-resolution maps.

The reason for the drone work and other close surveillance at this point is that in 10 or 15 years, “we can look and see what has changed, how we got to a point, or area where we need to plant more trees,” said McCabe.  The tree regeneration plan already has been mapped with the help of Crehan. Professor Stanger in recent years with the help of students already has planted willows, box elders, dogwoods, and sycamores among other species. A local organization called Branch Out Burlington had a role as well. “They were interested in donating trees and we were interested in planting them,” said McCabe. He said part of the plan stems from a concept called “Assisted Migration” which anticipates climate change and what trees might thrive 50 years or so from today, but still be able to survive relative cold now.

Saint Michael’s students in recent years have used the natural area for classes and helped with such projects as placing trail cameras for wildlife observation, as is being done here by Lilia Deangelis, Julia Bowen and Kyle Masters.

McCabe said that farmers and conservationists have different philosophies on the best way to utilize land, and that local farmers might not agree with the easement — but the priority of McCabe and others at the College is conservation and enough land already is available for meaningful and well-established College Farm programs. “It’s not that either philosophy is wrong, but you have to decide which is right for you as a landowner,” he said.

The biology professor had a glimpse of such a conservation easement and the results of it when he attended a nature writing workshop at Kenyon College in Ohio and toured their land enrolled in a similar easement. The federal agency has specific interests in what land they preserve.  “We even have wetlands that the NRCS are however not interested in since they already are protected by other federal laws,” said McCabe.

Even campus historians – Susan Ouellette of the history faculty and Fr. Joseph McLaughlin of the resident Edmundite religious community, for example – have done research to learn more about the area and its previous usages and ownership, McCabe said. Fr. McLaughlin’s research and knowledge of site history was instrumental in clearing some of the legal hurdles necessary to bring the easement to fruition. He has heard stories of how the area had a rudimentary ski jump for a time that many alumni remember. The ski jump bottomed out into the area known as the “P-Day field” where celebrations were held in days gone by.

With the planned work to restore some of the wetland area’s original natural character going forward with the easement in place, “we’re taking the site back 200 years essentially,” said McCabe.

Campus springs to life with multiple May tree-planting events

For biology students, trail cameras give peek at life around logs