Sean Hilton '18 perseveres through pandemic after graduate school, is excited by new position; Taylor Newton '08 an established professional in Vermont

Richard Kujawa of the Saint Michael’s geography faculty recently heard from his former student Sean Hilton ’18, who has been appointed as Senior Transportation Planner at Regional Planning Commission in Massachusetts. 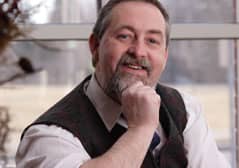 “He’s just a few days in and they’ve already got him cracking on project work,” Kujawa said. “I believe Saint Michael’s was a good place for Sean in terms of intellectual and personal growth and prepared him well for graduate school.” Hilton, who majored in sociology at Saint Michael’s, also had a minor in Human Geography that Kujawa helped guide him through.

Hilton completed a well-regarded graduate school program at the University of Iowa, where Kujawa also earned his advanced degree. Kujawa said another former student of his with a St. Mike’s Human Geography minor from a decade earlier, Taylor Newton ’08, also completed graduate school at Iowa, returning to Vermont for a job at Chittenden Regional Planning Commission in Winooski where he now works.

Here is his bio from his employer’s website: “Taylor has over 8 years of experience working with municipalities and regional planning commissions in Vermont on land use, environmental, and energy planning issues. He joined CCRPC in 2020. Taylor’s work is primarily focused on providing municipalities with planning, regulatory, and project management assistance.

“Prior to joining CCRPC, Taylor worked for Northwest Regional Planning Commission in St. Albans, Vermont and for the Town of Milton, Vermont. Taylor holds a B.A. in History from St. Michael’s College and a M.A. in Urban and Regional Planning from the University of Iowa. Taylor grew up locally in Colchester, Vermont and enjoys hiking, gardening, and cooking in his spare time. He lives with his wife and daughter in Burlington’s New North End.”

For Kujawa, Sean Hilton’s recent achievement finding work is more impressive given the challenges of the pandemic. “The job market is tough right now,” he said, “and yet Sean just scored a full time good job, and I thought that news should be shared!” said the professor.

Hilton described transitioning into his new work and how Saint Michael’s prepared him well for that:

This is the logo for Sean Hilton’s new employer.

“I am just getting started with new projects in my new job, so I am not 100 percent sure what the future holds, but based on my job description, I will be assisting with a lot of highway and infrastructure planning. This will involve a lot of public outreach, land use assessments, accessibility evaluations, bicycle and pedestrian path planning, etc. …. The other portion of my work will involve transit planning by collecting such things as on-board passenger data, analyzing fare equity, and developing surveys for transit users.

“In terms of St. Mike’s preparation, I would credit much of my ability to move through graduate school successfully, and eventually to land a job, to my experience with human geography and the Sociology/Anthropology Department. In human geography, I learned methods of spatial analysis as Richard mentioned in his Maps and Mashups course, as well as the other GIS course that was offered. It also changed the way that I looked at the connections all around me. I would not have thought much about roadway construction or land uses that inform how we move around if not for the chance to take human geography courses. This really informed my decision to pursue my MS in Urban Planning. Richard also set me up with Taylor Newton.

“In sociology, I had a chance to work with Vince Bolduc (who I believe has since retired) in our research methods course to evaluate public opinion on South Burlington’s comprehensive plan which also introduced me to the director of planning and zoning there. Through this experience I was able to obtain an internship my junior year which even further solidified my plans to pursue planning as a career. It also seems my first project will be involving survey design and distribution, so I am especially thankful for this experience with St. Mikes. Also, the department’s flexibility allowed me to take an independent study which I designed with [former Saint Michael’s Professor] Robert Brenneman addressing urban sociology. We did not know at the time but many of the documents and books I read for this would be many of the foundational texts in graduate school. It was definitely an advantage in getting through my first year.

“I was lucky enough to have these professors write me letters of recommendation when applying to graduate school as well. This was critical in securing funding for that time and I was able to get through graduate school only paying fees (Assistantships covered tuition and half of fees all while providing a stipend). I did not expect the schools in the Midwest to have such great funding packages, but that, combined with the low cost of living it was the right decision. My education from St. Mike’s made graduate school a fairly easy process and I credit my time and experiences at St. Mike’s for much of my ability to perform in graduate school and now on the job.

“Throughout all of this time, I returned to Massachusetts to work summers with the Department of Conservation and Recreation mostly doing grunt work at one state reservation (distributing park tickets, checking people into the campgrounds, park cleanup, etc.) until summer 2019 when I worked with the Cape Cod Commission (Neighboring RPC to where I am now) as a traffic technician, which helped me familiarize myself with transportation practices in the area.

“Needless to say, the pandemic put a damper on my plans after graduating with an MS in May 2020. Before this point, I was not sure where I would land with my new degree. With the end of my funding as a teaching assistant, I had to move back home and searched for a job for several months. My former professors (St Mike’s and Iowa alike) were great sources of support during this time, sending job postings they came across and just checking in. It was a long road and complicated to network during the pandemic, but I am excited to get started.”