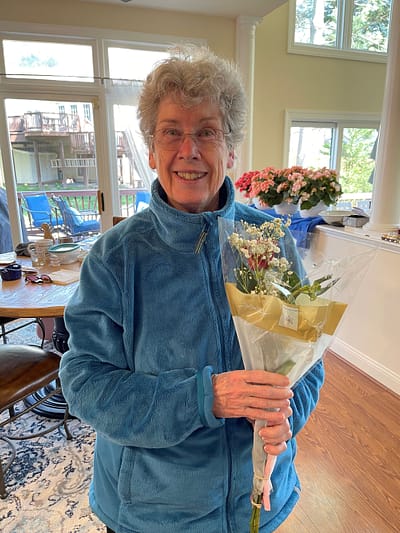 Sifting through old belongings and reliving moments from years before draws forth a special kind of nostalgia. However, what happens when you come across your Saint Michael’s College student ID from 1980 with a note to return it following commencement? Well, if you’re Williston, VT, resident and Saint Michael’s alumna Winnie McCormick ’80, you return it… 42 years later.

McCormick graduated from Mount Holyoke College in 1964 and received her master’s in special education from the University of Vermont. She was a special education teacher at Twinfield Union School, and though she had her master’s, “all the professors [from those studies] were behaviorists,” rather than teaching directly to the addressing of language and learning disabilities as her job demanded. So McCormick sought to further her experience in her field by pursuing a Certificate of Advanced Standing at Saint Michael’s College for language and learning disabilities.

“The program at Saint Michael’s was just great,” said McCormick, now in her 80s. She had nothing but praise for the Saint Michael’s program she was involved in as well as the professors, specifically former professor Mahesh Sharma who is now the president and founder of Mathematics for All in Framingham, MA. “We took a test to see how we learned, and it was very inspiring and did the trick… I’m a visual learner and [Professor Sharma] told me I was taught the wrong way for my learning style,” she said.

McCormick’s student ID was tucked away in a box for years until she came across it recently. She lived in Barre for a little over 24 years before moving to Williston to be closer to her children. “I was pulling out boxes and trying to reorganize when I found it,” she said, “I read everything, and it said right on [the ID] to return it, and I said, ‘whoops.’”

Dean of Students Dawn Ellinwood received a note in early July from McCormick containing her old student ID. Ellinwood was pleasantly surprised to receive the ID. “How lovely that Winnie thought to send the ID in after all these years,” she said. The difference in the student IDs from the 1980s to today is surprising. The 1980 ID contained the student’s birth date as well as their social security number. Students today are assigned an ID number and instead of a birth date, the ID displays one’s class year.

“I found this gesture to be very endearing and not surprising coming from a Saint Michael’s alumna,” said Ellinwood.