The following interesting historical account about a Saint Michael’s College building (and photos) first appeared recently as a post on the Facebook page of the Winooski Historical Society that the author, Joseph Perron, administrates: 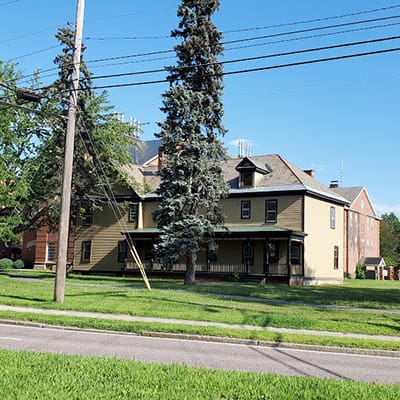 Founders Annex as it appears today on the Saint Michael’s campus.

While it has been a little over a year since Founders Hall at Saint Michael’s College was disassembled and demolished, one vestige of the original college edifice remains. To the west of where Founders Hall formerly stood on College Parkway/Route 15 is a wood frame structure once attached by a corridor to the main hall known as “Founders Annex.”

The Annex when Founder’s Hall still stood next store decades ago.

This building was constructed around 1910, and originally contained the kitchens and housing above for college staff. In 1933 an order of consecrated religious women known as “Les Soeurs Ste-Marthe” arrived at Saint Michael’s College to provide domestic services such as the cooking and laundry duties for the Fathers and Brothers of St. Edmund who ran the college.

The order was founded in 1883 by a young French Canadian woman named Eleanore Charron, and based in St-Hyacinthe, Quebec. While some religious orders have a mission of heath care or education, the main function of the Sisters of St. Martha (as they were commonly known in the U.S.) besides lives of voluntary poverty and meditative prayer, was to provide housekeeping services to larger religious communities. In the mid 1950’s there were approximately 200 Sisters of St. Martha in North America, and 12 at Saint Michael’s College serving 30 Edmundites. They were described in a Free Press article stating “for the most part are French, but can converse slightly in English.” The order derived its patron saint name from the biblical Martha who prepares food while Mary listens to the teachings of Christ.

At Saint Michael’s College, the Sisters of St. Martha cooked meals, laundered, ironed and mended sheets, cassocks and altar cloths, and in addition to a host of other responsibilities, some were even pastry chefs who baked elegant cakes for special events.

The Sisters of Martha serving at Saint Michael’s College in its earlier history.

Perhaps of interest to Winooski folks, John “Pro” Herbert while a student at Saint Michael’s in 1937 is noted as having donated 50 cubic centimeters of blood for a transfusion to save the life of critically ill Sister Marie de LaSalette. Rita Martel recalls as a young girl going up to the college to assist her cousin who was a Sister of St. Martha to peel massive quantities of potatoes for dinner. Like many religious orders, the numbers of the Sisters of St. Martha appear to decline by the 1970’s when greater employment opportunities became available for women.

Today, Founders Annex remains vacant, and I am unsure of what future plans are for the structure.

(editor’s note: Rob Robinson, the College’s vice president of finance and administration, said of the Annex and its future: “We have ideas, but the cost to renovate into something functional is high.” Hence, the building will remain vacant for the near future at least — though continuing (with an exterior facelift so far) as a handsome and visible reminder of the College’s history.)