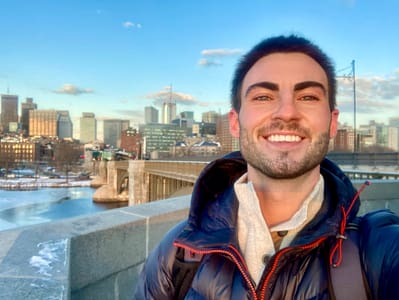 This coming February 2023, Tucker Raymond ‘21 will embark on a two-year stint with the Peace Corps after recently accepting a placement in the Dominican Republic to teach literacy in primary school.

During his time at Saint Michael’s College, Raymond studied biology and Spanish, while also participating as a leader in multiple groups on campus including MOVE, CORE, and Orientation. Through these experiences he witnessed the immediate impact that volunteering has within a community, in addition to the value of strong leadership and communication skills, all capabilities which will prove essential during his work for the Peace Corps, he said.

Beyond his interpersonal skills, Raymond also intends to rely heavily on his experiences in the Spanish Department at Saint Michael’s. “I have to thank my Spanish education from SMC for preparing me for this adventure,” he said. “Not only in my own communication competency, but also for the tools that I learned while learning Spanish.”

These “tools” refer to the range of mediums (such as literature, films, and music) frequently utilized in upper-level Spanish classrooms at Saint Michael’s. Through this variation, students can become better-rounded language-learners while simultaneously finding enjoyment in the subject matter.

“Truthfully, I am not 100 percent sure yet what my position will be doing day to day,” Raymond said. “However I am hoping to use tools that make learning fun like music, poems, books, and TV shows. I’ll use whatever resources I can to make it fun to learn.”

While his students will certainly learn a great deal, Raymond is also excited to do some learning of his own. “I am going to learn about this world, myself, the members of my community, the culture of the D.R., the Dominican way of speaking Spanish, and so much more,” he said.

In Spanish, as is true in any language, dialectical variations occur depending on social and geographical influences. As Raymond alluded to, the dialects of the Dominican Republic can be particularly difficult to understand because they tend to drop letters (most commonly D’s and S’s) while speaking, causing the words to become shorter and their speech to seem faster. For example, the Spanish word “cansado” (kahn-sah-doh) becomes “kahn-sah-oh” (phonetically). Or “esta” (es-tah) becomes “eh-tah.”

Tucker Raymond ’21 on an earlier adventure.

Adding another layer of complexity to comprehension, each country in the Spanish-speaking world has its own unique collection of slang and colloquialisms, as does the Dominican Republic. For example, in the classroom, a Spanish-language learner might be taught that “genial” means “cool” (in the sense of style or behavior, not temperature) but in the Dominican Republic it is “nítido,” in Spain it is “guay,” in Colombia it is “bacano,” in Mexico it is “chido,” and so on.

Given his dedication to learning language, Raymond said that his future work teaching literacy for the Peace Corps really speaks to him. “I’ve always said and thought that if we all could better communicate with one another, the world would be a better place,” he said.

In addition to continuing to strengthen the language skills of both himself and others, Raymond also looks forward to becoming immersed in the culture of the Caribbean. “The people of the Caribbean are like no other, they’re full of culture, love, passion, art, music, creativity, and of course, amazing food,” he said. “And the ability to go and interact, live, and hopefully mutually learn from the people of the D.R. really excites me.”

For any students considering the Peace Corps after graduation, Raymond strongly recommends that they take advantage of the many resources that Saint Michael’s has to offer, such as the Peace Corps Prep Program, MOVE, and Study Abroad.

“The entire SMC community really prepared me for this,” Raymond said. “Professors, the people of MOVE and Orientation, all my friends, everyone I interacted with, and Keri Leach, one of the most giving and caring people I know. My four years at Saint Mike’s prepared me for this.”