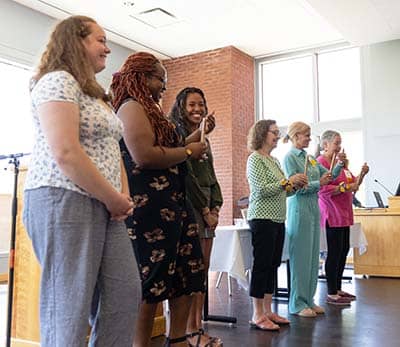 “The torch has passed” for women leaders at Saint Michel’s from the 1972 honored graduates group at right to today’s Student Association leaders at left. From left are: Felicia Fil ’23, KC Onuoha ’23 and Bridgette Hernandez ’24; then, in green, Carol Dixon, Kathleen Lacey and Louise Stafford, all ’72 graduates. (event photos by Patrick Bohan; file photos from College archives)

It was a warm and sunny welcome back to campus for alumni gathering to celebrate Reunion Weekend 2022, which featured special recognition for the class years ending in two and seven.

Class of 1972 members celebrated their 50th year of being Saint Michael’s alumni and became the newest “Golden Knights” – an honorary title that for the first time in College history can be applied now to women: In 1970 Saint Michael’s College opened its doors to women and 50 years ago in 1972, graduated its first four women. To honor this enormous milestone, President Lorraine Sterritt, the College’s first-ever female president, hosted a special celebration naming the 1972 female graduates as Alumnae of the Year.

Given such an occasion, an additional sense of pride filled the air, even beyond the standard spirited Reunion Weekend celebrations that took place all around campus and greater Burlington for individual class events June 3-5.

As people began trickling in for the 2 p.m. Saturday celebration of those pioneering women at the College, Carey Kaplan, retired professor emerita of English, approached President Sterritt for the first time since she was appointed president of the College.

“I’ve been wanting to meet you for a long time. You’re like my goddess… When I [taught] here, a female president was not even a whisper of a possibility,” Kaplan said. While something that modern Saint Michael’s community members often take for granted now, but it was clear how important female leadership meant to the female alumnae in attendance at the celebration.

Director for Alumni and Family Engagement Angie Armour ’99 welcomed the attendees to the celebration. “I’ve been looking forward to this day for a very long time,” she said. “We’re going to toast to the last 50 years and the next 50 years of women at Saint Michael’s College.”

President Sterritt made opening remarks, and the room erupted in applause at every mention of women at Saint Michael’s College. The pride that Sterritt had for the first four female graduates was palpable. “Saint Michael’s College would not be the college it is today… had those female students not come through our doors.” Some in the audience said it was humbling to hear Sterritt also attribute her own position at Saint Michael’s to the four “brave souls” that breached the entirely male student and staff body in 1972. “I’m especially grateful to you personally… as my job would not be possible without you.”

Louise Stafford ’72 greets former Dean of Students from her time on campus (and Saint Michael’s Fire and Rescue Founder) Don “Pappy” Sutton, as other ’72 women await their turns.

Sterritt spoke about how there were 26 female students the first year the College opened its doors to women, and they all lived together in building 800 on North Campus, which is no longer a residential space. These women often found themselves alone in classes full of men, and Sterritt praised them, saying that the accomplishment of being the first female president of the College pales in comparison to the accomplishment of being the first graduating female students.

Kaplan spoke after Sterritt, deeming it “an honor and a privilege to talk to [attendees] today.” She praised Saint Michael’s for its values despite those values having to develop as time went on. “I came to Saint Michael’s College in 1973,” she said, “And after about 10 minutes at Saint Michael’s, I was a serious feminist.” The entire room applauded. The College hired Kaplan, an assistant professor at the College when there were 60 women in a student body of 1,500. The professors were all male to Kaplan’s recollection, and many of them were priests. Many of the male professors were not happy to have a young woman as a colleague, Kaplan said, and many of the women on campus experienced sexual harassment or discrimination from male students and professors alike.

Carey Kaplan as an English professor in the 1970s.

“There were no women lavatories in the [academic] buildings,” Kaplan recalled, “and when women entered the dining hall, the male students would hold up paper rating them on a scale of one to ten.” Disgust arose from the crowd at this revelation.

To the College’s credit, it did not back down in its strive to integrate women into Saint Michael’s culture, despite these early difficult experiences.

Kaplan shared that she and Buff Lindau, former communications cirector at the College, organized the Women in Society Symposium in 1979, which drew a large crowd. The topics at the lectures, panels, discussions and more all centered on women, and the event was so popular that it earned a half-page article in The New York Times. Kaplan shared that she had a huge part in promoting and starting the Women & Gender Studies program at Saint Michael’s.

In her final remarks, Kaplan praised Saint Michael’s College for its progress, noting “more women students than men, and an amazingly confident woman president,” and she voiced her high confidence that Saint Michael’s will continue to face societal challenges head-on and remain a welcoming place for everyone.

After Kaplan spoke, Sydney Rybicki ’18 invited the three of the four 1972 first female graduates in attendance to share their perspectives about their time at Saint Michael’s. Carol Dixon, Kathleen Lacey, and Louise Stafford drew extended applause and Rybicki moderated a conversation among them. Here were some of the questions and the answers from the 1972 women class members:

What made you come to Saint Michael’s?

“Guys,” Lacey answered humorously, before saying that the “amazing faculty” and the opportunity to study the humanities were both huge influences on her choice to attend Saint Michael’s.

Dixon shared that they were actively recruited by the College after it decided to enroll women. The College promised her and the others that they would be among  100 women, but when she showed up, she discovered “a total of 23 of us,” Dixon said — not including the three women who lived off campus.

What is the biggest difference between your time at Saint Michael’s and today?

“When I think about where the College is today, I am so very proud of us taking on that challenge,” Dixon said. “Integrating worked.”

Stafford also brought up how many opportunities and services the College provides for not only women, but all students on campus. “We didn’t have that back then,” she said.

What advice do you have for the next generation of female Purple Knights?

You have to be flexible, Stafford said. “Address the challenges that we face. We are globalized… that’s your future. Embrace it,” Lacey said.

Dixon concluded, “Be confident in who you are and never ever be afraid to accept a new challenge.”

Theme of the day.