Although the majority of research at Saint Michael’s College is in the natural and social sciences, this summer Faith Morgan ‘23 and Rosemary Marr ‘23 will work alongside Professor Greg Delanty in the English Department to both study and write poetry. 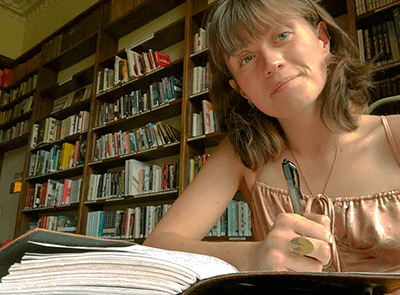 Marr, an English major with a philosophy and creative writing double minor from Bedford, NH, and Morgan, a business administration major with a creative writing and literature double minor from Litchfield, CT, first began working together after taking the same poetry workshop with Professor Delanty. Brought together by their love of poetry, the pair began sending their work to each other for help and feedback, ultimately inspiring their research this summer.

“As a writer, it’s always really nice to have somebody else look at your work, because sometimes you’ll be looking at a piece and not be able to figure out what’s wrong with it even though you feel like something is off. But having a fresh set of eyes, especially someone who also writes poetry, usually helps,” Morgan said.

After deciding that they both wanted to pursue research this summer, Marr and Morgan ran through countless potential research topics before ultimately deciding on poetry to continue the collaboration they had already begun outside of the classroom.

Despite their frequent collaboration, Marr and Morgan write in different styles.

Marr’s writing has heavy influences from modernism, a style that encompasses works from the 1800s through approximately the 1940s. Additionally, Marr said, she is influenced by postmodernism, the style of her mentor, which “hinges on fragmentation and free play within structure, as structure can never truly be rejected, emphasizing the individual and subverting absolute meaning.”

Morgan, however, writes in a contemporary 21st Century style in which a decreased emphasis is placed on structure (meter, rhyme, and so on), allowing her to focus more on storytelling in her writing.

Different from the other research projects on campus this summer, Marr and Morgan’s work will not have a hypothesis nor an overarching research question that they are probing. Instead, their work will encompass two major components: research and writing.

As of now, Marr and Morgan are in the process of researching a variety of poems. They meet approximately once per week with Professor Delanty to review various readings in an anthology of modern poetry. “Essentially, Greg re-reads poems from the book for us, and then walks us through an analysis of the different poetry. So this past week we’ve been working with Walt Whitman and Emily Dickinson, then at the end of this week, we’ll start with some new poets,” Morgan said.

After their preliminary research is complete, Marr and Morgan will begin writing poetry of their own with hopes to eventually be published in a book together. Since their poems differ stylistically, they plan to each write a series of poems on the same topics, allowing increased emphasis on their respective contrasting literary styles.

“Our main goal is to take one topic, say childhood events, and both write a poem about that topic, and then place the poems next to each other in a drafted book. We’re hoping that our readers are able to read those two different poems and see that although we’re talking about the same idea, through this similarity, they can also really differentiate between the modern and the contemporary styles,” Morgan said.

Marr and Morgan also hope that their poetry book can fill a demand for college-age literature. “We think that there’s a low supply of college writing or college-age poetry books both in Vermont and also in general. So we really wanted to supply something that’s very raw, we wanted to supply some kind of book that’s about our experiences, going through these moments in our life up to this point in college,” Morgan said.

After graduating from Saint Michael’s, Marr and Morgan have two different visions for their respective futures, but both believe that their research this summer will serve as an invaluable resource.

Currently Marr hopes to attend graduate school abroad, but is undecided on her topic of study. “The goal is to end up in either the United Kingdom or Ireland. I’m currently stuck choosing between a Master of Fine Arts in Poetry and Publishing and master’s in English, looking more into literature and literary theory,” she said. “Choosing one has become something of a Herculean effort, but I’m sure this project will help bring clarity to this decision for me.”

For Morgan, she hopes to work in publishing in the future and believes that this project will allow her to understand both the writer’s and publisher’s perspectives. “To whatever end we get the book, I definitely think watching that process of a book kind of ‘birth itself’ would be really cool and helpful in my future. I think I’d be able to be a lot more empathetic and sympathetic to what authors want since I’m currently putting myself in the position of an author writing a book,” she said.