For Humanities Center event, Middlebury Professor Jeffrey Buettner shares experiences since his 2010 Fulbright as a scholar, artist and friend in now-embattled eastern part of nation 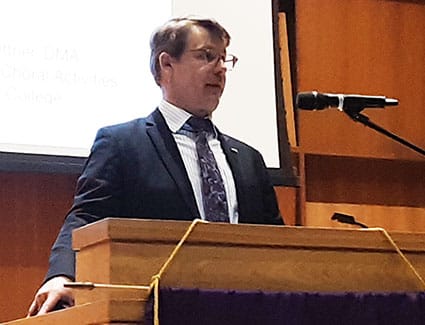 “We won’t care about something we don’t know about,” said Middlebury music scholar Jeffrey Buettner, whose lecture Thursday at Saint Michael’s College on “Choral Music of Ukraine and Ukrainian Roma” importantly imparted a more fully human and cultural understanding of a people now under siege by Russian forces.

Professor Buettner’s talk in the McCarthy Arts Center Recital Hall was part of this year’s Saint Michael’s Humanities Center lecture series, and drew from the speaker’s close experience among Ukrainian musicians and students in travels to Ukraine for research over more than two decades. The guest speaker’s good friend Nat Lew of the Saint Michael’s music faculty said in Thursday’s introductions that Buettner was a 2010 Fulbright scholar at Kharkiv State University of Arts, where he conducted the University Choir and taught choral music there, coming to know and appreciate the people and culture and making new friends along the way. Christina Root of the Humanities Center opened the program by introducing Lew and noting the timeliness of the day’s topic, given present headlines and the ability of humanities study within the Saint Michael’s mission to promote deeper understanding of the world.

Buettner’s visit was made possible also through the generosity of the Marc and Dana vanderHeyden Endowment in Fine Arts. William Ellis of the music faculty and Crystal L’Hote of philosophy contributed to arranging the program through the Humanities Center.

PowerPoint slides that Professor Buettner projected behind him as he talked showed images from his time in Ukraine or in some cases aided understanding of his musical insights – he had vivid slides showing everything from sheet music of the piece he played audio from to beautiful Ukrainian architecture or more austere Soviet-era buildings, and images of choral groups he had encountered, often wearing distinctive Ukrainian or Roma costumes.

The first half of his Thursday lecture focused on his study of Romani culture, or what more commonly are known as “gypsy choirs,” though he acknowledged the term “gypsy” could be inappropriate in certain contexts, depending who is saying or hearing it, as a middle school student pointed out to him in a Middlebury talk recently.

PowerPoint slides accompanied the talk, as with this opening image.

His intent in his Saint Michael’s talk, he said, was to share some of his experience in the Ukraine as he has come to know the nation and its people– “anything and everything.” One aspect of that nation’s culture holding his scholarly interest continues to be Roma music. He told the history of so-called gypsy choirs going back to performances that families would do for royalty in the 1600s as a means of cultural transmission of identity while allowing for showmanship, which in turn allowed Roma musicians to be hired to make money and have a place in society and protect their lifestyle long-term.

He explained roots of Ukrainian Roma – a long-ago migration from northeastern India through Europe by the 16th century morphing into a European cultural ethnicity, mostly assimilated into residential life —  especially from the Soviet Union period. He told of the Romani relationship with other Ukrainians, generally mutually tolerant thought sometimes with some tensions. The speaker described the characteristics of the Roma songs themselves: full singing tone, ornamentation of a melody, a folk music tradition taught and learned by rote, familiar Western tonal harmony similar to local folk music, with accelerandos adding intensity and a vehicle for virtuosity, as well as the music being a vehicle for cultural transmission.

The style’s earmarks, then, are flamboyance, virtuosity in presentation and an attempt to hold interest while teaching something through performances  He gave some examples, sang some passages himself with his beautiful well-trained voice, and played some examples from his computer that represent Romani life and world view.

Since Romani music was a Soviet sanctioned form of entertainment with even a theater for it even in Moscow, he said, the musical formed survived through the Soviet period with equal vigor in Ukraine and Russia. The examples he played had two or three voices harmonized over a guitar, telling stories with flourishes on themes such as having a police official take away one’s papers and the trouble it causes. He noted a Western pop influence in some vocals, and said gypsy choirs developed out of family groups as Roma theater grew in popularity.

He showed slides of such choral groups: family photos, with bright costumes, or a children’s group in Kharkiv including a professional singer with his own band. The shows are typically “exuberant and fun,” he said. He made an interesting comparison of the cultural presentation inherent to the Roma music that he studies to R&B songs of the 70s and 80s in the U.S., such as Marvin Gaye’s “What’s Going On,” which in both cases have deliberate efforts of establishing a certain unscripted free-flowing mood for a recording.

The next part of his talk jumped to an entirely different music tradition that he also studies since his time in Ukraine: Ukrainian choral music. Aspects he has studied and shared about are the art music tradition and history, sacred music (a cappella), and secular music, especially in recent decades. He briefly described Ukrainian church music history dating back into the 900s to provide context for later choral traditions.

As to art music traditions, he said it is important to consider that, with Ukraine’s cultural identity currently under fire, he came to appreciate in preparing his talk that choral music scholars for at lest 25 years or more now “have deliberately positioned Ukrainian language in their art music.” This perhaps reflects a prominent Ukrainian take and cultural pride on the question of whether Russians and Ukrainians “are really all one people or not” as Russian leaders have suggested in explaining the invasion, he said, noting that this is a discussion that dates back to before the Soviet Union even.

The last half of the talk was on Ukrainian choral music.

He played beautiful YouTube videos of Ukrainian choruses singing such signature pieces as a Liturgy of St. John Chrysostom, a Kyrie and a piece “O Lord, Hear My Prayer,” with low bass counterpointed with soaring soprano as typical for the style.  He told of leading Ukrainian composers of such music up into the present. He said one piece he played reminded him of choral music of the 1970s-80s in Europe or Nordic countries. One song he played a video in performance was the familiar melody of the popular American Christmas “Carol of the Bells” but with words in Ukrainian since that is the cultural origin of the melody, which many Americans do not realize – and this original version was more of a new year’s carol or piece to welcome spring.

He wrapped up by talking of his time in Kharkiv as a Fulbright — meeting students and their families and making friends, and how many of them, who were then children in a chorus he directed, grew up to get music jobs, including a conductor of one of the pieces he shared a clip for the audience of about 50 to hear. It was a folk song about a fox. The last piece he played for the audience was an utterly arresting choral folk song from 1958 with the lyric “I light a candle against the sun,” which was unlike anything most of the audience had heard before.

In a question period after the lecture, Edmundite Fr. Richard Berube from the audience noted similarities in the Roma music to Klezmer music or even mariachi. Buettner acknowledged that the connection with Klezmer is very real with musicians frequently trading licks and other aspects of their respective styles while also playing similar venues in Ukraine such as at weddings making for an organic overlap.

Nat Lew asked Buettner if he knew what has been happening to any of the friends he stayed in touch with from his time in Ukraine. The speaker said the few he has managed to contact all seem to wonder if kids will ever go back to school at any level since they live in the most embattled eastern regions where Buettner was more than a decade ago. (He has returned for his research since), since now those families report they must only stay in basements or try to get out of the country.

The speaker, left, chats with an audience member, center, and Nat Lew, right, after the talk.

Buettner said during his Fulbright year, he lived not far from areas where now some people he knows are simply trying to avoid shrapnel coming in windows much less living any semblance of a once-normal life. One family he knows have a 12-year-old child, and the mother and child got to Slovakia, but the husband must stay and fight, so they are separated — a common situation.

He said another family he knows had been living in the now nearly flattened Mariupol, and he has no word nor much chance of getting word about their present situation. “Since I met people when I was there, now I am very worried about them,” he said. “It’s going to be a long time before we see more of what we saw in this presentation” in terms of schools and arts performances functioning in Ukraine. Thursday’s lecture made the sadness of that cultural deprivation more palpable to attendees.

Buettner closed by saying people can help by continuing to support vital relief efforts, such as what he and Lew did last weekend as leading participants a benefit concert at Elley-Long Music Center. “I can tell my friends you came to this event because it says ‘we care’ and even that means so much, when you tell someone you’re thinking about them,” he said. “It makes a difference. It is a sustaining thing.”

Summer will see Saint Michael’s students learning around the globe