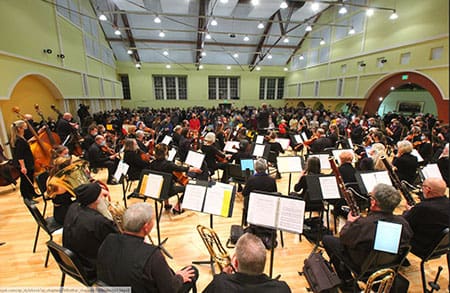 It was a full house during last Saturday’s benefit concert for Ukraine in the Elley-Long Music Center. Nat Lew of the Saint Michael’s Fine Arts/Music faculty is standing between the orchestra and the audience center in this image. That’s also him at right in the large image behind the photo.

Nat Lew, Saint Michael’s professor of music and director of the Honors Program, presided over a large-scale fundraiser for Ukraine at the Elley-Long Music Center on the North Campus of Saint Michael’s College (at Fort Ethan Allen), on March 19 in cooperation with some fellow musicians.

This benefit concert, with the Green Mountain Mahler Festival and Vermont Youth Orchestra as co-sponsors, was a smashing success, Lew reports, raising nearly $40,000 for medical relief for Ukrainians both in Ukraine and refugees.

Said Lew: “We had about 80 singers, and an orchestra of similar size. We held a lunchtime rehearsal, with the chorus in the large rehearsal room and the orchestra on stage, took a break, then held another similar rehearsal. At the end of the second rehearsal, we marched the chorus into the auditorium and rehearsed the Ukrainian National Anthem, which was the only piece that called for both ensembles together. I would estimate the audience at around 300. They were very engaged. Lots of people came wearing blue and yellow.”

“The speeches from the two students were, frankly, devastating,” Lew said. “They spoke about what their families and friends back in Ukraine are going through.”

Then came the music:

Continued Nat Lew about the March 19 benefit: “The conductors spoke briefly before some of the pieces. Jeff Buettner, who has worked extensively in Ukraine, spoke movingly about the singers and performers and conductors from whom he collected the songs we sang.

“Audience members and folks who could not attend had already started donating funds online before the event. We had a QR code on the program to make it easy for audience members to donate through PayPal, and we also had tables at the entrance for folks with cash or checks. At the orchestra re-seating break before the Gliere, some audience members asked if we could reopen the tables so that they could make a second donation!

“The whole event was incredibly powerful and moving. At the end we all stood and sang the anthem twice: first just the chorus sang, so the audience could pick up the tune, and then we invited everyone to sing. (We printed the words in Ukrainian and transliteration, with a translation, in the program.)

“As of yesterday, we have collected $28,000 in individual donations, plus the $10,000 from Mark Kuprych’s charitable fund. Since we have a few donors who are putting together special donations later, it is possible that when we close the books we will have raised $40,000 for medical relief for Ukrainians both in Ukraine and refugees,”  Lew said.

Summer will see Saint Michael’s students learning around the globe