Impressive Katie Petrozzo '17, now a graduate student in Utah, returns to campus where she majored in philosophy and psychology and did extensive research 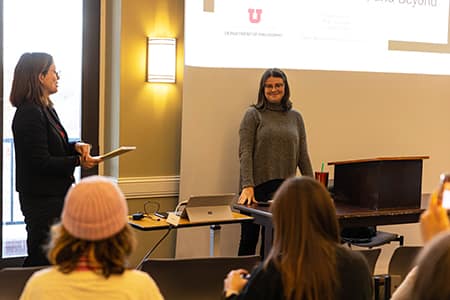 Katie Petrozzo ’17, a PhD candidate at the University of Utah, gave a talk Monday evening titled “Mental Illness as a Life Sentence: the (Mis)treatment of Psychiatric Disorders in the Courtroom and Beyond.” The Philosophy and Neuroscience Departments sponsored the event.

During her time at Saint Michael’s College, Petrozzo double-majored in philosophy and psychology and participated in the Trustee Summer Research project during the summer between her junior and senior years.

The speaker told the audience her aim for her dissertation is to tackle the “proper use of neuroscience in legal contexts, demonstrate consequence of improper use of neural data, and advocate for improvement in science communication.”

Petrozzo split her talk into two parts: First she explained her research for her dissertation before moving on to a Q&A/general advice session for students thinking about furthering their degrees, or who were curious about the Trustee Summer Research program.

The speaker’s research centers around the broad idea of “sanism,” which is “kind of in the same line as sexism and racism; it is the irrational prejudice against people with mental illness,” she said. Specifically, Petrozzo looks at the intersection among psychology, neuroscience, and the law when it comes to mental illness.

In her explanation, she used a fictional case study in order to pose questions to the audience about how mental illness or cognitive disability affects how people are seen in the legal system. A lot of the time, stigmatization of mental illness can lead to either extended/harsher jail time, or, on the other end of the spectrum, leads to the infantilization, assumed reduction of agency, or even animalistic treatment of those with mental illness. Petrozzo’s work aims to “hold people accountable, but not responsible, so as to not reduce their personhood” due to their mental health issues.

Even though scholars might believe that people who should be held less than responsible for their crimes should not be punished the same way, Petrozzo explained, the legal system has very vague standards for the treatment of these individuals, and it often ends up that they are involuntarily confined to psychiatric clinics. She gave statistics that one in four inmates in the U.S. prison system has mental health problems, but only a handful of that percentage actually receive treatment in prison.

Petrozzo identified the terms “rationality” and “irrationality” as the basis for diagnosing mental disorders as a problem area because she and many believe these terms are too subjective. They run up against movements like the Neurodiversity Movement and the Auditory Hallucination Network as well as the question of how one goes about establishing standards for rationality for disorders like autism or ADHD.

Why is the Diagnostic Statistical Manual (DSM) “bad,” and are there other ways to classify mental illness?

Petrozzo explained that the DSM being used in forensic psychiatry and the courtroom was not the intended use of the resource. It was meant to be used exclusively in clinical settings. She also explained that the DSM was “created in the 1950s to determine who was eligible to serve in the Korean War,” and that “homosexuality was in the DSM until the ’70s,” so there’s a lot of prejudicial information in the history of the DSM. Another issue she took with the DSM was that there was a lot of “clustering” of symptoms under different diagnoses which creates a clean division between mental illnesses that does not exist in real life. “The DSM is most effective in diagnosing major depressive disorders,” said Petrozzo.

What are your thoughts on the MAOA gene, a gene that becomes stimulated through trauma and results in a stronger likelihood of aggressive behavior, being a point of evidence in the courtroom?

Petrozzo described a study that was done on the MAOA gene being used as evidence in the courtroom which resulted in a “double-edged sword” situation. They were able to apply less responsibility to the person because of the gene, but the presence of the gene also lowered rehabilitative capacity in the eyes of the jury because of the biological inclination of aggressive behavior.