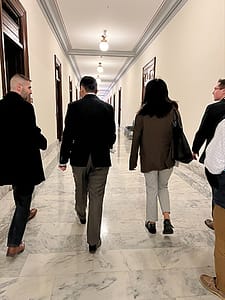 Members of the Saint Michael’s group walking the halls of Congress last weekend.

Fourteen members of the Saint Michael’s College Student Global AIDS Campaign, accompanied by Choeden Lama, the College’s assistant director for the Center for Student Diversity, Empowerment, and Community, were in Washington, DC, November 12-15 to meet lawmakers in the hope of influencing policy on global AIDS issues.

Professor Trish Siplon of the Saint Michael’s political science faculty, the longtime faculty advisor and founder of the campus group, has led similar groups to the nation’s capital for many years, but said her plans to take part this year hit an unfortunate last-minute snag.

“On Saturday morning when we were getting ready to leave I was very ill and had to cancel my participation in the trip,” Siplon said. “I am very sorry I had to miss it, but the others carried on and did a great job under the leadership of Choeden and student leader Jeson Li ’23.”

In Washington, the group met with Saint Michael’s alumna Emily Sanderson ’15, senior coordinator for grassroots advocacy, and Aly Bancroft, associate director for U.S. policy for the organization Health GAP, and together they made office visits to six members of the U.S. Senate and House of Representatives, including the office of Sen. Patrick Leahy, D-VT ’61. U.S. Rep. Chris Pappas, D-NH, personally met with the Saint Michael’s students.

Some of the group members visit the office of Sen. Patrick Leahy, D-VT ’61 on the recent lobbying trip.

Tulasha Pradhan ‘25, a Saint Michael’s public health major from Winooski, VT, said the trip was “a great learning experience and I enjoyed stepping out of my comfort zone alongside my peers advocating on the issue of Global Health Inequity.”

Pradhan said this was her first visit to Washington, DC, and first time participating in lobbying work. “I would like to give a shout-out to the planning committee, and everyone on trip for leading and organizing the trip, coordinating meetings, and making it successful,” she said.

Here are members of the student delegation from Saint Michael’s in Washington with others they met for their lobbying.