She shares about writing process and answers good questions about her novella "The Office of Historical Corrections," which probes truth-telling about U.S. history 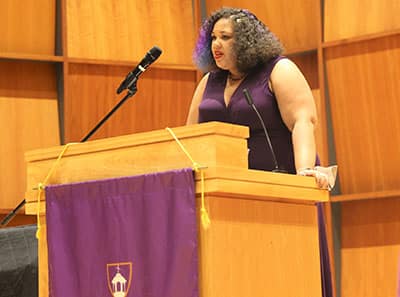 “One theme in this talk was what it means to be a citizen-member of a community,” Vantine told students at the end. “One of the things we think it means at St. Mike’s is to come to things like this and not rally around one idea or version for a story, but to interrogate, reflect together, digest it and think about what it means for you.”

Each year, the College chooses a common text for the incoming class to read and discuss. Evans’ novella The Office of Historical Corrections (2020), contained in a volume alongside six other related stories, is the First-Year Seminar Common Text for 2022-2023. All first-year students read the book over the summer before arriving on campus. A faculty panel discussed the book early in the week for students, and each First-Year Seminar has started to discuss this year’s text in the semester’s earliest class sessions.

The novella “examines how history is often reshaped for the sake of comfort over truth, and she provokes us to think about the truths of American history—about who gets to tell them, and the cost of setting the record straight,” according to a summary on the First Year Seminar website.

Evans’ absorbing and provocative ideas about her writing process as she explores questions of race and wider society came fast and furious. She opened Wednesday’s event by sharing a prepared reflection with extemporaneous asides, including stories from her own personal history to illustrate how we hear and tell stories from varied perspectives. That portion lasted just over half an hour, leading into the animated Q&A session.

The author explained her choice of the novella or short story as her preferred literary form – Evans feels too many writers pad what should be short stories with extra details so they can market a book more easily as a novel. She explained how the common text novella started in very different forms and drafts over many years, versions that she eventually had to set aside since it “started to feel like homework.”

“Being a writer is like being the world’s worst therapist and having yourself as patient,” she said to appreciative chuckles. Several of her shared vignettes illustrated how her childhood informed her later writing – reading drug-store mysteries voraciously, or for years reflecting on family versions of a kindergarten drama involving her mom, herself and a bully that she recounted to make a point on stories and the deeply varied perspectives that can emerge in their telling over time.

It was nearly a full house with first year students flocking to the talk by Danielle Evans.

“I often say all stories tell us who we are and which circumstances and situations fundamentally change us – [they are about] the tension between the past and what we say about it,” said Evans. She talked at some length about how in the novella, she came back to a so-called “passing narrative” – a once common and lately resurgent genre in literature and film involving someone of one racial or perhaps sexual identity “passing” for another, possibly in hopes of making life easier.

Some of her other thoughts on writing during the prepared remarks: “Empathy is the point of the endeavor isn’t it?” she asked. Evans said she initially had the thought that this empathy through her fiction “could be coaxed like a muscle and trained and we’d all be the better for it.” She said she became interested in probing anxiety “and how we live around fear and things we can’t control – fear we are making the wrong choices and they might not matter at all.”

Eventually, though, she “grew skeptical of empathy” as a political strategy, as opposed to “agency,” and she brought her skepticism into her writing classroom, she said, valuing “balance” above all else until that became exhausting and eventually she wished just to remove herself from that whole question. She came to the view that neither agency nor empathy seemed essential to her work, or to “what makes a story a story.”

Evans emphasized the important role of her historical research that informs her stories, telling of a deep dive into an interesting historical controversy between the NAACP chapters in Wisconsin and Chicago in the early 20th century as part of her work on the common read novella.

“I’m really interested in hearing your questions and honored to be part of your first-year experience,” Evans said as Vantine readied to carry a microphone to students who stood to ask questions of the author during the program’s second segment. Students’ inquiries about specific characters and dynamics from the novella clearly showed how closely they had read the story and thought about its characters and possible meaning.

One first-year woman asked Evans if she ever was tempted to expand any short stories into longer work. “The answer is no,” said Evans, saying that every year she has “become grumpier about novels” since in her view they waste so much time in what could have been a short story.

Another student wondered about the story’s dramatic ending when, essentially, one of the main characters decides to go inform a racist white supremacist character that his grandmother was “passing” and, unknown to him, was really Black. The story seems to suggest the white character might have killed the main character named Genevieve, but the student asked if Genevieve did in fact die or was attacked but survived. Evans replied that several “versions” of the story are plausible (much as in historical accounts of events), and “it’s what the writer can’t say.”

A student poses a question to the speaker during Q&A.

The next questioner asked for more reflection on the concept of passing. The author in her answer spoke of encountering “retroactive intentionality” in writing a “passing narrative” that might not intentionally have set out to be specifically that.

A male student asked about a character’s name change in the story and its significance as related to the character’s divorce. A female student wondered about gaps in the historical record – things that nobody would have recorded, raising questions for readers and characters in the story, depending on one’s own understanding.

Another woman asked Evans if there was one character she most saw herself in, or if parts of herself were in all the characters. The author said that “Every character you write, even the ones you don’t like, have some part of you” — and that they “get to do and think things you wouldn’t do or say.”

One student wondered about one of the main characters’ many romantic relationships. Evans, giving insight into editorial give and take during writing, explained how, “The editor said, ‘she has too many boyfriends!’ but I said, ‘she needs all the boyfriends!’”

In answer to another question, Evans told of her interest in probing the idea of friendship and how both main characters in the story, as longtime acquaintances bordering on friendship, have strategies in their lives or tasks at hand that are “doomed to fail, since it is not work you can do alone.”  Yet both approaches readers can understand as “survival strategies, not transformational strategies,” she said.

One questioner wondered if any story from the collection most represents our current American social and political climate. Evans said some stories turned out to be deeply topical as events of recent years unfolded, though she did not intend them to be so necessarily when she wrote them.

In closing, First-Year Seminar Director Vantine drew student attention to how much the author stressed the historical research that went into the novel, telling them, “You’ll be asked to do a lot of research at Saint Michael’s.” He noted that Evans also talked about how choices indicate our priorities — an important idea to keep in mind while pursuing purposeful learning at Saint Michael’s.

“You’re at a stage where many have independence perhaps for the first time,” he said, “and we look forward to being part of that as you come into your own and decide what choices you will make to study and specialize in, and then go out into the world and work in.”

About the common text novella

In The Office of Historical Corrections novella, according to a summary on the First Year Seminar web page, “a black scholar from Washington, D.C. is drawn into a complex historical mystery that spans generations and puts her job, her love life, and her oldest friendship at risk.”

Danielle Evans is an award-winning author and a teacher of creative writing. After majoring in anthropology and African American Studies at Columbia University, she earned her MFA in fiction from the Iowa Writers’ Workshop. Her debut book, Before You Suffocate Your Own Fool Self, is a critically acclaimed collection of short stories about mixed-race and African American teenagers, women, and men and their struggle to belong. This first collection of stories won several fiction prizes.

The Office of Historical Corrections is her second collection, which again won several literary awards and was a finalist for multiple others. Evans is the 2021 winner of The New Literary Project Joyce Carol Oates Prize, a 2020 National Endowment for the Arts fellow, and a 2011 National Book Foundation 5 under 35 honoree. Her stories have appeared in magazines including The Paris Review, A Public Space, American Short Fiction, Callaloo, The Sewanee Review, and Phoebe, and have been anthologized in The Best American Short Stories 2008, 2010, 2017, and 2018, and in New Stories from the South.

Another view of the full house for Danielle Evans’ talk Wednesday.