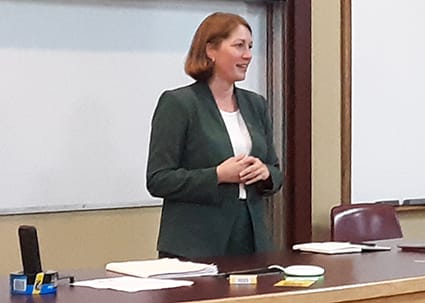 Assuring human and civil rights while meeting essential security and public safety needs at the world, state and local levels has focused much of Vermont Lt. Gov. Molly Gray’s legal and political career.

She told nearly 20 students in instructor Wade Johnson’s Issues in Contemporary Policing class at Saint Michael’s College all about it as a guest speaker on Wednesday afternoon in the large Cheray 101 lecture hall.

Gray started by sharing some of her personal story: Growing up in a Vermont farm family in Newbury, becoming a UVM student-athlete as a competitive skier and working as a Capitol Hill intern with Vermont Sen. Patrick Leahy ’61 and later more advanced duties with Rep. Peter Welch that involved human rights oversight.

That eventually led to her work as an overseas Red Cross human rights worker, then becoming a law student, leading to work as an assistant attorney general probing the St. Joseph Orphanage abuse cases in Burlington, and eventually on to her election as lieutenant governor. She also teaches as an adjunct at Vermont Law School

Johnson, the criminology course instructor who also works with the Essex Police Department, said Gray was one of several guest speakers he has invited this semester to “help with the class dialogue and learning about issue in contemporary policing.” He opened the session by having students share their hometowns, class years and majors, revealing a wide range of geographic origins and academic interests.

Gray said her career path often has focused on properly balancing the inevitable tension between human/civil rights and the ever challenging demands of missions either in armed conflicts around the world or among law enforcement agencies at more local levels.

For her generation, Gray said, the world changed dramatically on September 11, 2001 with the World Trade Center attacks that occurred during her teen school years as one born in 1984. She noted with a show of hands how most in the class were born after 9/11.

“That’s when the world changed for lots of people who started thinking of security in a different way,” she said of 9/11. Gray shared some history of the International Red Cross that she worked for, helping oversee compliance with Geneva Conventions in armed conflicts globally. It led to her interest in a law degree where she might work more directly in this area of navigating tension between protection of human rights and protection of security, as she put it.

She spoke in some detail about her Red Cross training in Switzerland, and about holding private security firms, such as Blackwater in the Iraq War, accountable, spending some time helping students understand what private security firms are and what they do, down to Vermont based firms like Chocolate Thunder Security in Burlington. Topics she touched on included legal frameworks, monitoring, and accountability and grievance mechanisms for different scenarios. In telling of her work on the St. Joseph Orphanage abuse cases, she delved into challenges of statutes of limitations, and of understanding more about restorative justice inquiries. The students showed good understanding of restorative justice from previous speakers in the class.

The talk evolved naturally after Gray shared he personal history into dialogue, with students from the class asking and answering questions. One student journalist in the audience asked Gray about the seeming rise of violent crime in Burlington. The lieutenant governor spoke about how tough a task Vermont law enforcement officials have, day in and day out, with society asking so much of them, from being mental health counselors to carrying Narcan in an almost emergency medicine role.

Yet, she spoke strongly too about the need to limit access to assault weapons while looking for longer term societal solutions in housing, transportation, drug treatment and other “upstream” investments that might get at the root of such rising violence. “We still have individuals with access to firearms who shouldn’t have it, and we need all of you to be advocates,” she said. “We can still have second amendment rights but also have laws that deeply protect public safety.”

A student poses a question to the lieutenant governor during her Wednesday talk.

Gray said it is time to ask, “What ultimately is going to protect human life in this country?” Prosecutors also need to consider if they are charging under the right framework, and she suggested maybe domestic terrorism laws are applicable in some cases and warrant further exploration.

She stated that she believes in understanding, appreciating and supporting law enforcement in these many demands that we place upon them, but also assuring oversight, while advancing programs that might “diminish the role we’ve asked them to play” in society that makes the job so difficult so that law enforcement can focus on policing essentials.

Gray thanked the class for the opportunity to have such productive dialogue, noting it is rare for her to talk personally about her career path. “Whether you decide to stay in Vermont or be a prosecutor or lieutenant governor, know there are lots of ways to impact criminal justice and reform,” she told the Saint Michael’s criminology students before nodding toward Johnson. “So learn all you can from this amazing man.”

As a parting shot, Gray stressed how important it was for students to vote on November 8 for the general election. She questioned them to be sure they all knew essential particulars on how and when and where they might vote, particularly for Vermonters – with a congressional seat, a new U.S. senator, a secretary of state and attorney general races all on the ballot, “this is the biggest year in Vermont politics in generations, so get involved!” Gray said.

Molly Gray interacts with audience members during her talk.