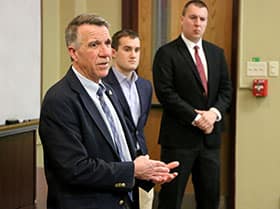 Directly above, Scott during questions and answers as student organizers of the event Ryan Wurmsdobler ’19 and ,Joshua Sumner ’19 listen behind him. Farther below left, from left are Wurmsdobler, Scott, Letovsky and Sumner. (top two photos by Eva Wilton ’19)

The Saint Michael’s College Business Society and the College’s chapter of Young Americans for Freedom sponsored this campus event with the governor. Those groups’ adviser Robert Letovsky of the College’s business faculty assisted the coordination.

The focus of the packed meeting in the College science building’s largest lecture-hall was the Governor’s efforts to encourage more young adults to live and work in Vermont. Letovsky and students from the sponsoring groups — Ryan Wurmsdobler ’19 (Young Americans for Freedom) and Joshua Sumner ’19 (Business Society) — introduced and welcomed the governor.

In his remarks that followed, Scott explained the particulars and rationale behind his priority of growing the state’s economy. He then sought input from students in a question and answer sessions about what measures might convince them to stay in the state after College, since retaining young people is so crucial to economic growth — along with other issues.

Scott opened his remarks by talking about his early experiences trying to start a business when he was in his 20s, specifically, a a motorcycle shop in Morrisville. But he discovered the complex process including state permitting and other obstacles that soon thwarted his hopes, so he went into the family construction business that he has owned for four decades. Scott said he had no political aspirations whatever, yet found himself complaining about a lot of things he saw in government and soon decided that “instead of complaining, maybe I ought to step up.” He ran for state Senate from Washington County and served five terms, all the while also driving as a professional stock car racer, which he feels helped his name recognition in running for higher offices eventually. He thinks too many politicians run for the wrong reasons, and ought to equate their service more with firefighters or first-responders than as a means to more power, he said.

Of his politics, he called himself “a centrist with a balanced approach.”  He said “growing our economy is why I decided to run” for office to begin with, yet “nobody’s talking about the economy” in his view. He lamented that “the knee-jerk answer was always to raise a tax — but in my mind that doesn’t do it … you have to keep the economy strong so you can afford to do that.”

Given this mindset, Scott said he laid down three guiding principles his first day in office as governor: Growing the state’s economy; making Vermont more affordable; and protecting the most vulnerable while restoring faith and trust in government.

He laid out some numbers spelling out the greatest needs in the state: notably, since 2009 the labor force has declined by 15,000 people, “which meant that many fewer potential taxpayers.” Every Vermont county but Chittenden has seen a decline in the number of people working, so even though the unemployment rate looks strong as a number, it only tells half the story, he said, since thousands of jobs are going unfilled.

The state also has fewer students in its K-12 schools than in 1997, and an average loss of three students a day continues. “These trends mean fewer in our workforce and schools, fewer customers in businesses, fewer volunteers for fire departments … and fewer people running for office,” he said.

Many state and local offices are remaining unfilled, or being filled with write-in votes, and unfunded pensions are create growing budget pressures –something his administration is concentrating on rectifying, though it is expensive. Still, to him, it is an obligation. He also  told of a cooperative plan he’s working on with New Hampshire — a paid family leave plan, a proposal that would be an insurance system shared between Vermont and New Hampshire  that participants voluntarily sign into. An initial risk pool would be created by signing state employees from both states into the program. Such a model might show promise in other budgetary and economic areas  in order to realize economies of scale too, he suggested.

“We don’t need more taxes – we need more taxpayers,” he said. So his goal is to develop policies to bring more workers to Vermont; a big piece of that in his view should be emphasizing, through marketing and direct aggressive social media contact to those who visit or show interest in the state, just how great the quality of life and natural resources are in Vermont.  Scott also spoke about health care and insurance and the burdensome costs he sees that evolved with the Information Technology system that his predecessors put in place for ACA mandates for a relatively small number of beneficiaries — he would prefers a plan that shares some economies of scale more, maybe on a regional scale rather than statewide.

Scott talked about a “cradle to career” system of education with more funding  prioritized for early learning and higher education – which ”could be one of the best development tools we could ask for.”  He said he was proud of not raising any taxes or fees while governor, but still sees a need to do more to make it more attractive for companies and individuals to move to the state.

His talk and some audience questions after his remarks centered on the state’s recent offer to pay $10,000 for remote workers to relocate to the state. While he gets some blowback — he’s heard from Vermonters who wish he’d send them $10,000, he said –nevertheless, the bottom line for him is that “incentives work.”

The question and answer part of Monday’s program started with Scott asking what some ways are that might keep the mostly student audience in the state. One woman talked about business and technology incubator projects like at the Burlington waterfront, and Scott agreed with her about how successful such initiatives have been around the state. “I have money in my budget to start more of those – there’s a need for it everywhere.”

Professor Letovsky asked about any proposals that might help graduates of private colleges in Vermont, such as Saint Michael’s, with their student debt issues since so many feel forced to leave to move out-of-state back home with parents to save money while paying down college loan debt. He also noted the plans to close announced recently by several smaller Vermont colleges. Scott replied that he hears lots of talk about what to do about such a pressing problem, which that amounts to 30,000 fewer students coming to the state ,and all the ripple effects of that — but he has heard or proposed nothing concrete so far.

A student identifying as a native Vermonter asked about zoning laws, relating how hard it has seemed to be for some companies to locate in his home town. Scott in his answer talked about all the engineering jobs that he is repeatedly hearing about from leaders Vermont tech companies across the state, noting how he’s told those companies’ leaders, “we have to work with Norwich, VTC, UVM – we’ve got to you some engineers – mechanical and electrical in particular.” One firm told him they have no problem finding engineers whenever they advertise in mountain-biking magazines, taking advantage of the Vermont lifestyle’s appeal to recruit workers, so that insight resonated with Scott as something other companies and the state should emphasize to prospective workers.

In response to other questions, Scott spoke of the potential in cooperating regionally in certain industries throughout New England and into Canada in order to have more competitive clout than just Vermont might have standing alone. A student spoke of the conflicting desires to have more jobs in communities but also to retain the state’s rural character. Scott said one answer is to make housing more condensed in communities like Rutland, “in areas that need and want housing,” which is part of what his proposed trust plan does. “If a town wants growth, let’s alleviate Act 250 and let them do what they want,” he said.

A questioner wondered what specifically might be done to attract more tech jobs, which will be vital going forward. Scott said the great relationship with Canada that he has worked hard to encourage is helping with that given the industries that could complement one another; and he mentioned a firm building electric aircraft in a Burlington airport hangar, and green technologies such as a Williston firm on the cutting edge of large-scale battery storage. He also mentioned the advantages of a plan to offer pre-clearance for travel to and from Canada for Amtrak and for airlines coming into Burlington.

Another student asked whether Scott thought making Burlington a sanctuary city would encourage more immigration for the state to help fill all the job openings that exist. Scott said he wasn’t sure becoming a sanctuary city would achieve the needs outlined by the questioner, but stressed, “we need more refugees and would like more immigration to our state … it’s important for us to be as welcoming as possible …and a diverse culture is extremely important to our state”. He recalled growing up around Barre with its rich ethnic history because of the granite and other industries. “We need people today – you’re on the right track,” Scott said.