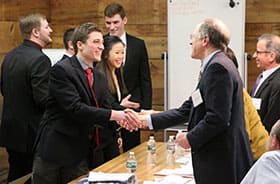 The winning Gold Team of Saint Michael’s College is seen in the photo, judges congratulate them, directly above; below, the whole Saint Michael’s group together including faculty; the Purple Team, and below those, more scenes from the competition. (photos by Professor Fritz Burkhardt)

Sponsoring this presentation round of the statewide Challenge, held February 21 at the Vermont Center for Emerging Technologies (VCET) at the FairPoint Tech Hub on Main Street in Burlington, was the CFA Society of Vermont, and the organizer was Professor Fritz Burkhardt of Champlain College. Teams from Vermont colleges and universities – this year Champlain College, University of Vermont, and Northern Vermont University-Johnson — took part.

This team next will compete against teams from North, South and Central America, April 23-25, at the Americas Regional in New York City for a chance to move on to a later final global competition, also in New York this year. The CFA Society of Vermont covers reasonable travel and accommodations. At last year’s comparable Americas competition in Boston, the winning St. Mike’s team competed against 5,700 students from 85 countries across 1,100 colleges and universities.

For the recent local round, students worked in teams to research and analyze a publicly traded company and then write a research report and make a presentation on their assigned company with a buy, sell, or hold recommendation, said Karen Popovich of the Saint Michael’s business faculty, who attended the February 21 Burlington event.

Presenting to a panel of three finance professionals, two teams from Saint Michael’s College (The Gold Team and the Purple Team) competed against teams from the other participating universities and colleges.  Each team had 10-minutes to present their “buy,” “sell” or “hold” investment decision on Standex International, a diversified manufacturing company located in New Hampshire. Teams were then grilled in a fast and intensive question and answer period. This panel of professionals included Jean Sievert, CFA, director of research at Rock Point Advisors; John Boland, president and co-founder, Maple Capital; and Thomas DeByle, chief financial officer of Standex International.

James Aloisi, a member of the winning Saint Michael’s Gold Team, said the relationships he built through the Challenge were his most important “take-away” from this experience. “Back in September, some of us did not know each other in any capacity, but at this point, I think we would all consider each other close friends. I’ve also enjoyed the opportunity to exemplify what I have learned throughout my education at Saint Michael’s in a real, job-like setting,” Aloisi said.

The project included a 10-page written investment report with up to 20 pages of appendices for company, industry and financial modeling and analysis, prompting Saint Michael’s competitor Branden Young, from Randolph, VT, to say “We all quickly realized that we were going to have to rely on each other which brought us all closer together and helped us make our project the success it was in the end.”

James Modic, a St. Mike’s biology major with minors in chemistry and philosophy from Pocasset, MA, heard about the challenge from some of his friends from last year’s team.  “This competition was an incredible way for me to get extensive training and hands on experience working as an analyst,” Modic said. “Learning how to perform financial modeling along with how to analyze a company’s intrinsic and extrinsic values were skills that I was able to develop and put to the test during this competition. As a biology major, the CFA Challenge was an amazing way to get an in-depth exposure to the world of finance.”

From Greenwich, NY, Alana Parker, who is studying accounting with minors in business administration and environmental studies, spoke about the benefits of experiential learning.  “The CFA Challenge taught me the value of well-organized teamwork and enhanced my analyzing skills. The Challenge also improved my time management capabilities as I was juggling school work and an internship as well. I have built great friendships during the CFA and I am very grateful for this opportunity,” Parker said.

The teams were advised by Saint Michael’s Professor Xinting Zhen, the department’s newest faculty member, who teaches finance and finance electives.  James Modic said Professor Zhen’s guidance was important throughout the entire process.  Faculty emeritus, Professor Joanne Scott, who was the faculty adviser for the 2018 CFA team, said it was “great to see the 2019 students build on their foundation in finance and be so successful.”

Two of the Saint Michael’s 2018 Vermont Local winners, Zack Maroon and Tony Linderson, both from the Class of 2018, supported this year’s team by attending the event. “Both teams were amazing and stepped up their analysis to not include financial models but also random simulation to test their results. The judges were tough and everyone handled the questions really well,” said Maroon. Also in attendance were Professors Steve Doyon and Karen Popovich from the Saint Michael’s Department of Business Administration and Accounting.

Dylan Bernache, from Rockland MA, who will graduate with a double major in accounting and business administration, summarized the event this way: “Our CFA research team was dedicated to putting forth our best efforts when working on this project and I am grateful to have had the chance to work with every one of my teammates. Along with this, our industry mentor and Professor Zhen was extremely helpful and I cannot thank them enough for all of their guidance. This event provided me with the opportunity to learn extensive amounts of analytical tools and research methods that will be beneficial to me moving forward into my future career. The CFA research challenge was an incredible experience and I look forward to representing Saint Michael’s College in the regional competition in April in New York City.”

Professor Popovich said she and the rest of the faculty are proud of this recent achievement by their students.  “Not only was their analysis complex, but their presentation and writing skills are excellent and this experience will prepare them well for graduation in May,” she said.