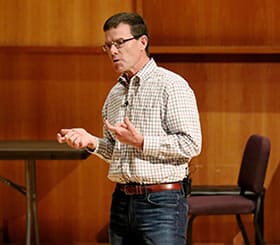 Prominent businessman Timothy Ryan on Thursday (September 12) shared with Saint Michael’s students his knowledge about fostering a diverse, inclusive workplace. The event took place at 7 p.m. in the McCarthy Recital Hall and was well-attended with a large portion of the audience consisting of business majors and students enrolled in business classes.

Tim Ryan is the U.S. Chair and Senior Partner of PriceWaterhouseCoopers, or PwC. Founded in London over a century ago, PwC is among the world’s largest professional service firms. The firm offers auditing, consulting, and tax services, as well as cybersecurity, privacy, and many others. In addition to managing the U.S. firm and its 55,000 employees, Tim Ryan is also a founding member of CEO Action for Diversity and Inclusion. This coalition focuses on educating companies about specific actions they can take to foster an inclusive environment in their workplaces, and is the largest CEO-driven business commitment on diversity and inclusion to ever exist. A busy man, Ryan spends his spare time training to run marathons and caring for his six children, said Steven Doyon of the Saint Michael’s business faculty in his introduction of the guest speaker, brought to campus through the YouCount speaker series and the Department of Business and Accounting along with the Center for Multicultural Affairs and Student Life office.

Ryan was the first in his family to finish college, he told students, explaining that he and his family did not know the professional environment at all. He started by telling about his mother taking him to buy his first suit at Sears. As he boarded the train to Boston, he was nervous and not sure that he would fit in, but felt confident that he looked good in his new Sears suit. Once in Boston, where he found himself sitting in a training room with 60 other people who, like him, were fresh out of college and looking to jumpstart their careers, he noticed that he looked different from everybody else. It was a very hot day, and people started to take their jackets off. “As the first, and the second, and the third person took their jacket off, I noticed that I didn’t fit in. What I noticed was that everyone else had long sleeve cotton white shirts on, and I knew that underneath my Sears suit jacket I had a short sleeve polyester white shirt,” Ryan said.

He continued to describe the embarrassment he felt when the heat forced him to take off his jacket: “I felt like every eye in the room was looking at me, because I didn’t fit in.” However, when lunch came, one of the instructors took him aside to show him the right kind of shirt to buy, and bought for him two long-sleeve cotton white shirts. “What I learned that day was a lesson that will stay with me forever,” Ryan said of the encounter. “I learned that you need to show compassion, and you need to care for people.”

This was one among four of the most important lessons, according to Ryan, that he learned through his experiences in the business world. However, told Saint Michael’s students, “Those lessons that I learned that were very important for my career: doing the right thing, never going it alone, making sure you show compassion and owning up to your mistakes, even if those lessons could have never prepared me for my first week on the job as senior partner.”

That week of July 1 2016 was the same week in which a mass shooting targeting police officers occurred in Dallas, Texas. Five police officers were killed, and nine injured by a semi-automatic rifle. Regarding the shooting, Ryan said “I knew that I had to say something to our 55,000 people. What I did was I sent an email, and what I said in the email was simply, “I know this is on a lot of our minds. We don’t have all the answers. Let’s try to figure it out together, and be here for each other.” What stuck with him was what one employee’s said in his response: “When I came in to work that day, the silence was deafening.” This made Ryan realize that even though the company had won awards and commendations for its diversity and inclusive environment, they had only just begun. His role as a CEO was not, as he previously thought, to grow revenue, but to foster a work environment where people didn’t come in to work feeling like they couldn’t talk about things. This was the beginning of the road that would lead him to launch CEO Action.

“The role of a CEO is tremendous responsibility, not just to your customers or shareholders, but to your communities. And that led me to do a lot of soul searching.”

Ryan discovered that “the role of a CEO is tremendous responsibility, not just to your customers or shareholders, but to your communities. And that led me to do a lot of soul searching.” He and his team decided that businesses have a responsibility to bring other businesses along, and so they asked other CEOs to join them in their effort to create diverse, inclusive communities. In doing this, they asked CEOs to make four commitments: one, to make their workplaces safe places to talk about hard problems; two, to make unconscious bias training available to all employees; three, to share their best practices for everybody with other businesses, because matters of diversity and inclusion are not competitive; and finally, to create a diversity and inclusion strategic plan annually. Though it was difficult to recruit CEOs in the beginning, they kept at it, and there are now 735 CEOs on board with CEO Action.

Ryan concluded the talk by offering St. Mike’s students a couple final pieces of advice: first, that when someone understands what it’s like to be a minority, the “caring gene” takes over, and if you have the caring gene, people will want to follow you. He reiterated the importance of doing the right thing, asserting that because you only have one reputation, an ethical mistake can be impossible to recover from. Third, when you make a mistake — and it is inevitable that you will — just own up to it. Last, know your own value, but don’t take yourself too seriously, he advised. Business faculty and audience members said after the talk that such strong advice will be of great value to St. Mike’s business students as they head into their future careers.