Panel probes impacts of war on our world 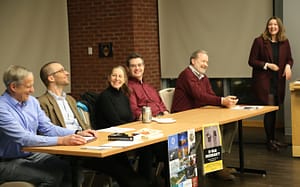 During a discussion in the Roy Room of the Dion Student Center on Thursday, February 20, panelists offered varied perspectives about the negative reverberations of war through the ages, up to the present.

Sponsored by the new campus United Nations Association (UNA) chapter, which is the first campus UNA chapter in Vermont, the panel provided an immersive experience for attendees to learn about war from the perspectives of different academic disciplines.

Brenna Broderick ‘20, the president of the UNA chapter, began the night by introducing the panel and expressing to the audience of about 25 her gratitude for their attendance. The panelists included Jeffrey Ayres, professor of international relations, Patrick Walsh, associate professor of economics, Patricia Siplon, professor of political science, Roberto Saba, scholar-in-residence, and John Reuwer, adjunct professor of peace and justice.

Reuwer began the discussion by highlighting the high financial costs of war as well as its significant humanitarian impacts. “We say we want to protect innocent life, yet the people who care tell us that 9,000 children a day die in the world from malnutrition, and that a small fraction we spend on the amount of war could alleviate most of the problem,” Reuwer said. He went on to discuss the immorality of war as it relates to nuclear weapons, exploring the questionable and costly high priority that governments typically assign to defense as a result of protracted wars.

Further unraveling the concept of power, the political scientist Siplon elaborated on “Gaventa’s Power Cube,” a concept that decodes the manifestation of power in our society and the manner in which power operates. Siplon stated, “We can think about power being organized at the global level, at the national level, and at the local level.” She also explained another way of thinking about power related to the spaces in which power is exercised. For instance, she said “closed spaces” are decision-making sites where people of authority make decisions while outsiders are not involved in this exercise of power. Siplon cited congressional voting and committee hearings as examples of closed-space decision-making.

Laurie Gagne, longtime peace and justice professor and advocate on campus, was in attendance at the panel discussion on war.

Toward the end of the panel discussion, attendees took the opportunity to engage in a spirited intellectual discourse with Walsh, associate professor of economics. Walsh presented global statistics about Gross Domestic Product (GDP) rates in correlation with population changes resulting from war. However, students and a handful of panelists recognized what they called a Eurocentric statistical record that was not inclusive of the African continent. The chart represented a skewed view of reality, some participants in this debate asserted, and they said this called for further intellectual conversation about inclusivity and how global data must be a truer representation of the world.

The night prompted participants to reflect deeply about the detriments of war. Overall, this panel discussion served as a learning experience for both attendees and panelists, calling all to reflect on the catastrophic devastations of war in our political structure, economy, and society.

Another view of the panelists from Thursday’s discussion of war: from left, Reuwer, Saba, Siplon, Walsh and Ayres.