Saint Michael’s College senior Rachel Sullivan has a job lined up after her May 2020 graduation with the Boston office of the major international accounting firm RSM, where she had an internship this past summer. 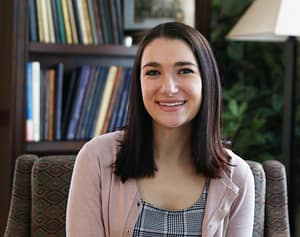 While she’s grateful for an experience that made her so directly employable in accounting — a field her supportive parents urged Sullivan to consider pre-college since they have good careers relating to it — this upbeat accounting and business administration double-major from Scituate, MA, says she equally values her Saint Michael’s life lessons absorbed from being a writing coach, varsity cross-country captain and minor in religious studies. She feels each contributed substantially to her employability and equipped her for a fulfilling life beyond the workplace.

“I’ve found my voice here,” says Sullivan of her Saint Michael’s years. For instance, being a writing coach and religious studies minor productively challenged her to “use both sides of my brain,” she says, “and running is special to me and has given me some of my best friends here.”

“I’m really happy with my choice — it’s been the perfect school for me,” she says. “I was hesitant at first to declare accounting, not so much because I didn’t like the major, but because I didn’t want to just declare since that’s what my parents wanted me to. My dad would say, ‘You want to come out with a skill,’ and that’s true…and I have.” However, Sullivan emphasizes, it is the wider body of her Saint Michael’s experiences, more than just job skills from her major, that make her the person she is happy to be today.

A strong high school interest in writing and English indirectly led her to Saint Michael’s initially, she says. “My AP English teacher in high school was a St. Mike’s grad, Annie Gleba Blake ’08, and we were close, so she  was talking to me when I thought I wanted to be a teacher…and she said ‘what about St.. Mike’s? – I loved it there!’” Sullivan remembers. “That was basically the reason I thought about St. Mike’s.”

Years later, the College’s vital and active alumni network was in full evidence to Sullivan again, such as this past summer during her internship with RSM, since the firm had several Saint Michael’s people in her office, both regular employees and fellow interns. The firm has maintained on ongoing close relationship with St. Mike’s and comes to campus for interviews or presentations frequently through recent years, as do so many major employers.

In high school, Sullivan was an intern for a Scituate real estate firm where she still maintains close connections, so once she was in college she knew the value of interning with RSM in Boston, where she was an audit intern for eight weeks from June to August 2019. She did a tax project under a close mentor, and says a main client was a minor league hockey team, the Minuteman Flames in Carlisle, MA, which she found interesting. On top of exposing her to what accounting is like in the real world, “It gave me a good idea of what to wear in the workplace, what commuting daily is like, and I also loved the senior members of the office with whom I worked – I saw myself doing that down the line, and one woman in particular was a role model; it was cool to see myself doing this.”

“Working with people is so much of what I learned with my internship,” she said. “You can learn the subject matter in class but you really learn how to engage with people through your own experience.” It was a time for her self-described “outgoing and bubbly” personality to be in the spotlight.

Her St. Mike’s alumni connections at RSM include Monica Meunier ‘03, who had known her through Sullivan’s dad since Rachel was a baby, plus Will Meconi ’03, and Will Moriarty ‘20, one of her best friends from St. Mike’s. She also got to know Tim Decker ‘20, a Saint Michael’s hockey player who was a fellow intern.

“Accounting is a hard major and very vigorous, so to have that connection and support and friendship is very valuable,” she said.  “Monica and Will are the reasons I accepted a job so early.” She first connected with Meunier during a sophomore year RSM campus visit. Sullivan said her campus accounting courses prepared her well for the internship and upcoming job because they cover the essentials in-depth, but that her liberal arts studies were invaluable too.

Close personalized mentorship from faculty have been important to Sullivan as well – she mentions Steve Doyon and Tom VanDzura in accounting for keeping her on track and encouraging her toward her career with helpful and specific practical advice while being strong in teaching her about business ethics. Beyond her major, she mentions Joan Wry of the English faculty who had been an early cross country star for Saint Michael’s and so was an inspiration for Sullivan in her running while also inspiring her to excel academically in the Honors College.  “I had a great experience living on the Honors floor in Joyce, and my roommate from there remains one of my best friends here now,” she says.

Strong writing is important for any field, she feels, and that includes the business world.  “Communications with managers need to be well-written and concise,” says Sullivan, whose work as a writing coach and many demanding religious studies writing projects gave her confidence to do any type of assignment.

“Take every opportunity and challenge yourself,” she advises new students. “Get the most out of your education because you need to separate yourself from other competitors in the job — so work on writing skills and on your resume, and foster passions that are going to separate you from others — to actually show up and have that drive, you can’t teach that.” For her, volunteering as a peer tutor in accounting “was a little scary the first time I did I did it, but it helps you brush up on your skills.” Sullivan is proud that she was inducted in the national college athlete honor society, and she strongly feels that participating in varsity sports or even intramural teams builds character and desirable workplace team and leadership skills.

“I feel I used everything St. Mike’s had to offer here, and that I’ve done everything I wanted to do, so I’m proud of that,” Sullivan says. “I didn’t want to settle. I always wanted to challenge myself and to know what I could do.”