It's more practical than a lawnmower for essential job, says Vermont-based farmer who brings them to one-acre campus site; Professor McCabe lends a herding hand 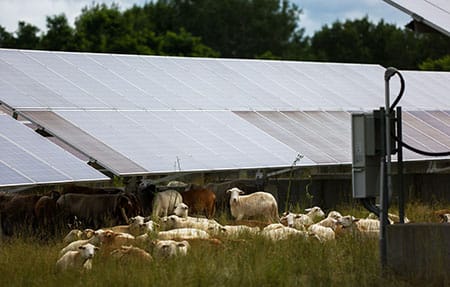 Sheep graze or relax at the College solar array this past Friday, July 16. Photo by Max Rossignol ’22, other photos by Declan McCabe.

About 60 sheep spent most of last week eating, sleeping, and keeping the grass and weeds at manageable heights down around the Saint Michael’s College solar array behind St. Joseph’s Hall by the Winooski River.

Lewis Fox, the Vermont-based farmer who is the caretaker of the flock that came to St. Mike’s from early last week until Saturday, July 17 when they left, said sheep are a more practical way to manage unwanted grassy growth around solar arrays compared with attempts to mow, since sheep are far better at getting in the nooks and crannies of the equipment. A sturdy existing fence around the site at most solar arrays makes them safe from predators and ready-made for the sheep visits. Fox stops by every other day to look in on them.

Encore Solar owns the campus solar site and had been using Fox and his sheep at several of the firm’s sites in New England, so they suggested it for the Colchester site. St. Mike’s officials saw the wisdom and agreed to the idea.

Though the first year they’ve come to Saint Michael’s, “this is the fifth year we are doing this with our sheep, grazing sheep at 22 sites, mostly in New York, one in southern Pennsylvania and three in Vermont,” said Fox. “The first company we starting grazing for is Encore Solar which owns the site down at St. Mike’s and they’ve been really helpful to us and supportive as we make our transition back to Vermont. We like working with them.”

Sheep load up to leave the solar array site this Saturday. Photo by Declan McCabe

Fox said he grew up on a dairy farm around Middlebury before ending up in New York state for about 10 year after school, managing some dairy farms there — “and I ended up getting sheep four or five years ago.” Not long after getting the sheep, he started “grazing solar sites as another income stream for the farm – it made a big difference as far as farm viability goes.”

Now Fox said he devotes much of his time to the enterprise along with a business partner in New York State. He and his fiancé look after and move around groups of their 400 or so sheep to sites from their Leicester farm. “We do a lot of moving sheep rotationally — grazing all the sites we graze since it’s better for sheep health, soil health and gestation health – basically what we do is a landscaping business — we get mowing contracts.”

The idea, he said, is that it is operationally unacceptable to solar-site owner-operators to have grass and weeds grow so high as to cover solar panels. “Sheep are small and sized right and very gentle with the equipment and can get in the low areas better than mowers,” Fox said. Also, solar sites are a great place for sheep to live just generally with lots of shade from the panels. He brings them water in troughs and some needed nutrients when he comes, and otherwise just lets them be, to graze and rest. “They spend a lot of time sleeping in the shade,” he said.

No early risers, he said, sheep typically “get up about 10 a.m. or 10:30 a.m.” — then they graze a while, maybe take a nap, graze some more into the evening, and then eventually go to sleep and do it all again the next day. “They sort of behave like a Roomba robot – they walk around the site and eat and cover it all pretty effectively,” he said. “They’ll do that for a few hours, then go lay down, and then they’re up to graze and will sometimes go pretty late at night, maybe until 11 p.m.”

Lewis Fox coaxes his sheep with a feed bucket .

This particular breed of sheep that came to Saint Michael’s, and which Fox and his fiancé raise in Leicester and transport around, are called Katahdin sheep. “They are known as ‘hair sheep,’ which means they shed wool in the spring so we don’t harvest it; we sell some lamb, but we keep most of them; we’re interested in growing our business and would love to graze more sites in Vermont.” He and his fiancé keep 400 sheep at their farm. They stay put at home once the cold weather sets in.

He said Saint Michael’s is the first college solar site to use sheep in his awareness – the other now is SUNY Cortland, but St. Mike’s was first to bring them in.

Fox explained how he is environmentally purposeful in his sheep-grazing routine at solar sites. “We manage the way that our grazing promotes pollinator habitats, so we have longer grazing intervals to allow pollinator species to flower,” he said. “And then we see a lot of bird species on the site – ground nesting bird and in the racking under the solar panels since they like to build nests there.”

Asked if Biblical passages are true about the sheep knowing the shepherd’s voice and the shepherd knowing his individual sheep, based on his experience, he said it was true for the most part – they hear him coming from far off and turn their heads as he nears.

Fox feels he is in a growing business at this time. “I think as time goes on and more people start doing this, my prediction is we’ll see a lot more solar sites grazed since sheep do such a good job – we will see this as a growing enterprise, integrating agriculture on solar sites. “

These sheep have it made in the shade (of the campus solar array).

With a few years of experience by now, he and his partners have the grazing down to a more precise science. “We know roughly how many sheep per acre per day – it depends on what time of year it is. Generally through the season, we figure three sheep to the acre, and we try to put a higher number of sheep on site for a shorter period of time since it makes more sense logistically, and from the sheep’s perspective.

“If we can leave sooner and let the site rest, we get the best results,” he said, adding that the Saint Michael’s solar site is about an acre – meaning 60 sheep were able to make relatively quick business of it in the few days they were here. “It’s actually the smallest site that we graze,” he said.

Fox has a pickup with a livestock trailer that he uses to transport his “mowing” herd around to sites, and the larger business with his partners has 1,300 sheep “out working” at all the sites they contract with in several states. A sheep’s life span is between one and 10 years, with an average of about seven or eight years, and sheep weigh about 120 pounds on average, though the larger ones can tip the scales at 200. Fox’s sheep are various colors, many white but some speckled or brown and black, but they are all the same breed. “I think they eat about five or six pounds a day while grazing,” he said.

Saint Michael’s College leases the site to Encore so they are fully responsible for its maintenance, said Rob Robinson, the College’s vice president for finance. “Prior to this year they’d done traditional mowing. We do receive credits for the electricity produced, but it’s a fraction of the total, as it’s not our project,”
Robinson said.

Fox urges other farmers to look into the opportunity of merging agriculture and solar energy since “it can be a significant income stream for farmers and a good way to have a symbiotic relationship, so it’s something we’re excited about.” He said the Vermont Department of Agriculture is trying to work with him as part of the American Solar Grazing Association to foster more opportunities.

By chance when Fox came to pick up his sheep from the site on Saturday, July 17, Professor Declan McCabe of the College biology faculty was around, just because he spends so much time at various work in the nearby College Natural Area. McCabe said he ended up learning quite a bit about sheep first-hand, while lending a hand to the loading process. Here’s his account:

A sheep is curious when visitors come around the grazing area.

“I happened to be there when the sheep were being moved out … and ended up helping him load them. Nice guy; he has a gentle way with the animals – very knowledgeable,” said McCabe. “He started out by just shaking a feed bucket and they came running. The first one headed right up the ramp and a bunch more followed.  About half of them were loaded when the latter half of the flock took off back in to the solar array. For those we ran temporary fence out among the solar panels and he again tried the bucket approach, but they weren’t going for it.”

“Instead we flanked them and drove them from behind,” McCabe recounted about the unexpected adventure. “It took a couple of attempts and another fence installation, but we did eventually get them penned close to the truck. He went into the trailer to partition the space and I headed off to wrap up one of the fences. While we were both occupied, the remaining sheep broke out of the make shift pen and we had to round them up again. But by Hook or by Crook (although we didn’t actually have a crook) we got them loaded!”

“There are some prickly plants such as teasel and thistle that they don’t eat so he uses a scythe to take them down,” the biology professor said. “He was trucking them to Saratoga next and they will return to Saint Michael’s in late August or early September.”

In other words …. they’ll be baaaaaaaaack.

Another shot of farmer/shepherd Lewis Fox and his flock from Saturday.