Though taking different paths since 2016 degrees -- one to doctoral studies in New York City and the other to clinician work in Burlington -- both Griffin Thayer and Kristin Mount say they feel well prepared by St. Mike's program

Two 2016 graduates of the Saint Michael’s College Clinical Psychology Master’s Program have only grown in appreciation for their mentors and strong professional preparation in the program now that they have advanced in their careers — one to New York City doctoral studies and the other as a working clinical psychologist in the Burlington area. 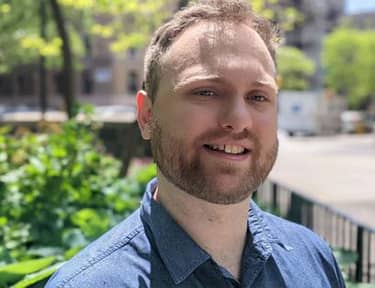 Griffin Thayer M’16, a British-born Saint Michael’s graduate alumnus raised in Massachusetts, completed the College’s graduate clinical psychology sequence after receiving his bachelor’s in psychology and philosophy from Massachusetts College of Liberal Arts. Prior to his doctoral studies, he also practiced as a psychotherapist in Vermont. He has worked in community mental health and has experience with individual psychotherapy, group psychotherapy, family therapy, and crisis intervention.

“I really appreciated the humanistic orientation that St. Mike’s seemed to emphasize in its clinical psychology graduate program, so I applied,” said Thayer, who ultimately chose Saint Michael’s over Columbia University in New York City.

He explained the basis for that decision: “The Saint Michael’s program seemed to be very practice oriented,” said Thayer, who particularly liked its clinical orientation rather than it simply being “a stepping-stone program on your way to your PhD.”

Thayer lauded former Program Director Ron Miller for the human-oriented aspect that Miller brought to the program. “One of the things I loved about St. Mike’s was the fact that you could get to know faculty really well,” he said. In July 2021, Sarah Hastings, PhD, became director of the well-established and respected graduate program once Miller retired.

Currently, Thayer is a doctoral student at the City College of New York in clinical psychology, which he joked, meant he was “overworked and underappreciated.” He described feeling as though he was “ahead of the game clinically” there because of his Saint Michael’s experience, explaining, “I was one of the few people in my cohort that had prior experience with therapy.”

“St. Mike’s really prepared me well for certain areas, particularly understanding the intersection of class,” said Thayer, who also remembered interesting talks about gender and sexuality – “not enough, in my opinion, but there were attempts made that kind of got me going on my own research of it. I used what they offered as a starting point.”

In his current work in New York City, Thayer said, he has encountered more racial and cultural diversity than he felt prepared to encounter. “I had to learn from the start how to diagnose around cultural differences and ethnic differences, he said.

His work now as a doctoral student includes working in several clinical locations as well as doing psychotherapy and psychological testing. He also is working on his dissertation, as well as teaching several undergraduate courses.

Today, he advises students considering the Saint Michael’s graduate clinical psychology program to be aware that the program largely orients toward students wanting to get Vermont licensure and practice in Vermont, more than toward students wanting to go on and get doctorates. Yet, he said, even for aspiring clinical psychology PhD students as he was, “what Saint Michael’s offered was a very holistic and integrative program that made you think for yourself in a lot of ways around what kind of clinician you want to be.”

Directly into the profession

Like Thayer, Burlington native Kristin Mount completed her clinical psychology master’s at Saint Michael’s in 2016, so she has some real-world experience to relate back to her excellent preparation while a graduate student.

Saint Michael’s advertises that its master’s program “integrates psychological science and practice to prepare students for professional service at the master’s level.” While Mount was in the University of Vermont’s developmental psychology graduate program after undergraduate studies at Keene State and before that Mount Washington (Hesser) College (both in New Hampshire), a UVM program colleague told her about the Saint Michael’s option as a promising path to satisfy her emerging interest in being a clinician.

“I wanted to do clinical work, but my master’s was in developmental psychology,” Mount said. “I decided to pursue this path rather than look into [Doctor of Psychology] programs.”

Like Thayer Mount appreciated how the Saint Michael’s graduate program delved into issues such as the intersectionality of age, culture, race, sexual orientation, and socioeconomic status through different courses and readings.

“Most relevant to me today are matters of poverty and the common challenge of this cycle and concurrent cycle of intergenerational trauma, which of course has everything to do with age,” Mount said, adding that her current work with children makes obvious these realities learned during her Saint Michael’s studies. She also discussed how populations such as the LGBTQ community as well as different racial and cultural groups are “systemically underserved, biased against, and misunderstood in the clinical psych world.” She appreciates that Saint Michael’s is explicitly addressing these important themes in both undergraduate and graduate courses. “As with most things in life, you get out what you put in with this program,” she said. “It really will be your best preparation.”

Mount encouraged anyone interested in the Saint Michael’s Clinical Psychology Master’s program to take their time and consider the rewards and the challenges that psychologists meet in the field.

“I have literally looked back on my decision to do this work and feel so fulfilled at being able to make a real difference in people’s lives,” she said. “If the idea of helping others excites you, go for it!”

Mount was up-front about the fact that clinical psychology “is really challenging work” but also commensurately rewarding. “You will see some really unsettling things in the field, some of people’s ugliest parts,” she said. “You need to be prepared to hold that for others… This is the most rewarding work.”

Today Mount is a licensed psychologist and teaches a graduate psychology course at Saint Michael’s. She also is now doing the clinical work that she initially sought out, with children at a mental health agency – “though with a possible upcoming shift to private practice.” She said the work allows her to help others “in a manner that is a good fit for who I am as a person and clinician.”