Beautiful painting is a gift from Brian Lacey '72, a former student of the beloved humanities professor who profoundly influenced his life and career 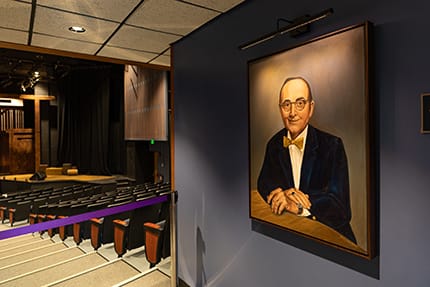 The newly dedicated portrait of Henry Fairbanks greets patrons arriving at the McCarthy theater. In the large image behind the headline, from left, Chuck Tobin, President Lorraine Sterritt and Jeffrey Trumbower with the portrait Thursday evening. (all photos by Patrick Bohan)

A ceremony Thursday in the McCarthy Art Center lobby dedicated a portrait of the late Henry Fairbanks, a beloved longtime Saint Michael’s humanities professor who founded Saint Michael’s Playhouse 75 years ago in 1947.

The Fairbanks portrait, painted by instructor Mallory Cain Breiner ’07 of the College’s Fine Arts/Art Department, is a gift by Brian Lacey from the Class of 1972, longtime champion of the humanities and generous supporter of the College.

The brief portrait-dedication ceremony organized by Institutional Advancement Vice President Krystyna Davenport-Brown and the Playhouse Producing Artistic Director Chuck Tobin ’80 took place at 7 p.m. directly prior to the 8 p.m. Thursday night show of Desperate Measures, a musical comedy that is the last of this year’s Playhouse season plays running through August 6. An informal half-hour reception with refreshments preceded welcoming remarks from Tobin, followed by brief remarks about Fairbanks from Jeffrey Trumbower, vice president for Academic Affairs, and from Saint Michael’s President Lorraine Sterritt.

Jeffrey Trumbower speaks at the ceremony.

President Sterritt and Trumbower both spoke of the profound influence Henry Fairbanks had on the portrait donor Brian Lacey, from his Saint Michael’s student days forward, whether in his globally aware worldview or notable success in business.

Through Lacey, the Fairbanks “legacy continues” Trumbower said. President Sterritt told how she personally recruited Lacey to serve on the College Board of Trustees as she came to know him and appreciate his many strengths, privileging her and Trustees personally to hear his eloquent accounts of being inspired by a favorite professor in Fairbanks, who “taught by word and example.”

An inscription on the plaque reads “Henry G. Fairbanks — A gracious and beloved teacher with a soaring intellect, gentle spirit, and generous heart. Founder of Saint Michael’s Playhouse.” The portrait will hang on the blue wall to the right as one enters the McCarthy theater space itself, in the well-trafficked back entry space behind the seats.

Trumbower mentioned that he looked it up to confirm that Fairbanks taught at Saint Michael’s from 1946 through 1981. Tobin recalled memories of encountering Fairbanks, who died in 1987, when Tobin was still a theater student on campus in the late 1970s. “It was such an honor to encounter Professor Fairbanks, said Tobin, who visibly showed emotion as he read from this year’s program dedication to Fairbanks.  “He had such gentle charisma and old world elegance.”

Here is text from that dedication honoring Professor Fairbanks:

“The 2022 theater season is dedicated to Henry Fairbanks. A gracious and beloved teacher with a soaring intellect, gentle spirit, and generous heart. Founder of Saint Michael’s Playhouse. Seventy-five years ago, Henry Fairbanks, a newly hired Saint Michael’s College humanities professor, had the idea to create a professional theater company that would bring to Vermont the best talent in the theater business to produce the highest quality theatrical productions while offering theater students an unparalleled opportunity for theater education.

Henry, along with his friend and colleague Eliot Duvey, famed director of the Boston Tributary Theatre, worked with officials at Actors’ Equity Association in New York to assemble a professional theater company which would operate in residence at the college. From countless discussions and rounds of negotiations, a new professional theater company, aptly named Saint Michael’s Playhouse, emerged. On opening night, June 30, 1947, the Playhouse was ablaze with colorful lights. King-sized, flashy cars of the era pulled into the parking area on the lawn while excited theatergoers in evening dress mingled on the grand porch of Austin Hall anxiously awaiting the Playhouse’s premiere performance. As the show ended and the curtain came down, five-hundred first-nighters rose to their feet and applauded for a dozen curtain calls. A Vermont tradition was born. Now, hundreds of productions and more than a million audience members later, Saint Michael’s Playhouse continues with actors from Broadway, Off-Broadway, and regional theaters, along with a stellar pool of professional actors from the Greater Burlington area. For seventy-five years the Saint Michael’s Playhouse stage has created thousands of magical summer memories. Thank you Henry for the magic, and for the memories. We are honored to be part of your legacy.”

Saint Michael’s leaders including, from left foreground, Angela Armour of Alumni & Parent Relations, Kristen McAndrew of Enrollment & Marketing, John Devlin of the Fine Arts/Theatre faculty and a Playhouse leader, and Jeffrey Trumbower of Academic Affairs, at Thursday’s ceremony in the McCarthy Art Gallery. Images behind them on the wall show the Playhouse in its earliest days after its founding by Henry Fairbanks in the late 1940s.