"My professors taught me indelible lessons ... about how exciting a life of the mind is -- That’s the central lesson when you get to work with professors of their caliber in small classes. To me, that’s what St. Mike’s was all about.” 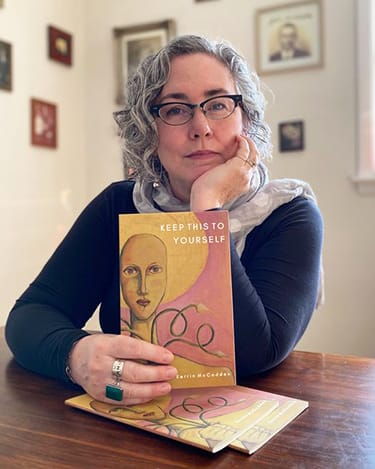 Kerrin McCadden ’88 with one of her poetry books.

“Take a new road. Make a new road” veteran English teacher and prize-winning poet Kerrin McCadden ’88 tells young artists looking to publish their own work. “You get to define the field now.”

McCadden graduated from Saint Michael’s with a bachelor’s in English before going on to get her MFA from Warren Wilson College. She was selected this July as the 2022 recipient of the Herb Lockwood Prize in the Arts. McCadden is a lauded poet and the ninth Vermont resident to receive the $10,000 Prize since its foundation in 2014.

According to the Herb Lockwood press release on McCadden, “The Prize recognizes artists who produce significant work in the areas of visual arts, music, writing, drama, dance, film, and fine woodworking – while also having beneficent influence on the Vermont community.”

Originally from Lexington, MA, McCadden has lived in Vermont since her college years. She was drawn to Saint Michael’s College because of “the size of the school, the adventure of going a little way away from home, and the impression I got that I would matter to people there,” she said. Even after flunking out after her first year, McCadden stuck to her gut feeling that Saint Michael’s was the place for her. “That wake-up call lit a fire under me, and working my way back to St. Mike’s was the life lesson I needed,” she said.

It was after attending Middlesex Community College for the fall of her sophomore year and earning a 3.9 GPA, that McCadden really felt that she learned how to be a student. She had entered Saint Michael’s as a French and business double major, but after returning to Saint Michael’s on academic probation, she switched her major to English. “It was during this transition time that I learned how to be a student – a real learner. I also learned that what I really wanted to do was study literature,” she said.

Professors Lorrie Smith, Will Marquess, Nick Clary, Cary Kaplan, and Kerry Shea were some of the professors, many in the English department, whom McCadden believes had a large impact on her studies and life outlook. “I was really interested in contemporary poetry, primarily, as well as women’s literature,” she said. “I learned what it meant to be a feminist at St. Mike’s, and I’m forever grateful.” She ended up graduating on time on the Dean’s List in 1988.

Her time at Saint Michael’s was full with incredible friendships and realizations about herself and the world around her. “I learned so much about myself and about human nature from living on that campus,” she said, “there are so many memories!” Not only did her peers make an impact, but her professors were a significant reason she fell in love with the study of literature. “[My professors] taught me indelible lessons – all of them about how exciting a life of the mind is,” she said. “That’s the central lesson when you get to work with professors of their caliber in small classes. To me, that’s what St. Mike’s was all about.”

McCadden had been writing poetry even before her transition to an English major at Saint Michael’s. She identified poetry as her way of pushing the boundaries of art. “My own poetry has always been a conversation with rule breaking. I’m not saying that I’m a wild rule breaker in writing, but that I’m always thinking about where the edges are in art,” she said.

McCadden taught at Montpelier High School for almost 30 years before recently switching jobs to teach English at The Center for Technology, Essex. “It’s really great working with students who are as focused as our CTE students are,” she said. Her favorite poet to teach her students is “an impossible list to make” – however, McCadden did name Ross Gay as a consistent poet that she features in her classes.

McCadden’s poetry speaks to loneliness, she said, but not in a sad way. The human experience of always being alone with ourselves is a common thread she can identify throughout her works. “Making that relationship sacred feels like the work of my poems,” she said. “Who am I as I walk in the world? How can I translate my brain’s language, perceptions, and wonder to the reader?” She also categorizes many of her poems as autobiographical to a degree, though she takes liberties with the speaker in her poems in that the speaker “is also a fictitious version of [herself].”

McCadden is not sure how the Herb Lockwood Prize in the Arts will provide her with more opportunities for publishing, teaching, and writing, but for right now, she’s simply appreciating the recognition.

“People always talk about awards being ‘deserved.’ I don’t know about that. In Vermont, there are piles of artists,” she said. “There’s a richness, a density in all the arts in Vermont… So, this award could always go to a number of people. We work together in Vermont, so it feels strange to be singled out, but I am incredibly grateful, and very humbled by the recognition. I think the greatest gift of this award is its momentum, the way it tells me to keep going. That this work matters.”