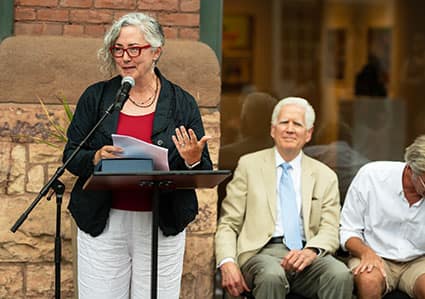 Kerrin McCadden ’88 speaks at Wednesday’s ceremony on Church Street outside Burlington City Arts after receiving her prize. (photos above and here by Andy Duback)

Vermont poet and teacher Kerrin McCadden, a 1988 Saint Michael’s English graduate, is this year’s recipient of a prestigious award and $10,000 prize to honor achievement in the state’s arts community.

The Herb Lockwood Prize aims to reward the pinnacle of arts leadership in Vermont by honoring the state’s most influential artists. The Prize recognizes artists who produce significant work in the areas of visual arts, music, writing, drama, dance, film, and fine woodworking—while also having a beneficent influence on the Vermont community. The recipient of the 2021 Prize was Latin Jazz musician and teacher Ray Vega from South Burlington,

McCadden said Friday she has stayed connected to Saint Michael’s through the decades since her 1988 graduation in various way, including doing poetry readings at the College at the invitation of her longtime faculty friends, recent emeritus Lorrie Smith and the late Will Marquess (for whom she also was a guest in creative writing classes). She also remains close with her former Saint Michael’s English professors (now emeritus), Nick Clary and Carey Kaplan, and was invited to read at a ceremony of recent years honoring the eminent late faculty poet John Engels, whose son is her friend. McCadden also took a Saint Michael’s graduate class.

Said Clary, “As chairman of the Humanities division at Montpelier High School, Kerrin had invited me to visit her Honors Class in Shakespeare to speak about Hamlet and the multiple-text question. She had known I was familiar with it as a member of editing team working on the Variorum Hamlet edition. I was delighted to see how bright her students were and how much they loved her as their teacher. The rest of her story is history, and what a history her story continues to be.”

About Herb Lockwood: According to publicity about the award from Todd Lockwood, “Herb Lockwood was an inspirational figure in the Burlington arts and music scene in the 1980’s. His impact on the region’s arts and artists has proved to be enduring and profound. The breadth of art forms he practiced, and his influence on other artists in all manner of disciplines, created a legacy that remains inspirational decades later. The Herb Lockwood Prize seeks to recognize artists of comparable creativity and influence.”

What follows is a tribute to McCadden by author Stephen P. Kiernan from the ceremony that includes mention of her Saint Michael’s years:

“In her poem Second Cut –which is about haying, but manages to be about many other things as well –this year’s winner of the Herb Lockwood Prize provides a definition of a poem: … a thing full of blackbirds bolting from the maple, hermit thrushes, always in pairs, first one, then the second, that hawk sailing over it all, this day so hot, it’s like a painting. That definition accurately describes this poet’s verses, too: humble but energetic, keenly aware of nature, mindful of what might be soaring overhead. And all of it informed by the escaping blackbirds of imagination”.

This year’s winner McCadden went to Saint Michael’s College, and promptly flunked out. After a stint at Middlesex Community College in Massachusetts, she returned to St. Mike’s and graduated on the dean’s list.

The length of this list might convince you that this writer is prolific, but her body of work is not immense: a chapbook called Keep This to Yourself, the collection Landscape with Plywood Silhouettes, and her latest, American Wake. Yet the acclaim she has received would seem more fitting for someone with twice as many books: a National Endowment for the Arts literature fellowship, inclusion in Best American Poetry 2012, winning the inaugural Vermont Book Award, and this year qualifying as a finalist for the Vermont Book Award and the New England Book Award.

Two of her poems were included in Roads Taken: Contemporary Vermont Poetry, the excellent collection edited by Vermont poets laureate Chard deNiord and Sydney Lea. Todd Lockwood said: “this book, by the way, demonstrates the astonishing poetry being written in Vermont these days, especially by women. Get your hands on this one.. . What are her poems like? They blend muscular directness with apt metaphors. A poem about, perhaps, an ex-lover, begins this way: Dear train wreck, dear terrible engines, dear spilled freight, dear unbelievable mess, all these years later I think to write back.”

“The emotion of these lines occurs with incredible density – disdain for the person, symbolism for the damage that happened, and some new feeling that makes the poem possible. Too much contemporary poetry is secretive, opaque, rendered in a private language. Not this year’s prize winner. She writes poems that seek to be understood. That is especially true in her book American Wake, its title a play on the Irish Wake. This book concentrates on two themes that in hands with lesser skills would be sentimental, and in this case lead to everything from epiphany to heartbreak: a return to her family’s origin lands in Ireland, and the death of her brother from a drug overdose. Isn’t it time, unfortunately, for American culture to have a poetry about opiates? One that is courageous and strong? And isn’t the search for home and history part of how we reckon with the strangeness and displacement of these times? These poems wrestle with difficulty, and do not always find joy. But they do discover, and enlighten, and name with fierce precision. The heart of her work is serious in a way we cannot resist and cannot help admiring.

Kerrin McCadden with one of her published poetry books in 2020.

Here is a portion of her poem “Weeks After My Brother Overdoses,” which manages to be both personal and societal simultaneously: I keep thinking, I am not a sister anymore. … No one will let me have my sadness, or tally what I’ve lost. I make lists like recipes for how to go on alone. I draw his death when I doodle, making little crime scenes, as if this epidemic were a murderer, a suspect, a criminal. I draw him on the sidewalk to inflate the numbers, to give my brother to everyone. Inside the outline, I do some math. I add him to seventy-two thousand, and subtract him from me.

Excellence has been a hallmark of every winner of the Herb Lockwood Prize. That is one of the key criteria, that this person performs her art at the highest level of quality. The other essential ingredient is that this person has not worked for herself, only, but has inspired and uplifted and used the arts to create community. This year’s winner has done precisely that, by teaching for 29 years at Montpelier High School, and now at The Center for Technology in Essex.

This profession is notable for many reasons. First, with her credentials, she could be a college professor. Instead, she has chosen to work with writers earlier in their development, when they are fledglings. The newness of their work, and their hopes, requires nurturing, empathy, a light touch. Second, teaching is a tough business these days, from the challenges of remote learning, to the many nonacademic needs that students bring with them to school, to the recent attacks by archconservative media on classes and schools that accept students as they are. But when her automotive tech kids stay late in class, because they are all enraptured by the books they are reading, she goes to social media to crow about the joyful rewards of enlarging young minds. In honor of the works her many blackbirds have created, and in recognition of the many poems we hope lie ahead, on this the ninth year of the Herb Lockwood Prize, we are proud to award it in 2022 to a singular talent and a Vermont treasure, Kerrin McCadden.”

More about The Herb Lockwood Prize:

The Herb Lockwood Prize was founded in 2014 by Todd R. Lockwood and some like-minded friends from the Vermont arts community. The Prize has no application process, and artists do not know they are being considered for it. Nominations are provided by an anonymous network of arts advisors, located throughout Vermont. BCA is honored to administer this prize created through the generosity of private donors. The purpose of the Prize is fourfold: to validate the work of the recipient, to energize that artist’s future, to encourage other artists to work ambitiously, and to honor Herb Lockwood’s memory by continuing his inspirational influence.

From Todd Lockwood about his late brother: “A native of the Adirondacks, Herb Lockwood moved to Vermont in 1982. He gained recognition in a breathtaking variety of art forms: cartooning, painting, writing, woodworking, sculpture, storytelling and tai chi. Above all, Herb Lockwood was a masterful musician. Formally trained on classical guitar, his musical inclinations knew no bounds—whether adapting ancient Irish jigs to a baritone bouzouki, creating a new vocal twist on an old standard, or ripping out riffs on a jazz guitar. The trademark of his work in all cases was discipline, a fastidious attention to craft of the highest standards. Those standards proved to be magnetic. His Burlington home became a gathering place for artists of all kinds. Young people came to him for instruction; older people declared that he had started them singing again after years of  silence. It must be said, however, that Herb Lockwood was also full of the unexpected. He was a connoisseur of the inside joke and loved whimsy. He specialized in finding comedy in darkness and in the mundane. But behind his humor and modesty lay immense talent and even greater compassion. Herb was a loving man, and his art was but one form of his love. Herb Lockwood died in a Burlington workplace accident in 1987 at age 27.”