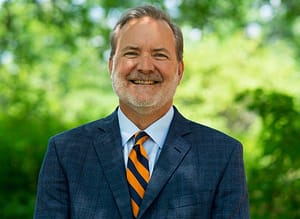 A Saint Michael’s faculty expert on U.S.-Canada relations is an influential voice in ongoing conversations among American and Canadian scholars, business leaders and government officials concerning key lessons from the extended closure of the U.S. Canada border last year during the COVID-19 pandemic.

The border has reopened to “non-essential traffic” on both sides in recent months, said Jeffrey Ayres, professor of political science and international relations and director of the Saint Michael’s Center for Global Engagement, who contributed to a January 28 webinar titled “Reunited States: Onward and Upward.”

This virtual event, sponsored by the New England Canada Business Council as well as the Consulate General of Canada in Boston and the Government of Quebec, was a follow-up to the Border Barometer project to which Ayres was a major contributor last year, writing a section on the border shared by Quebec, Vermont and northeastern New York.

“The idea for this recent webinar was that the start of the new year is a good time to revisit the impact of the border closure, and to reflect on how things have changed now that the border is open,” Ayres said. “The thrust of it was to address questions such as: how did the border closure reshape border communities in New England and Eastern Canada? What are the economic and social prospects for the respective communities now that the border has reopened? What are the continental implications and lessons learned from this region and all across the U.S.-Canada border?

Ayres said he heard near consensus among participants on several key points:

Moderating the webinar discussion was Chris Sands, director of the Canada Center of the Woodrow Wilson Center, a policy think tank in Washington D.C. Other participants included business people from the New England Business Council, some government leaders and other scholars from the earlier Border Barometer study including Ayres.