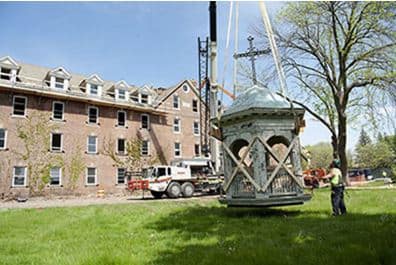 The cupola sits on the lawn by Founders Hall after its removal from the roof late last spring before it headed for restoration.

This coming fall, students and visitors on campus will be able to appreciate a unique symbol of Saint Michael’s history, when the cupola that once sat atop the first and oldest building on Saint Michael’s campus before the College took it down last year — Founders Hall – returns from restoration.

Founders was demolished in the spring and summer of 2021 after many years of discussions, renovations, and attempts to save it. Old Hall, as it was originally called, was home to many students since the College’s founding. Founder’s Hall held residences, classrooms, offices, and a place in the hearts of many staff, students, and alumni as a beacon of the College’s history.

Atop the building before removal or restoration in 2021.

Parts of the building were carefully and thoughtfully repurposed throughout the demolition process. Saint Michael’s College recycling the copper pipes, cast-iron radiators, wires, slate, and bricks was the best way to respect the history of the building while also being responsible about the dispersion of resources.

Most significantly, the cupola that sat atop Founder’s Hall was saved as a historical aspect of the College. Being the Saint Michael’s College logo, the cupola represents a great deal of Saint Michael’s culture, history, and significance to alumni and current students, faculty, and staff.

According to Joel Ribout, director of facilities at the College, “the cupola was installed in January of 1914 for a total cost of $26.” It is currently being restored at Watershed Construction’s facility in Berlin, Vermont, and will make a long-awaited return to the College campus in the fall of 2022.

The original plan was to restore the Cupola to Saint Michael’s in the same place that Founder’s Hall once stood. However, several Edmundites believed that the Cupola was too significant for that space. “They wanted a location that was more prominent,” Ribout said, “so the Cupola will likely be displayed in the main campus green space between Durick Library and the Chapel.”