Howie LeBlanco is all about people, conversations, inclusion

On job since May 16, the first Saint Michael's College director of human resources/diversity, equity and inclusion brings strong prior experience and passion for his work

Howie LeBlanco puts a premium on “people experiences” and healthy collaborations to guide his work and life decisions, so when he saw Saint Michael’s College was seeking to hire its first director of human resources/diversity, equity & inclusion (DEI), the opportunity checked important boxes for him.

For starters, LeBlanco said, he already knew, respected and personally liked several Saint Michael’s admission and human resources professionals – collaborators with him on inter-institutional recruitment and school counselor projects when he was in a previous HR job with Champlain College. One such collaborator was his now-co-director in HR, Kendra Smith ‘09. Both report to Rob Robinson, the College’s VP of finance. 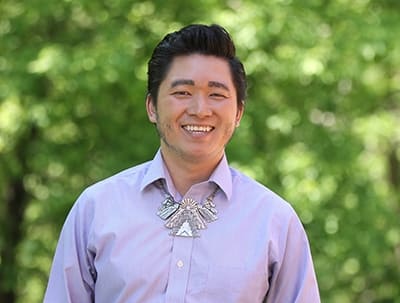 “It was nice to see a familiar face to start on a new team,” said LeBlanco, who spelled out why the DEI work he does in HR is so important to him and for the Saint Michael’s community he joined on May 16.

“When we bring ourselves to work, we don’t check our identities at the door – we bring it all into the space,” he said. “So the question for me is how to create an environment where all can show up as our full selves authentically and cultivate a community where we have conversations with each other, even when conversations are hard – but we have that capacity.”

Also important for LeBlanco was the chance that Saint Michael’s presented for him to combine, in an ideal balanced measure, his equal passions for human resources work and DEI activism, since his most recent previous two positions leaned heavily toward either one or the other.

“I had been in higher education for seven or eight years,” said LeBlanco, a Champlain College graduate — “first mainly in HR work at Champlain. There, I quickly saw that DEI is really going to be important in HR going into the future since it is what the workforce is asking for and needs.” He said he already had spent a decade or so leading diversity and equity inclusion efforts outside the workplace in the wider community and saw an opportunity intentionally to infuse better DEI awareness and activism in his Champlain HR work, which leaders there welcomed though his chief duties remained HR-related.

When the pandemic came along he moved on in 2021 to an almost entirely DEI-oriented job with Vermont College of Fine Arts for whom he could mostly work remotely from his Colchester home as he led initiatives there in the role of the College’s first Director of Diversity, Equity and lnclusion. “I worked across the entire institution, from academics to HR and student affairs,” LeBlanco said. “I helped them create DEI strategies, working with the president and leadership team to set direction.” Along the way, he came to realize that perhaps his most significant contribution would be establishing a permanent DEI-focused position, to “memorialize the importance of this work so that, even if I’m not there, it still continues.”

Now at Saint Michael’s as at his previous institution, he said, establishing a DEI-dedicated position can “set a tone of responsibility that we all have to do this work together, not one person or one office responsible. This is the mindset I am bringing here, and I’m going to need help from everybody.” His first step, LeBlanco said, will be to have listening sessions with constituencies around campus to better gauge needs and desires of the community on diversity and inclusion.

LeBlanco’s supervisor Kendra Smith sent an email to the campus community about her office’s new DEI specialist prior to his mid-May start date, enumerating his impressively relevant resume qualifications and personal qualities for his mission at Saint Michael’s in her view:

“Many of us have already had the pleasure of interacting and working with Howie during his time at Champlain College and are aware of the depth and breadth of experience, insight, strategic thinking, and compassion that Howie will bring to this role,” Smith wrote. “Howie most recently served as the Director of Diversity, Equity, and Inclusion at the Vermont College of Fine Arts, where he helped to establish the inaugural Office of Diversity, Equity, and Inclusion. In this role, he served as a senior leader on the President’s Cabinet and an advisor to the President on decision-making and College strategies grounded in equity, inclusion, and belonging. He also worked in partnership with the College’s Human Resources Department on initiatives around hiring processes, employee relations approaches, talent development strategies, and employee-related policies and protocols. He fostered a culture of learning and among other initiatives, developed an anti-racist curriculum for employees. He led leaders to examine and amend policies, structures, and procedures that create and support inequities and barriers for minoritized people, including those historically excluded because of race and ethnicity.”

Further, Smith said, LeBlanco “formed and led an Institutional Strategic Communications Team, designed and launched a BIPOC Empowerment Series, and the College’s Community Bias Response Program to respond to incidents of bias and discrimination with a restorative justice and educational approach.  Howie earned his BS in Graphic Design and Digital Media and his Masters of Science in Human Relations and Organizational Development from Champlain College.”

“Howie has brought a DEI lens to all of his work and is excited to be able to return to a Human Resources role that will allow him to bring all of his DEI, organizational development, and human relations work together,” Smith wrote. “He will be spending his first several months meeting members of the community and diving into understanding challenges and opportunities for improvement, as well as developing initiatives related to the strategic plan and the goal of intentionally and continuously fostering a culture of belonging. As co-director of Human Resources, he will report to Rob Robinson.”

LeBlanco, who lives with his husband, dog and cat in Colchester, also is a multi-media artist. “I do a lot of painting and photography,” he said, adding that he also enjoys hiking. “I never want anybody to show up at work and not be able to say ‘I have a husband’ or not be able to say ‘my life experience has shown me this.’ I want every employee to be able to say, ‘I can bring it to the community and share it.’ For me that creates a sense of belonging,” he said. “I hope all can say, ‘I do belong to this community, and even if somebody else can’t always entirely understand, they can listen.’”