Beautiful weather cooperates as the College honors first Golden Knight Class with women from 1972; about 750 people attend big party in the 300s field; donations from all classes total $6.4m 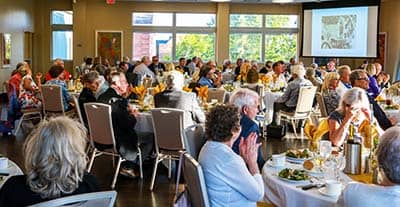 At the Golden Knight Dinner Friday night. (Photos by Patrick Bohan and Will Coppola ’23)

“The weather was amazing!” said Angie Armour, director of alumni and parent relations, of the ideal blue skies and warm temperatures that welcomed alumni to campus with special recognition for class years ending in two and seven.

Armour said class receptions on Friday evening around the greater Burlington area at such venues at Waterworks, Hotel Vermont and the Von Gal Barn were well-attended, loads of fun and got positive reviews from attendees.

The Class of 1972 raised $1.2 million in honor of their 50th reunion – the first 50th year class to include women – and the first to raise over $1 million. Three of the four female graduates from 1972 returned (the fourth was prevented due to medical reasons) to receive Alumnae of the Year Awards: Kathleen Doyle Lacey, Louise Stafford and Carol Botticello Dixon were honored as the first female graduates of the College at the 50 Years of Women at SMC event on Saturday.

Carey Kaplan, Emerita Professor of English, spoke on behalf of the faculty as one of the longest serving – 41 years – and most beloved woman professors on campus. She talked about some of the challenges of being a woman professor in the early days and remarked on the support she received from fellow women on campus and the president at the time, Ed Henry, to embark on the Women in Society Symposium in 1979 with colleague Buff Lindau, the Colleges longtime public relations chief, now retired. The three ’72 ladies “passed the torch” by lighting candles and sharing them with current Student Government Association President KC Onuoha ‘23, SGA members Brigitte Hernandez ’24, and Felicia Fil ’24.  Lindau, retired longtime Student Activities Director Jennie Cernosia, and Professor Emeritus Sue Kuntz, all with remarkable careers and decades of service to Saint Michael’s, toasted to the previous 50 years and the next 50 to conclude the event.

Sue Duprat, longtime Athletics administrator and coach, was the guest of honor at the unveiling and dedication of the conference room that now bears her name in Tarrant Recreation Center. Dr. Mary Horan ’78, Kathy O’Neil ’81, and Pam Batalis ’85, all former student-athletes of Duprat’s and Hall of Fame members, spoke about their experience playing for and learning from Duprat, who then spoke about the transformation of women’s athletics at Saint Michael’s during her tenure and her gratitude for the recognition.

The Purple and Gold Brunch celebrated a large class of Alumni of the Year which included: Jim Phalen ’67, the four ’72 female graduates, Rick Fecowicz ’77, Maureen (Keefe) Usifer ’82, P. Jonathan Heroux ’87, George Bowen ’92, Ian Sutherland ’02, Greg Tobey ’07, Garrett Clark ’12, and Young Alumna of the Year Valentina Rojas ’17. The Fr. Mike Cronogue Award for Service went to Mary Joan Picone from the Class of 1987, who has spent an enormous amount of her life serving others including assisting the homeless and migrant workers.

President Sterritt gets a big check from generous alumni.

Mark Dalton ’72 and Maureen Usifer ’82, co-vice chairs of the Board of Trustees, presented President Sterritt with a check for over $6.4 million from all reunion class years for the past fiscal year. It represented one of the greatest tallies ever, Armour said,  and was “a testament to the faith the Alumni Association has in the College.” She said that citations for those award recipients will be online in the coming days

“The P-Knight Party on the 300s field had an amazing 750 attendees with numerous food trucks, craft beers, hatchet throwing, mini golf, and the Grippo Funk Band perform,” Armour said, adding, “Townhouse parties in the 300s were another highlight of Saturday night.”

Armour concluded by offering “Many thanks to the Institutional Advancement team and the many campus partners that helped make it such a memorable weekend.”

The newest Golden Knights from the Class of 1972 on the steps of the Chapel at weekend’s start.