The sheep are baaaaaack! Earlier this month, farmer Lewis Fox of Leicester, NY delivered a herd of sheep to the Saint Michael’s College solar array behind St. Joseph’s Hall for the second year in a row. During their stay, the sheep will be hard at work clearing the unwanted weeds and grass surrounding the College’s solar panels. 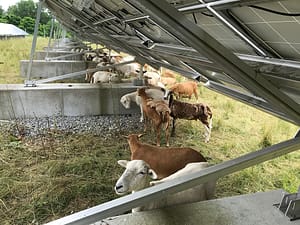 The solar array provides nice shade and shelter for visiting sheep last year as they keep grass and other vegetation under control.

For solar-site owner-operators, it is imperative to maintain the vegetation surrounding their solar panels because when it is left unkempt, it can grow to cover the panels. Given the necessity but also the inherent difficulty associated with the maintenance of solar array herbage, sheep have emerged as an ideal solution.

Due to the small size of sheep, they are able to delicately remove the grass and weeds in the low crevices surrounding the equipment, which typically is inaccessible or impractical for mowers to reach. Additionally, since most solar arrays have strong, pre-existing fences, as does the one at Saint Michael’s, they are ideal locations to ensure the sheep’s safety from predators.

As Fox said in an interview in 2021 with staff writer, Mark Tarnacki, “They sort of behave like a Roomba robot – they walk around the site and eat and cover it all pretty effectively. They’ll do that for a few hours, then go lay down, and then they’re up to graze and will sometimes go pretty late at night, maybe until 11 p.m.”

The sheep will remain at Saint Michael’s for approximately one to two weeks, depending on the condition of the vegetation, and potentially return in August.

For more information, read Mark Tarnacki’s full-story here on the sheep’s first visit to the College in 2021.

The farmer and his sheep last year during their first visit to the solar array — Lewis Fox feeds his flock. (Photos by Declan McCabe)