Weaker trees might be at risk from present infestation, says Professor McCabe, but life cycle of these pests will be at less intrusive next stage in several weeks 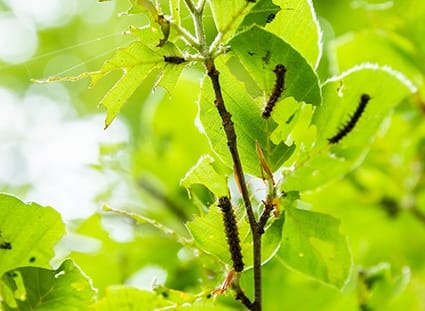 Spongy moth caterpillars are everywhere on trees across the Saint Michael’s campus. (photos by Will Coppola ’23)

The infestation of spongy moth caterpillars has officially reached Saint Michael’s College. Many summer research students and other residents of the campus have noticed an influx of small fuzzy caterpillars strewn across the sidewalks and swinging on silk threads from any branch or eave they can find. This, however, is not a phenomenon to which residents of Vermont are accustomed.

The spongy moth, a rebranded title for the lymantria dispar by the Entomological Society’s Better Names Project, is an invasive species from Europe that has grown out of control in Vermont. In an article in Northern Woodlands titled “A Moth Invasion,” Saint Michael’s biology Professor Declan McCabe describes how they were brought to Massachusetts from Europe in a failed attempt to breed silk worms. They are notoriously hungry and will eat the leaves on trees nonstop, especially in their larva stage.

Not only trees, but brick buildings, are hosting spongy caterpillars these days.

This is concerning to environmentalists and people who enjoy shade because the spongy moth will defoliate trees, particularly favoring oak, birch, and apple trees but enjoying up to 500 different species of tree. In McCabe’s article, he reassured that if the trees are healthy, they will likely survive the onslaught and reproduce their leaves in a “second flush.” However, if the trees are not healthy, spongy moth defoliation is a key factor in tree mortality.

The larval, or caterpillar, stage typically lasts about seven weeks. The larvae are most active during the months of May and June. The individual larvae become pupae in late June on into July and remain in this stage for one to two weeks. Adult moths emerge in late June through the middle part of July and can persist into August.

Saint Michael’s summer students as well as other Vermont residents may notice what sounds like rain hitting the leaves of trees and the ground. However, that might not be rain at all – McCabe says the spongy moth population is so high and they eat so much, that when they release their droppings, it sounds like rain.

Sticky silk from the spongy caterpillars is best avoided by passers-by if possible.