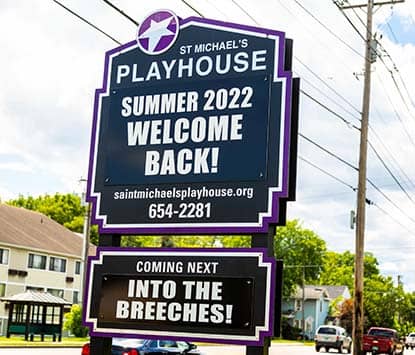 This substantial sign along Route 15 by the Main College entrance welcomes customers back for the Summer Playhouse season and its opening show. (photo Will Coppola ’23)

The Saint Michael’s Playhouse is back robustly after COVID canceled the 2020 and 2021 seasons, and Producing Artistic Director Chuck Tobin ’80 feels a heightened sense of perseverance and joyful anticipation.

“It’s amazing how busy this building is again,” said Tobin of the actors and crews who start arriving this week for the first show, Into the Breeches! (June 29-July 9). Promotions describe it as a “heartwarming and hilarious new comedy” with a “Show Must Go On” spirit. The other 2022 shows are The Mountaintop (July 13-23), “a brilliant reimagining of MLK’s final night” by a Pulitzer Prize winning playwright, and, finally, Desperate Measures (July 27-August 6), “Off Broadway’s award-winning musical comedy,” featuring western-style music and loose homage to the Bard.

To learn more or purchase tickets, go to https://saintmichaelsplayhouse.org/

All the titles of this year’s Playhouse season allude to struggles transcended by people pushing forward and doing what it takes to accomplish a goal. That feels perfectly timely to Tobin and his trusty longtime collaborator John Devlin of the College’s Fine Arts Theatre faculty (production manager and resident designer) given the serious logistical challenges of the past two pandemic years.

Tobin said the first and last shows are carry-overs from the season he had planned for 2020, happily including most of the original cast members, while the two-person middle play The Mountaintop, about Dr. Martin Luther King Jr., replaces an earlier-planned two-person play, Bakersfield Mist. “I loved that first play, but wanted to include something that feels necessary for our time, so that is where the MLK show came from,” he said. “It’s a brilliant and exciting play.”

Another factor for Tobin in planning this season was a need to introduce COVID protocols such as keeping to just 75 percent theater capacity for shows with mandatory masks and proof of vaccination for audiences. “We needed more time and resources to implement COVID protocols, which is one reason we dropped to three shows – it’s time-intensive to add that level of COVD protocols,” he said. Tobin decided to drop a 2020 show that was going to be the most complicated and expensive to produce, Animal Crackers – a show that also caused him some concerns related to its dated social sensibilities and language.

After canceling the 2020 season, he initially had hopes of rolling that full season forward to 2021 – that is until pandemic realities made clear it would not be possible. Several hundred Playhouse subscription package purchasers had agreed to roll forward their subscriptions a year that first time and just keep tickets to use the next season. When the need arose in 2021 to roll forward the season yet again to 202, Tobin said, he was pleased that so many loyal supporters agreed to hang on for 2022, with surprisingly few requesting refunds.

Further frustrations piled up: “As we got past summer 2021 I kept trying to put together small outdoor performance-type things that were just becoming too expensive to mount with staging and outdoor lighting and renting equipment – it was getting too big to be worthwhile, so, one after another we would put plans together and have them not happen,” he said.

Colorful banners outside the McCarthy Arts Center proclaim the opening of the Playhouse season. (photo Will Coppola ’23)

Tobin came to realize that by slowing things down and instituting COVID protocols, however, a 2022 season finally would be possible – a huge relief. Lately he is basking in anticipation of familiar and beloved rhythms he feels outside his McCarthy Arts Center office, even with new COVID precautions and a scaled back season from four shows down to three.

“Starting this weekend we’ll have rehearsals going on, the Box Office is open and people are coming in buying tickets — I hear power tools all day long in the scene shop while downstairs they’re painting props—every corner of the building is bustling, and it’s such a good feeling,” he said. Tobin loves how that once and future familiar rhythm culminates each day during a show’s run after a dinner break with “the audience coming in, doors open, people taking seats, the play happening, and it’s another day done.”

Just as gratifying to Tobin as the patient Playhouse subscription patrons have been the professional Equity actors in the plays originally cast in 2020. “Almost 100 percent same people from 2020 will be back in the ones we carried over,” he said. “In the first show, we lost just one person who found other work, but we easily replaced her with actress who has done tons of shows with us, Amanda Ryan Paige — audiences love her.” They also found a strong replacement for one role in Desperate Measures. Auditions over the last two years have been via audition videos, even though Tobin typically used to go in person to New York to cast shows. He hopes that can resume at some point. Given the Playhouse’s excellent reputation, 100 or more actors generally will audition for a given role, he said.

Some perennial favorites are among this year’s company, including local Bill Carmichael in the first and last shows, Brenda Pitmon, another local favorite who lives in the Champlain Islands; Sarah Carleton who has been “in almost every season since 1986.”

Tobin said Into the Breeches! is set in Providence, RI in 1942, when a Shakespeare company “had to close down since all guys overseas” – but then the directors wife realizes , we can do this without them, so they gather group of women of theater and decided to produce a production of Henry V.” Says Tobin, “It’s so charming and fun and has a real show-must-go –spirit. It’s just a few years old and had started making rounds at regional theaters with great success before pandemic.

He said the MLK play The Mountaintop “takes place in the motel room where MLK was staying when he was assassinated, the evening after his “mountaintop speech.” The civil rights leader is alone in his room at the Lorraine Motel, orders room service that the housekeeper brings him, and their interactions lead to a profound realization.

The last show had a recent off-Broadway run and so is still quite new. “It closed maybe five months before COVID started and I was granted the rights to it right after it closed off Broadway,” he said. “It’s super-fun with a cast of six, very loosely based on Shakespeare’s Measure for Measure. The music is so good. Local pianist Tom Cleary returns to the Playhouse as music director for the show, along with a bass, guitar and mandolin.

In total, the season will feature 15 actors: eight in the first show, two in the second and six in the third. The directors are Catherine Doherty ’81 for the first show, now a theater faculty member from SUNY New Paltz; Karen Gilmer for The Mountaintop – she is a director and costume designer from the Pittsburgh area where she also teaches theatre at the University of Pittsburgh. “She designed costumes here a long time ago and when our paths crossed again, she’d expressed interest in directing in 2020, and as an African American theater artist she was excited to hear we were doing The Mountaintop. Director of the final show is Joseph Hayward, who was associate director of off-Broadway production of Desperate Measures, and the choreographer came from that production, too, “so we have a team of people who know the show inside and out.”

“I want to emphasize to the community how much we love doing what we do,” Tobin said. “It such a joy finally to be able to welcome everybody back into the theater. There’s no business like show business.”

Photo by Will Coppola ’23