Longtime benefactor and former trustee from Class of '76 says caring faculty and great campus life can forge lifelong bonds with Saint Michael's College, today as in his era 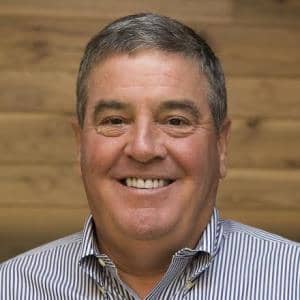 Though life as a Saint Michael’s College student in the 1970s was vastly different from the experiences of students today, alumni of both eras can find meaningful ways to support the College they love, said Don Dion Jr. ’76 — an honors business administration graduate turned highly successful executive who long has been one of the College’s strongest benefactors.

Dion leads by example, most notably his primary role in helping fund the Dion Family Student Center in 2013, and by providing scholarships for students attending Catholic institutions, both Saint Michael’s and the Maine high school he attended, St. Dominic Regional High School in Auburn.

Don,, far left in foreground at head of table, hosts a group of MOVE volunteers at his home in Florida for dinner over the recent winter break.

He further shows his support for Saint Michael’s by hosting annual alumni events in Naples, FL, where he lives much of the year after building his business in western Massachusetts where he also has a home. He also served many years as a Trustee for the College.

Currently, Dion is Chief Executive Officer at Corbel Capital NLP, LLC, as well as the Chief Investment Officer at DRD Investments, LLC, both with headquarters in Williamstown, MA, and Naples, FL.

He was the first in his family to attend college, earning an economics minor along with his business administration degree – but he was not the last Dion to become a Purple Knight: Following him to Saint Michael’s were his sisters, Constance “Connie” Dion Harrington ’78 (sociology degree) and Joline Dion Bell ’81 (biology). Don Dion went on after graduation to receive his law degree from the University of Maine and a master’s in tax law from Boston University.

Dion still has vivid and fond memories of his student days at Saint Michael’s more than four decades ago, fully recognizing how different those times were from campus life today since he has kept close ties to the College as a Trustee and through alumni activities and gift initiatives.

Don in his convertible sports car in this image from his 1976 Saint Michael’s yearbook.

He recalls living in Lyons Hall, presently a residence for first-year students, for three of his four years at the College. “There weren’t that many places to live like you have now,” Dion said. “We didn’t have all those new suites and dorms, and everyone basically had one room, and you shared with someone.” Dion spent his senior year on North Campus (Fort Ethan Allen) in Purtill Hall and the rooms were a little bigger there, he said. These former North Campus residences are no longer Saint Michael’s properties, however, with private residential developers or the University of Vermont buying the buildings in recent years. All current Saint Michael’s students reside now on Main Campus.

During his time on campus, Dion was involved in intramural sports such as soccer and hockey. He said that in the early to mid-70s, “It was mostly men, almost all men… There were a few women transfer students, but it was basically an all-men’s college at the time. I think what’s really different today is that you have more women than men on campus.”

The nearby all-women’s college in the area at the time was Trinity College in Burlington, and Dion recalled Saint Michael’s students socializing a lot with the Trinity women as well as the University of Vermont and Champlain College students. “It was a big college town, you know, Champlain College, UVM, Saint Michael’s, and Trinity. There were always a lot of kids. It was a great, great place to go to school,” he said. Dion remembered that the “P-Day”  tradition, an event still put on by the College, was immensely popular during his time at Saint Michael’s, as was heading down to Church Street in Burlington on Friday nights.

Professor Amrhein in 1976 from the yearbook.

Dion said he knew he wanted to be a business major upon entering college, and after his sophomore year, he declared his major to be business. “Professor Joseph Amrhein taught a lot of the investment courses, and maybe that’s what got me going with investments and business. He’s someone I would talk to once and a while,” he said.

Saint Michael’s is where Dion says he solidified his early interest in business and investing due to the availability and care that the professors put into their courses and serving students during his undergraduate years.

“The faculty was very engaged and very available to the students to help. And you know, if you tried, you weren’t going to fail, because the faculty really wanted you to do okay and graduate in four years,” he said. Dion spoke about also enjoying political science courses that he took as a part of the liberal arts education that Saint Michael’s College provides, and how he valued that it was “pretty easy to graduate with a business and economics degree and still take a lot of other courses.” Saint Michael’s, he said, gave him “a good education that allowed me to go to law school.”

From 2006 to 2020, Dion served on the Saint Michael’s College Board of Trustees. “One day, [former] President [Marc[ vanderHeyden calls me and asked me if he could meet with me in Williamstown, and he came down and asked me if I’d be interested in being on the Board,” he said.

Dion said he valued his time on the Board and “was really involved for 13 years, all the meetings and stuff, and did everything I could to help the school.” His generosity toward the College stems from how much he cherished his time as a student at Saint Michael’s, he said.

“I always got to [Saint Michael’s] early when I was a student — you know, try to get there three, four days early. And a lot of my friends would get there early and stay a day or two later, you know, in May. So, we get there in September early and stay late. People really liked being on campus.”

Don Dion ’76 (suit with red tie, center) with family and friends in front of the Dion Family Student Center.

Dion makes a point to encourage his fellow alumni to contribute what they can to the College, whether it is monetary donations, volunteering, hiring Saint Michael’s students, or just encouraging people to attend the College.

He also encouraged current students to “to spend time with your professors outside of the class. Enjoy the time because it goes by so fast. I think Saint Michael’s was four of the best years of my life. I mean, I really, really had a great time… I wish I would have gone to more speakers and plays, so I would encourage [students] to take advantage of what the school is offering.”