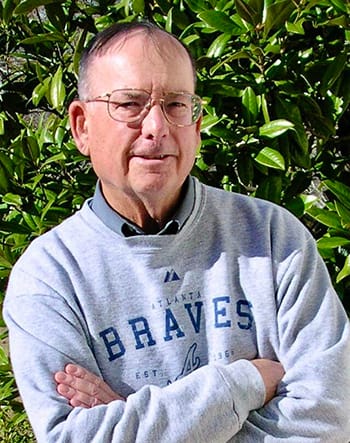 “Dr. Bill Kelly’s tremendous forethought speaks volumes about the type of educator and person that he was,” said Saint Michael’s College President Lorraine Sterritt. “He valued his own formative college experience and went on to teach at one of the finest institutions in the country. This extremely generous gift will make a huge difference on our small campus and carry on his legacy for generations of Purple Knights to come. I only wish we had the chance to thank him in person.”

Kelly completed two years of Air Force ROTC and earned a bachelor’s degree in government from Saint Michael’s, did graduate work at the University of Arizona, received his master’s from New Mexico State, and his doctorate from the University of Nebraska before joining the Political Science Department at Auburn University in the fall of 1973. He remained there until his death.

Colleagues and friends fondly recalled Kelly’s frugality, humility and sensibility. “My freshman year coincided with his first year at Auburn,” said former student, Lee County, Alabama, Sheriff Jay Jones. “Through the years, we became and remained friends. He supported me when I ran for sheriff and invited me to lecture in his criminal justice classes. He was a very private person, not flashy or showy, a ‘straight arrow’ as he liked to say, and a perfect gentleman.”

Professor Kelly was born on December 30, 1941, and died on November 29, 2021, just shy of his 80th birthday. In his youth, Kelly attended Cardinal Mindszenty High School in his hometown of Dunkirk, NY, where he was taught by renowned Edmundite civil rights activist Fr. Maurice Ouellet, S.S.E. ’48. Their connection and lasting friendship led him to Saint Michael’s College. Kelly’s memorial service took place in February at Saint Michael the Archangel parish in Auburn, which, according to Sheriff Jones, “brought everything full circle.”

Auburn Political Science Department chair Professor Paul Harris was himself a former student of Professor Kelly. “He was a stand-out teacher, mentor and scholar,” Harris said. “He truly loved teaching and mentoring thousands of students over his career.” Kelly taught an average of seven classes per year, served as departmental internship coordinator and placed students with opportunities from the Lee County Justice Center to the White House. In 2020, he was inducted into Auburn’s College of Liberal Arts (CLA) Teaching Academy, the highest honor awarded to a member of the CLA faculty.

“He had very little as a child and went out of his way to make sure his students know how to prepare for their future financially,” said Professor Steven Brown, an Auburn colleague. “Every American Government class that he taught and all the internships he supervised had a section where he taught and tested students on topics like IRAs and TIAA accounts. Students loved him for his concern about them and their future.”

This is the Saint Michael’s College 1965 yearbook photo of William Kelly.

Although he spent his entire life after Saint Michael’s in the West, Midwest and South, Kelly never forgot the Northeast, said Brown. “He missed his family up there and he missed the snow. He constantly spoke of Saint Michael’s and wanting to give something back to the school. He was extremely frugal – he shopped at yard sales and flea markets, negotiated rock bottom prices for used cars – he made it clear he was saving all he could to help other people.”

“Professor Kelly effusively expressed his admiration, respect and love for Saint Michael’s,” agreed another Auburn colleague, Professor Clifton Perry. “He frequently expressed his desire to return to his beautiful Vermont upon his retirement. He was a most lovely and unique individual. I benefited greatly from knowing him.”

“He was truly an institution at Auburn,” said Brown. “There have been more ‘successful’ faculty by the discipline’s standards of publishing and the like, but in terms of having a positive impact on young people, I am confident there isn’t a person on campus that comes remotely close to Bill.”

Kelly was also highly regarded by his own college friends and classmates. “Bill was a quiet man of faith who embraced many activities while at Saint Michael’s,” remembered Jim Whitman ’65. “With his generous gift, he has made sure that others can take his path of solid growth, development and service to others. The Class of 1965 is proud to count Bill Kelly as one of our own.”

Classmate Kevin Slane ’65 agreed, saying, “The vision of Saint Michael’s College is Do Well and Do Good. Bill Kelly certainly lived that out each and every day throughout his life and through his legacy.”