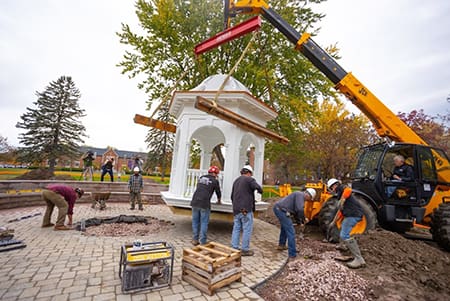 Watch a video by Patrick Bohan of cupola returning to campus>>

The Saint Michael’s College cupola – the most recognizable symbol used to represent the school – returned to campus Tuesday and now sits on a new pedestal at the heart of campus.

Construction on the cupola’s new site began in September and is ongoing. The cupola formerly adorned Founders Hall, the oldest building on campus, for more than a century before the building came down in May 2021. After considerable study, the College had determined that bringing Founders Hall up to modern standards would be too costly, but leaders resolved to save the cupola.

“The cupola holds immense historical and sentimental significance for the Saint Michael’s community,” said College President Lorraine Sterritt. “We are thrilled to be welcoming home this iconic structure to grace our campus once again.”

Since its removal, the cupola has been undergoing restoration at Watershed Construction in Berlin. Restorers replaced the rotted wood while saving about 75 percent of the original wood, painted the wood its original white color, and topped the hexagonal structure with a new copper roof (yet to be re-applied at the new location).

The restored cupola arrives on its side Tuesday morning. (photos by Patrick Bohan)

The attractively restored cupola arrived after its journey from the Berlin restorers very early Tuesday morning on the back of an Oversized Load truck, well secured and resting on its side.

From the main parking lot just across the road from Bergeron Wellness Center over several hours, crews from Demag Riggers and Crane Service expertly and carefully guided the restored iconic piece of College history toward its new destination.

After using a large crane to take it off the flatbed, they righted it and attached it to a smaller piece of equipment that rolled it shortly after noontime, over a mostly paved route between Dion Family Student Center and Alliot Hall, toward its new home. Local media from the three Burlington-area television news affiliates documented the occasion and spoke with Facilities Director Joel Ribout, Education Professor Valerie Bang-Jensen, Student Activities Director Kerri Leach and Edmundite Fr. David Theroux, S.S.E. ’70, about the significance of the cupola’s return.

Without the cross on top – that important iron adornment, now in storage, will return atop the structure in coming weeks — the cupola measures 14 feet high and 11 feet across. The cupola will be the centerpiece of an outdoor gathering space in the heart of Saint Michael’s campus on the main green between Durick Library and the chapel – a more prominent location than where Founders Hall once stood at the large curve of Route 15.

A semi-circle sitting area and berms will surround the cupola in its new location and part of the space will serve as an outdoor classroom. The site will have power with convenience outlets, and it will be in range of campus Wi-Fi. Newly built walkways to the cupola’s new home connect to existing walkways.

— Liz Murray ’13 and Mark Tarnacki contributed to this report.

The cupola comes off Founders Hall in May 2021. (file photo by Jerry Swope)