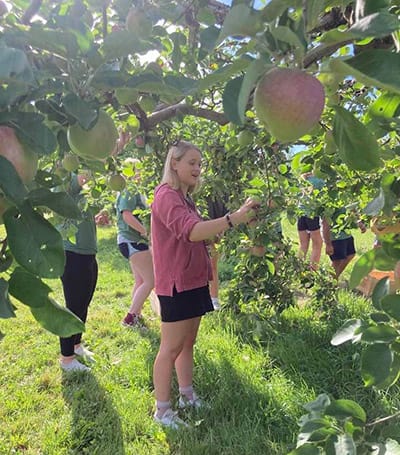 Literally seeing the fruits of their labors motivates new arrivals at Saint Michael’s College each year to sample community service, inspiring many to embrace it longer-term.

The popular annual First Year MOVE Apple Picking outing was this past Saturday, Sept. 3, for first-years and transfers. MOVE stands for Mobilization of Volunteer Efforts and is the service arm of Edmundite Campus Ministry at the College.

Victoria Castillo ’20, assistant director of MOVE, said the organization has been hosting First Year Apple Picking during the first weekend of the school year for about the past 30 years. MOVE staff and student leaders invite new students to go to Chapin Orchard in Essex and pick apples, which go as donations to the Vermont Food Bank or to other local food shelves for the broader community to enjoy.

Carry on — hauling a full crate.

“It is a fantastic annual tradition and has so much value for many different reasons,” Castillo said. “It gives first year students the chance to meet others in their class, make new friends, learn about service work and its impact, get a taste of what it’s like to volunteer with MOVE, and hopefully inspire them to be involved and explore the 19 different programs that MOVE offers.”

This year, student interest and participation astounded the student leaders who coordinated the event. Makayla Lima ’24 and Lauren Best ’24 said the spots filled up within the first two days that the sign-up sheet went up.

Among those participating were 70 first year students, new transfer students, and new international students who signed up for apple picking, and about a dozen upperclass students who assisted with the event and led meaningful reflections for the group following the service work. Altogether, students picked 40 bushels of apples — approximately 5,000 apples.

“Overall, First Year Apple Picking was a huge success, and it was refreshing to see so much energy and excitement from the first-year class in how much they want to be connected and involved,” said Castillo. “We hope to see them in the MOVE office often throughout the semester!”