Ken O'Connell accompanies three students to annual national gathering of Student Veterans of America alongside 2,000 others from around nation 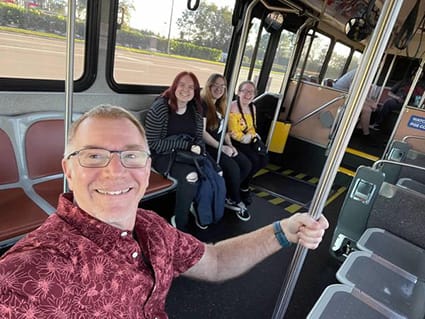 Ken O’Connell, foreground left, out and about with Saint Michael’s SVA students at the conference in Florida.

“Thanks to the Maloney and Harrington military support funds, they were able to meet prospective employers, attend several presentations, and network within the wonderful SVA community,” O’Connell said.

He explained that one of the best ways to support student veterans at Saint Michael’s is to make a gift to the Lt. Colonel Joseph P. Maloney, Jr. Military Community Fund. This fund assists students who are active duty United States military, veteran students, dependents of veterans or students admitted to and participating in the United States Reserve Officers’ Training Corp.

The Bavely siblings, Marie and Mickey, who are from Connecticut, are the children of a Navy veteran, so that is their official connection to his office and the fund, O’Connell said, while Mosher is active in the Vermont Air National Guard. However, beyond such direct military connections, O’Connell stressed that he is “glad to meet with and help any student at Saint Michael’s who ask or stop in our office on the first floor of Joyce Hall, in any way I can.”

Registration at the start of the conference.

O’Connell said the St. Mike’s conference cohort flew down to Orlando for this nearly weeklong event that attracted about 2,000 participants. “The days are pretty long since the sessions ran from breakfast until 6 p.m. or 7 p.m. each evening,” he said. “Topics ranged from student-veteran transition to using VA benefits efficiently, several workshops on Diversity, Equity and Inclusion (DEI) and being a welcoming community in campus SVA clubs.”

“Another major benefit was professional networking and meeting employers from companies such as Raytheon, The U.S. Department of State, Boeing, Bristol Myers Squib, and Northrop Grumman, who were available for resume building, granting internships and employment on the spot at the conference,” O’Connell said.

All of the Saint Michael’s group agreed that a top highlight was military style ball on the final day – “a dance celebration and fancy gala” — that all attended. “We got a little dressed up for that, and then the next day we all went to Animal Kingdom at Disney World,” O’Connell said.

Past SVA national conventions (pre-pandemic) that O’Connell attended with Saint Michael’s students included in Los Angeles and San Antonio. “When we were in San Antonio we went to Alamo, so it’s not all business,” he said. “That year, in 2019, our group included a Marine veteran, Air Force ROTC member and National Guard member.”

All dressed and someplace to go — a Military Ball.

Marie Bavely, a senior criminology major, is the SVA Chapter president at St. Mike’s for 2022-2023. “As president I try to create and promote events for the campus and the greater community,” she said. Marie said the conference experience was “absolutely amazing.”

“The different sessions were interesting and gave me several ideas for the club moving forward,” she said. “There was a major focus on inclusivity and I very much appreciated that.” Bavely that she enjoyed talking to a few recruiters about possible job opportunities, and hopes to create future contacts for the club.

Marie Bavely said she appreciates the supportive Saint Michael’s community, extending to the several welcoming alumni with whom she has connected as a student. “I cannot wait to get in contact with more of them,” she said. After her May graduation, she plans to move to Washington, D.C. and work in the nonprofit or government sectors, ideally in criminal justice reform. “The Military Community Services Office has provided me a place to grow as a leader and get involved with the community,” she said.

Demara Mosher is a computer science major with a mathematics minor from West Charleston, VT. Outside class, she is primarily involved with Saint Michael’s Fire and Rescue. “I volunteer my time to Rescue, putting in hours between my classes and on weekends, and have been part of Rescue since my first year in 2019,” said Mosher. She also commits one weekend per month during the school year to the Vermont Air National Guard as a traditional guardsman.

Time to have fun — Ken O’Connell with some Disney characters in Florida.

“My conference experience was a good way for me to get an idea of where to go after graduation,” she said. “It gave me both insight into benefits as a student veteran and an idea of how to get out into the workforce post-college.” She said she appreciates the smaller campus and class sizes at Saint Michael’s. “It’s easy to run into people you will know nearly every day when walking to class or anywhere on campus,” she said. Mosher hopes to find a job in the tech industry after graduation. “I hope to use my computer science degree possibly to become a software engineer,” she said. The Military Community Services Office has helped her with GI bill benefits, a leave of absence for basic training, and figuring out transitions, she said.

Mickey Bavely, the sibling of Marie and an English major, is active in the Chemistry Club along with the campus SVA chapter. Mickey attended a handful of conference presentations about transgender and LGBTQ+ veteran supports, and about “becoming a better leader for your chapter, and learning how to market your skills.” They find the St. Mike’s campus community warm, supportive, uplifting and “sweet,” and is making lasting friendships. “As a first-year student I’m not entirely sure what I plan to pursue after I graduate,” they said. “As of now I would like to be an editor with a remote job in order to travel,” though a faster-paced environment such as public relations or international relations also appeals.

O’Connell said that a gift to the Maloney Fund will provide assistance accessing professional development to help with job and career advancement. Thank you to the donors of the Maloney Fund and to Lt. Col. Ret. Brian P. Harrington ’77 for making this all possible!” he said.

A military band played during major gatherings of attendees by the hundreds at the Orlando conference.