Cailey McDermott ’09 does not back down from a challenge, and her Saint Michael’s College journalism and liberal arts education has prepared her well to meet several of them. 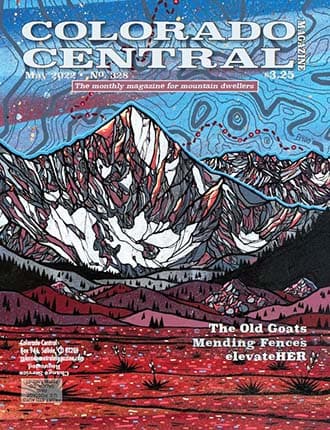 Colorado Central magazine is the latest project for versatile alumna journalist Cailey McDermott ’09. Here’s the cover from the latest edition.

McDermott lives today in Salida, CO, with her husband and young daughter, working as a photographer as well as running the regional art, history and culture magazine Colorado Central, after several starts and stops in a variety of journalism and photography jobs.

A Vermont native, McDermott graduated with a degree in journalism and concentration in photography from Saint Michael’s College, and she says the experience seems to have served her well.

College Factual, a website that compares programs and values for prospective students, ranks the Saint Michael’s degree now known as the Media Studies, Journalism, and Digital Arts (MJD) major as number one in the New England region for “Best Communications & Media Studies Bachelor’s Degree Schools” for 2022.

Saint Michael’s was McDermott’s father’s alma mater (Dennis McDermott ’74), and because of that, McDermott originally was not interested in the College. “He was a proud alumnus, and most of his friends I knew when I was younger also went to Saint Mike’s… and so because of that, I never considered it for myself. I didn’t want to go where everyone went,” she said. Despite McDermott’s original resistance to the College, she applied, partially to “prove to her dad that she could get in.” When she was accepted, she figured she would take a tour of the campus, and found that she “absolutely loved it.”

Her time at Saint Michael’s holds abundant special memories. Despite not having a lot of free time due to the demanding aspects of the journalism degree, McDermott still found time to participate in the Student Global AIDS Campaign run by Professor Trish Siplon of the Political Science Department and to study abroad for a semester. She also worked at North Campus Cafe and played rugby a semester. McDermott went to Wellington, New Zealand – she jokes that she thought she should “go as far away as possible” since she went to school not that far from home.

An avid traveler both before and since her Saint Michael’s studies abroad, McDermott split her time between the United States and visiting family friends in Ireland for the better part of her college and post-college life. After her semester abroad in New Zealand, she was not finished traveling. One of her favorite memories from her time at Saint Michael’s happened after her graduation. She went to Tanzania with Journalism Professors Jerry Swope, Trish Siplon and another Brianna Myers ’09 and made a documentary for an AIDS orphanage.

Post-graduation, her motivation for leaving New England behind and moving to Colorado had several factors. “It was a really terrible time to try to get employed, especially in Vermont,” due to the recent recession, McDermott said..However, one of her best friends from childhood had moved to Colorado, so McDermott made plans visit. “I just moved here, sight unseen, in October 2010… I was just planning to go and be a ski bum for the winter and see what it was like. And then I got a job at the Mountain Mail newspaper here in town, and they wanted a two-year commitment.”

She ended up working there for three years, and it was taxing work. Due to the amount of turnover at the newspaper, she was the most senior reporter after six months. Poor pay and overworking pushed her to start her photography business toward the end of the three years she spent at the Mountain Mail. “It was quickly apparent, especially during the weekend, that I couldn’t do the weekend report and my wedding photography,on the weekend… so eventually, I quit the newspaper because it was also mentally exhausting.”

Her interest in magazines began in 2016. “Some guys I knew in town decided they wanted to start a new magazine, like an arts and culture magazine, and they brought me on. It was really exciting… In that job, I did everything. I was like the public relations and community outreach. I hired people and fired people and trained people and sold ads and made ads and wrote stories and pitched content. I did a lot of things that I hadn’t ever done before.”

Unfortunately, the startup magazine failed, but McDermott found that she missed that work. Wedding photography (main focus of her business Phreckles Photography that she has owned 12 years) specifically did not bring her the joy that she wanted from her job, especially during the pandemic when everyone was re-evaluating their lives and careers. “The wedding industry is very fake,” she said, “The opposite of journalism. You know, I’m not fake, and sometimes honest to a fault. So this was maybe not the right [career] for me.”

The previous owner of the Colorado Central Magazine began advertising the sale of the magazine, but McDermott was not in a place to purchase a magazine at the start of a pandemic with a daughter who was less than a year old. Fortunately for McDermott, that previous owner had not sold the magazine by this time last year, and McDermott was in a place to be able to purchase the magazine. She did not retire her photography business, but is now capable of rejecting requests for wedding photography.

McDermott characterizes Colorado Central Magazine as a regional magazine “focused on this area of Colorado, central Colorado” with a unique amalgamation of local “art, history, and culture.” It is a subscription-based monthly in print since 1994 and McDermott is the third owner. “I’ve been using the magazine to give a platform to new voices — young writers, budding writers, female writers, members of the LGBTQIA2+ community and others,” she said.

Despite the magazine not having a huge base and her having effectively to take a pay cut in order to run it, she remains passionate about the future of the magazine and her goals for it, the feisty-by-nature McDermott feels ready for the challenge. “My goal has always been to ruffle some feathers…. There’s been a lot of topics that I’ve talked about in my editorials that have gotten some heat and probably gotten some subscribers not to renew. I have this platform, and I’m going to use it.”