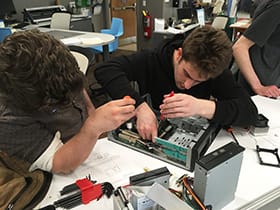 The header photo shows students from the 3+2 program during testing in a bridge-design project; directly above, students reverse-engineering discarded electronics from the Information Technology office; descending, a monster truck redesign project; electrical circuit design in the MakerSpace; and a student with her poster at Senior Design night. (photos courtesy of engineering faculty)

Today’s higher education landscape sees more and more students looking to minimize their time spent in college. For many, knocking off a semester or even a full year can be the path to career readiness with less time spent paying tuition and more time spent out in the field. But less isn’t always more. Engineering students find adding a fifth year to be a worthy investment in the 3+2 dual degree program with Saint Michael’s College and the University of Vermont.

Approximately 15 students are slated to enter the program at Saint Michael’s this fall, up from half a dozen last year. While Saint Michael’s also offers a 3+2 program with Clarkson University in New York, the UVM program is the more popular choice. 3+2 students earn two bachelor’s degrees in five years: a BA from Saint Michael’s and a BS from UVM. They spend their first three years at St. Mike’s taking liberal arts, mathematics, and introductory science courses, as well as commuting for some courses at UVM. Then they transfer to UVM full time for their last two years. The requirements for a math minor at Saint Mike’s are also fulfilled through the Engineering curriculum.

Dual degree programs are a popular option with many colleges and universities and can be particularly beneficial for engineering students. Engineering tracks are highly intensive to the point where taking extra liberal arts courses isn’t really an option for students in most four-year programs. But the benefits of a more inclusive education are widely recognized. Parents coming from the engineering field themselves tend to agree that the advantage is an important one, wishing to see their sons and daughters emerge from college as well-rounded individuals ready to compete with their peers.

Crucially, the Saint Michael’s curriculum emphasizes writing skills that give students a leg up in the job market, as well as in graduate studies if they decide to pursue an advanced degree. 3+2 engineering students can anticipate better resumes and interviews, better research proposals, and better communication in the workplace. “Our students just present themselves better,” said Lloyd Simons, co-director of the program.

He sat down with co-director Zsuzsanna Kadas and program coordinator Barbara O’Donovan in Jeanmarie Hall to discuss the program. All three easily talked by name about not only current students, but some who graduated over a decade ago, as well as their projects, goals, and successes in the field. Caleb Mann, a varsity soccer player, designed an adaptive prosthetic foot to fit a snowboard boot. Varsity hockey players Tully LaBelle-Hamer and Dave Vorozilchak designed an automatic puck thrower for training. Susan Molzon managed to study abroad for a semester during her five-year track and now works for the city of Burlington as a public works engineer. Such thorough offhand knowledge by faculty about their students, going back so many years, would be less common at larger institution where it’s much easier to get lost among the numbers.

Professor O’Donovan, who previously taught engineering at two other colleges, started out as an adjunct professor at Saint Michael’s in 2002. Recently, she started teaching introductory engineering courses in addition to her more foundational mathematics courses that she has taught since 2016 at the College as full-time faculty. “The first [engineering] course I taught here was a statics course last fall (“statics” is a topic in engineering, not to be confused with statistics), and I think it was at the end of our first class, the students stayed after class to say, ‘we are so glad this class is being offered here.’” The professor, who has an engineering master’s and worked in the field several years before realizing her true passion was teaching, says that her students appreciate not only avoiding a commute to UVM for a three-day course, but the smaller class size and the chance to “build community” with other 3+2 students. A smaller class also gives O’Donovan the chance to let her students explore their own unique interests. “I look at the engineering fields they’re interested in and try to find activities that will give them experiences in that engineering field.”

These intro-level classes like Statics and Introduction to Engineering typically would be the largest for an Engineering major at the University of Vermont, with small class sizes being reserved for the later, upper-level courses that students take in their senior year. Starting out at St. Mike’s with 3+2 gives students a chance to experience small classroom environments throughout their education. And when it comes to small class sizes and one-on-one faculty attention, Saint Michael’s is tough to beat. Kadas is confident in the support that she and her colleagues provide. “I think that’s one of the benefits: that we do try really hard to support them in any way we can. We spend a lot of time with the students, advising them, and… trying to plan out how it’s going to work for them.” The small-campus feel of Saint Michael’s isn’t just an ethos. It’s a powerful academic advantage.

But that tight-knit campus community isn’t restrictive, either. Students in the Engineering program get the opportunity to keep eggs in each basket, benefiting from enrollment at both St. Mike’s and the University of Vermont. As UVM students, they have access to the resources provided by such a large institution, as well as the ability to join clubs on campus. 3+2 students are eligible to play varsity sports at St. Mike’s for four years, and to live on campus for all five if they so choose. They’re able to network at both colleges, giving them a major leg up in terms of finding jobs and internships. Sports are a particular benefit, Simons notes. Division 1 athletics at large universities such as UVM are typically too rigorous to co-exist with the engineering track, unlike Division II athletics at Saint Mike’s. “We’ve had years where we’ve had four varsity hockey players who are in the engineering program. And that’s unusual. That’s a definite perk.”

The subset of students enrolled at both Saint Michael’s and UVM grants a sense of community in and of itself. “Once they get to their fourth or fifth year, they know who their peers are at St. Mike’s that are taking courses at UVM,” says Kadas. “So they sort of cluster together and work together, take classes together over at UVM and study together at St. Mike’s for their classes.”

Students and faculty associated with the program are true believers with this core message: 3+2 engineering students at Saint Michael’s can truly have it all. The benefits of a small, residential, liberal arts campus and those of a large state university are rolled into an ideal package for producing a well-rounded student. If students wish to pursue a higher degree, their 3+2 credentials give them a better shot at getting into graduate school, or of finding an employer who can finance that education, which is a common practice in the engineering field.

Scott Hamshaw, who graduated from the program in 2006, is currently a post-doctoral researcher in environmental engineering and data science at the University of Vermont studying the resilience of Lake Champlain’s basin to extreme events.

He feels that the variety of skills he gained in his liberal studies courses at Saint Michael’s set him on the right track for his career, preparing him for interdisciplinary projects such as the one with which he’s currently involved. “I see the broad background of knowledge I gained beyond the engineering discipline as an advantage over what I would have gained from a typical 4-year engineering program,” he writes in a statement about his experience with the program. “The 3+2 engineering program at SMC is also great for students who value a small class environment, as you are able to complete the humanities, basic science and mathematics at SMC with amazing faculty and smaller class sizes and then continue with the more focused engineering curriculum at UVM or Clarkson that consists of mostly smaller, upper-level courses.”

The opportunity to take writing-intensive courses benefits not only new alumni looking to find their first job or enter graduate school, but also post-graduate professionals like Hamshaw, who says his communication skills have helped him gain competitive fellowships and grants. “The focus on writing skills I had at St. Mike’s, including the writing-intensive first year seminar, have contributed to my effectiveness in communicating both my career and research goals,” he says.