Cultural exposure can serve as an immersive, enriching experience, and for many students at Saint Michael’s College, the International Festival was an opportunity to celebrate the richness of cultures that exist within the student body and surrounding community.

The Five Town All Stars, an African drumming group based in Vermont, performed at the International Festival at Saint Michael’s College.

The International Festival is a yearly celebration of different cultures through food, music, and dance performances, sponsored by the Diversity Coalition (DC). This year, the event was held on November 16th in the Tarrant Gym from 5 to 9:30 p.m. The two co-presidents and spearheads of DC, Marlon Hyde ‘21 and Connor Vezina ‘22, began the planning process months in advance. They emphasized that in order for the event to run accordingly, a team effort from the coalition and the surrounding community is vital. The strong community effort has once again contributed to the International Festival’s overall success and positive turnout.

In addition to members of the Diversity Coalition, the team consisted of members of the Martin Luther King Jr. Society, Girl Talk, and students who eagerly volunteered to involve themselves in the preparation and execution of this event.

The International Festival started with an energizing introduction from Diego Calderon ‘21, the MC of the event, along with the spearheads Diversity Coalition. Hyde and Vezina thanked the crowd for their never-ending support and eagerness to celebrate culture together as a community.

Proceeding the introduction was an opening performance from Five Town All Stars, an African drumming group based in Vermont. The group’s performance consisted of dancing, chanting, and synchronized drumming to energize the crowd for the night’s festivities. The engaged audience watched in awe as Five Town All Stars walked through the crowd during their first performance with synchronicity and high energy. After their performance, everyone happily gathered to enjoy the feast. The array of food tables encompassed over three-quarters of the Tarrant gym, and the plethora of food satisfied the large turnout of attendees. 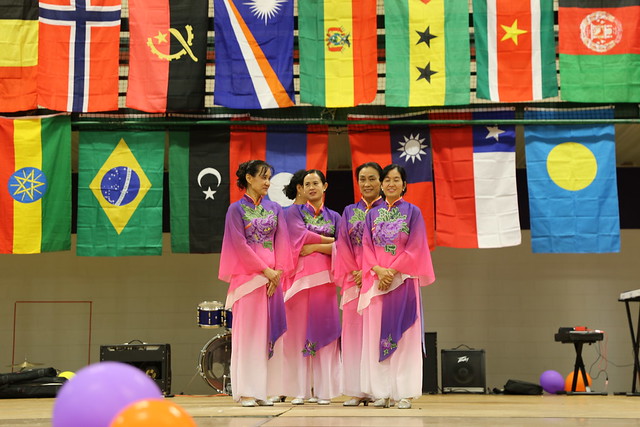 Over 50 people had volunteered to cook and bake different dishes from their respective countries. Some foods included: vegetable curry, coconut bread, Caribbean macaroni, arroz con gandules (rice and beans), stuffed shells, baked ziti, lo mein, egg rolls, and many more. Students cooked in the kitchens of Cashman Hall, Pontigny Hall, and townhouses. As one would enter the respective areas, aromas of spices, stews, and sauces would encompass the space.

After the meal, the co-presidents of DC took the stage for a special announcement. Kimoi Seale, Coordinator of Multicultural & International Programs and Educational Initiatives, received recognition for his work in facilitating multicultural activities and events in the College. He was presented with a plaque and much applause from the community. As he walked off the stage, Seale was greeted by many people congratulating him for his achievement and thanking him for his work.

The event continued with performances from the College’s student-run K-Pop Dance group, who prepared their routines months in advance. The crowd cheered for their classmates and peers as the dance group exuded confidence and joy throughout the entirety of their performances. As the group left the stage, members were greeted by their peers with bouquets of flowers to congratulate them for their hard work and performance quality.

Continuing the variety of performances were ThreeLands and the Vermont Chinese School of Dance. ThreeLands, a reggae band from the Berklee College of Music, based in Boston, Massachusetts, performed original crowd pleasers to further excite the audience. Following this was a traditional Chinese dance performance by the VT Chinese School of Dance. The crowd engaged immediately as the beautiful clothing worn by the dancers and impeccable synchronicity of each routine took the stage and comprised of a beautiful overall performance.

Finally, a dance group from Tamagawa University, located in Tokyo, Japan, performed two routines. The first performance, danced by an all-female group, was loved by the crowd for its tastefulness and high energy. The second performance, performed by an all-male group, was performed with various colored lights in the darkened gym. The audience was highly entertained and enjoyed every second of the routine as the multicolored lights filled the stage.

As the night came to a close, much gratitude was expressed by the Diversity Coalition for everyone’s support and attendance. The group stated, “We are so happy and grateful to have you all present at our International Festival. We hope that you enjoyed the food and performances from various countries and cultures. A special thanks to all the volunteers who helped us bring together this amazing event. Thank you all for coming and enjoy the evening!”

"A special thanks to all the volunteers who helped us bring together this amazing event."