After a year hiatus, holiday custom returns to Alliot lobby on Christmas-dinner day as community members decorate several smaller houses and savor being together again 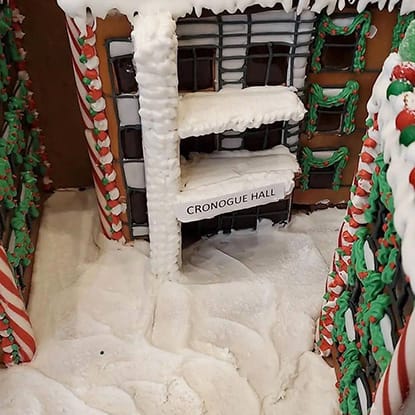 The gingerbread replica of Cronogue Hall pays attention to the smallest details including the name on the building entrance. See wider views at bottom of this story.

Two meaningful memorials to the beloved late Fr. Mike Cronogue of the resident campus Edmundite community merged in a magical-feeling way for this Christmas season.

You see, Fr. Mike loved building gingerbread houses, and for years had made that a holiday tradition with friends both on and off campus. Then, this summer, a major gift from the Edmundites led to the naming of a campus residence hall after Cronogue this past summer.

All this gave Brian Roper of Sodexo food service on campus an inspired idea when holiday planning season with other campus offices rolled around in recent weeks: Roper reached out to a skilled Vermont baker friend, Joe Russo based at Vermont Technical College, who devoted 107 hours to replicating the Cronogue Hall building to scale – from gingerbread, candy and icing!

It arrived this week, and the amazing and impressive creation now sits near the entrance of the dining room in Alliot Hall to encourage proper admiration. It served as great inspiration to perhaps 30 community members, many of them students, who participated in the annual gingerbread-house-decorating festivities in the Alliot lobby late Wednesday afternoon, December 8, in memory of Fr. Mike.

As with so many things, the popular activity in Alliot had a hiatus last year because of the pandemic. Even so, the director of the MOVE community service arm of Edmundite Campus Ministry, Lara Scott, said she kept tradition alive as best she could in 2020 by distributing gingerbread house kits to students isolated in their residences last year so they could decorate and submit photos. Alumni eventually also joined in, submitting photos of their creations, and President Lorraine Sterritt selected the winners.

“It was lovely to be back together as a community again this year,” said Scott. “We did it the same night as Sodexo’s special Christmas dinners with turkey, ham, yule logs and egg nog, so we had a lot of students walking by and stopping to chat because of the decorating, even if they did not participate, so it was a great way to reconnect.” She and the team obtained six gingerbread starter kits from The Essex this year, and anybody could stop and help decorate any of them for the activity that ran for about two hours starting at 4 p.m. The decorated gingerbread houses will sit on the mantel above the Alliot fireplace for the holidays (see image behind headline of this story).

“Since we’ve been doing this in four winter since Fr. Mike’s death, it was nice just to be in person again with people who knew him and cared about him, or even those who maybe didn’t know him but, like him, care about community and togetherness and all the things Fr. Mike supported,” Scott said. “People did great job decorating and it seemed people had a lot of fun.”

The activity, as in past years, was a partnership among the MOVE, Admission, Institutional Advancement offices and Sodexo, with planning going back to late September. She said originators of the activity, Fr. Mike’s close friends Jennie Cernosia, Sue Kuntz and Dave Landers (all retired faculty/staff), stopped by in the morning to see the replica and celebrate the day. She also thanked Jacob Pelletier and Linda Donohue of IA, Angie Armour of the alumni office and Robin Rhodes Astor of Admissions, for contributing.

“Jacob was very active in MOVE while a St Mike’s student and he knew Fr. Mike, so it was great to have him now involved as a staff member,” Scott said.

Pelletier said the Cronogue Hall replica “is technically a permanent structure, and we have plans to preserve and house it somewhere that are still being finalized – one thought is that maybe we can put it in Cronogue Hall.”

A poster on display at the gingerbread event showed memories from early editions of this custom, including several shots with Fr. Mike doing decoration with his old friends.

Pelletier also helped celebrate the house-decorating on social media channels including a short video of the Cronogue Hall replica unveiling. Now that the Alliot gingerbread-decorating event has happened, the College’s Alumni Engagement Office is inviting alumni, parents and family to submit photos by Dec. 15 of gingerbread houses they create at home. Judging for the “Fr. Mike Cronogue Gingerbread Contest” will be by the Alumni Board of Directors who will select winner of a $50 gift card to campus store. Photos of the submissions also will be viewable on social media. Submit photos of completed houses to: events@smcvt.ed​u by December 15.

Notes Pelletier in his post, “Remember, Fr. Mike loved to go over the top with candy, so don’t hold back! No need to bake this yourself, any gingerbread kit will do the trick.”

Gingerbread Cronogue Hall in all its glory on display in Alliot Hall this week.