Senior and president of the Feminists for Equality club, Megan Schneider ‘22, gives back by planning a Giving Tree Fundraiser. 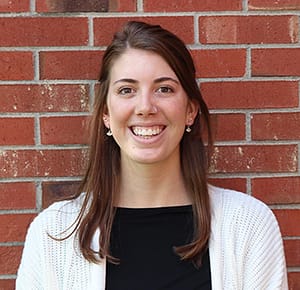 In her role as president of the campus Feminists for Equality club, Saint Michael’s College senior Megan Schneider has been reaching out this semester to a Burlington-area organization that assists victims of domestic violence, exploring meaningful ways for the club to help.

Steps to End Domestic Violence — formerly known as Women Helping Battered Women, — provides domestic violence services and support in Chittenden County, Vermont. “Laura Valastro, one of the Education and Prevention Advocates at Steps, has been talking with me about ways our club could help them, perhaps by obtaining resources from people on campus to provide for them,” said Schneider, a media studies, journalism and digital arts major from Wells, ME.

As a solution, Schneider suggested a “Giving Tree” fundraiser. Here’s how it works: St. Mike’s community members can take a paper ornament off of the tree in Alliot that Schneider and club members set up and decorated. Each ornament has written on it the name of an item that can be donated, based on needs identified by Steps.

St. Mike’s community members who choose to participate then go out and find the items listed on the ornament they took. On Friday, December 10, Schneider said, she will bring all the items that people donated to the shelter. They range from cough drops, Q-tips, and shampoo and conditioner, to gloves, sheets, boots, and vacuums. “Other things included laundry baskets, laundry detergent, toothpaste, deodorant, bath towels, shower curtains, pots and pans, silverware, and many other toiletries and household items,” she said.

Club members tabling in Alliot with the Giving Tree in early December. (photo by Lauren Read)

The idea of the Giving Tree Fundraiser is not new to Schneider. “We decided to bring back the Giving Tree this season, sponsored by Feminists for Equality along with the Center for Women and Gender. When my sister, Kayla Schneider, was here three years ago, she held a Giving Tree as president of the Feminist Club to donate items to Steps to End Domestic Violence. I wanted to do the same,” she said.

“We thought bringing back the Giving Tree would be a great way to get the community involved and for us to help contribute to the shelter,” she said. “We have plans to continue to work with them in the future and create a professional relationship between our SMC Feminist Club and Steps.”

Schneider described the many vital services that the shelter provides for those affected by domestic violence in the state of Vermont. “With about 205 domestic violence-related cases handled by the Vermont State Police this year so far, it is an issue we should all be aware of and we as the Feminist Club want to continue to find ways to help those affected. One of the ways we have found is to work closely with Steps,” said Schneider.

The Feminist Club and the Center for Women and Gender expressed their gratitude towards the SMC community for their positive response and number of items that have already been donated. “We thank everyone who has participated, and it feels great to get the community involved to give to a great cause!”

If someone is looking to donate to Steps on their own, click on the Get Involved tab on the Steps website. Select Ways to Give on the drop-down menu, and the shelter provides information on how an individual can donate either through money or items. https://www.stepsvt.org/ways-to-give