Feeling the waters for a career for the library sciences in her possible post-graduate plans, senior Mara Brooks, from Chester, NH believes LGBTQ+ representation matters everywhere. However, specifically, she believes working in a public library environment is particularly useful information that could create a safe space for queer* youths. [See explanatory note on use of term at end of profile]. With interests in queer literature and queer theory, Brooks said, starting her summer research on American poet Mary Oliver provides “a good first step in building my own personal library.” Her mentor and professor in the English and Humanities department, Christina Root, agrees with Brooks’ long-term vision, saying to her student during a recent interview, “I like that one goal of this research is to make yourself (Brooks) a positive resource for the youths in your future – having an openness within the larger vision so that when someone comes your way, you’ll have more of a chance of making an impact.”

However, Brooks’ research is not confined to the ideas of gender and queer theory. “I am reading Mary Oliver’s poetry– I am trying to develop more of a queer lens from reading her poetry. She’s a lesbian but she is hugely considered as an environmental and spiritual poet,” said Brooks.

Oliver’s work is inspired by nature, rather than the human world. Brooks explains further: “Her various identities show up throughout her poetry in a very subtle, but interesting and organic way. She’s willing to embrace her spiritual identity, alongside her queerness, by imagining the different ways in which God can show up; it’s not just a man in human form. She’s willing to imagine God in ways other than the anthropomorphized man, which in the United States, is very common.” The poet is inclined to lean into and look outside the normal boundaries and finds herself being comfortable with not having concrete answers. Christina Root and a friend (from English Department newsletter)

Professor Root said that from her perspective, “The idea of queer and God just seems like such a powerful topic, and in Mary Oliver, it seems very fresh and important for her, trying to overcome the boundaries that she finds within; Oliver does not do so by specifically discussing her own gender identity or her ideas of environmentalism. It comes out of the encounters she experiences in nature with other beings and ends up turning into something sacred.”

Brooks’ wheels started turning when she read Mary Oliver in an English class called Animal Studies with English Professor Nat Lewis. “This all introduced me to posthumous philosophy — which is really just looking at these binaries of human, nonhuman and identifying the ways in which they overlap,” said Brooks. “In high school I took a lot of science classes and I had been introduced to this way of looking at the world that tends to value exactness, which consequently reduces our experiences or reduces the way we think. This idea of exactness or concrete meaning carried over in the way I was taught about reading and writing poetry.”

So, how does Mary Oliver and environmentalism poetry parallel Brooks’ interest in queer theory? To start, “the gender reckonings we’re having in the United States right now is giving society a larger opportunity to think outside of the binaries we have built around ourselves and each other,” said Brooks. Like Oliver’s ability to step outside of the box spiritually and environmentally, gender identity and queer theory are not subjects that have concrete answers.

“Queer theory is still relatively a new field. It only recently really blossomed, but really made headway in the 1980s so there is still a lot we are learning and a lot to be learned and explore. I just strongly believe representation is important,” said Brooks.

By choosing to research this topic, Brooks is able to open herself up to new ways of thinking about poetry and spirituality. “I went to Sunday school every Sunday, I was raised Catholic, and it was never something that clicked with me. However, with Mary Oliver’s writings, [spirituality] is a difficult topic to avoid. It is so present; she is really outspoken about her spirituality and what she concretely believes in.”

Brooks explained further: “These experiences [Mary Oliver] has, going out every day and looking at a plant or animal or whatever she chooses to focus on —  it’s as if the sacredness bubbles up from within that, rather than her saying like ‘God works in mysterious ways’ or anything like that. The queering within her is an important aspect of the poetry and it’s a nice way to look at her because she is trying to expand many different categories within her writings.”

In the end, Brooks knows that the end-product of her research will technically be just an academic article of some sort. However, in the grand scheme of things she wants to gain a more open way of examining poetry because, she said, “poetry can be really intimidating.”

“My goal with reading Mary Oliver and talking about her this summer is to open up new ways of studying nature, poetry, spirituality, and gender; how they could intertwine, and emphasizing the idea of stepping outside of themselves, or their binaries, and find a meaning of their own.”

*[According to a 2019 Des Moines Register article on the topic, acceptance and how the word “queer” is used has evolved over the decades. The term is now embraced by many (but not all) in the LGBTQ community, according to the media monitoring organization GLAAD. GLAAD’s current media reference guide defines queer as “an adjective used by some people, particularly younger people, whose sexual orientation is not exclusively heterosexual (e.g. queer person, queer woman). Typically, for those who identify as queer, the terms lesbian, gay, and bisexual are perceived to be too limiting and/or fraught with cultural connotations they may feel don’t apply to them. Some people may use queer, or more commonly genderqueer, to describe their gender identity and/or gender expression. Meaning, some people embrace the term, others do not. Brooks chooses to use the term for her work in her summer research that is described in this report.]

Widely known for Paradise Lost, arguably one of the greatest English epic poems, John Milton is a prominent historical figure of many titles. Poet, author, statesman, and politician he is one of the “most significant English authors, after William Shakespeare,” said rising senior, James Downs ’22 from Winchester, MA. 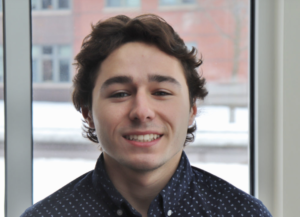 Working with the Professor Kerry Shea of the Saint Michael’s English Department, Downs is taking an in-depth look at the multi-faceted workings of the 17th century poet. Milton is widely known for being a poet — “however, there are many bodies of work that include religious writings, prose work, and political writings,” said Down. “When compared to Paradise Lost, his other works can be categorized as understudied, because it is just so well known.”

Downs’ research will mainly focus on Milton’s political poetry, prose, and religious work. Questions like “how did his religious work impact his political work, how does his political work impact his poetry and vice versa,” will allow a glimpse into today’s society, Downs hopes. Due to today’s socio-political and socio-religious tension in our country, “maybe we can understand today perhaps by looking back to the 17th century,” he said.

“I major in history, English and religious studies, so I love comparing the past to our present and future,” said Downs. “There is something more to be uncovered in Milton’s work from the time of the English civil war [and the country’s transition from a monarchy to the Commonwealth of England].”

Downs’ hope was to study Milton’s work chronologically, focusing on the question of how the author’s views changed over the course of his life. However, soon after diving into his research, Downs found that at various points of Milton’s life, he wrote about different views in his religious work. “He wrote about different stuff on religion at various points of his life, so it’s almost unfair to study chronologically,” he said. So, in his first few weeks of his research, Downs has thematically dealt with some of Milton’s writings.

English Professor Kerry Shea, at right in this photo, listens to science student Emily Webster present during a recent breakfast on campus for student researchers and mentors. (photo by Laura Hardin ’22)

A class on British literature with Professor Shea was Downs’ first introduction to Milton.

“Milton always comes up because he is so influential,” said Downs. This research opportunity gives him the chance to find out more about Milton: about his other writings, his life, and upbringing. “For me this is the perfect opportunity to do a case study of a man and author I am very interested in,” he added.

So, what does Downs want the average reader to know?

“As a self-identified Puritan, Milton was anti-Catholic and against the Church of England,” he said. “He was an outcast in that regard, so his religious writings are not super well-known.” Downs hopes to give this part of Milton’s work its own voice and merit. “This week I am doing his political tracts on divorce; the most interesting thing I have found that he can be quite contradictory at times.”

Downs went on to explain how Milton rejects the Old Testament and is New Testament centered – that is, Milton believes in Jesus Christ fulfilling the Old Testament law and states that our society cannot be based off of the Old Testament. “However, in his doctrine on discipline and divorce, Milton cites the Old Testament as to why divorce should be legal within the Church of England,” said Downs. “That contradiction is really interesting, and this lends itself to his radical views on Christianity. Even though he defines himself as a Puritan, he doesn’t exactly fit into that definition. In many places he states that the Bible is the law, but in other writings he will reject it; that was not something I was expecting to find at all.”

Although Downs said he would not call himself a Milton expert, he hopes this research will unlock something he is very passionate about. “I have graduate school aspirations, so this could be a preview of what is to come,” said Downs, “but at the very least I will produce a productive piece of scholarly literature that will help inform and influence the rest of my career.”