Two Saint Michael’s College professors who believe astronauts might combat stress and reduce health risks in space using virtual reality meditation have spent the past year testing their theories on students and emergency responders at the College, funded by $50,000 in NASA grants and $8,000 of internal funding through the Vermont Biomedical Research Network. 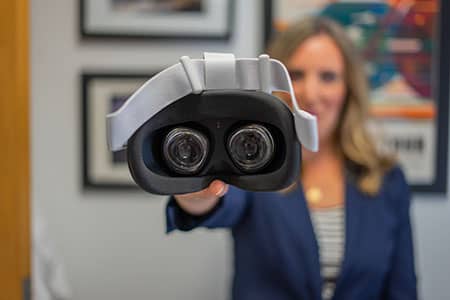 Professor Melissa VanderKaay Tomasulo with one of the headsets that student test subjects use to see if virtual reality experiences can reduce stress. (Photos by Max Rossignol ’22)

Now, more than a year into their study, the researchers — Melissa VanderKaay Tomasulo of the psychology/neuroscience faculty and Dagan Loisel of the biology faculty – recently learned they will receive an additional $50,000 in grants through the Vermont Space Grant Consortium — $25,000 apiece from two separate applications — to continue their promising and rewarding work. The NASA Space Grant offers research funds through similar consortiums in all states to encourage colleges and universities to partner with the agency.  Says Loisel, “The research project will provide new insight into the multitude of effects of stress on the body as well as the potential for Virtual Reality countermeasures to mitigate those effects.”

The first grant awarded in May of 2020 established their study in collaboration with NASA researchers, Brian Crucian, PhD, lead immunologist, and Satish Mehta, PhD, virologist, both at NASA’s Human Research Program at Johnson Space Center in Houston, Texas. Since then, the St. Mike’s researchers have been collecting data from Saint Michael’s student volunteers about stress and the use of virtual reality-delivered meditation and breathing exercises to counteract the stress response and, hopefully, negative consequences associated with chronic stress exposure.

Tomasulo said she and Loisel recruited approximately 20 participants from the general student body in the fall of 2020, and 20 participants from the Fire and Rescue program this past spring. In both the fall and spring groups, students agreed to don virtual reality headsets (purchased through the grants) several times a week as they collected bio-data on Fitbits (also purchased and provided to them for the study) about physical activity, sleep, and heart rate levels, and answered behavioral questionnaires. As it turned out, the fact that Saint Michael’s Fire & Rescue volunteers commonly face stressful scenarios that are different from the earlier test cohort made them an especially interesting group to study and provided expanded useful insights, Tomasulo said.  Moreover, she said, “who better to provide stress reduction support to than first responders during a pandemic?!”

Loisel in particular stressed the utility of the work in this study for also involving undergraduate research assistants, who thereby gained important hands-on biomedical research experience.

Participants also collected periodic saliva and urine samples to test cortisol levels and immune functioning indicative of the effects of stress with more verifiable scientific precision, and the researchers should receive test results later this summer after the samples they shipped to NASA are analyzed. “We considerably value our NASA collaborators – their partnership, insight, and the opportunity we have been awarded – and, look forward to what the data will show,” said Tomasulo, who also feels gratified by the research team’s ability to keep pushing through the challenges the pandemic presented during this project.

“I would have preferred not to have lived through a pandemic with the tremendous loss of life, anxiety, and stress it brought,” she said. “But at the same time, it was good for us to know that we were helping our first responder students during a difficult time. With everything that was thrown at us, just being able to conduct our grant research, despite the numerous challenges, was exciting and grounding.”

So far, she and Loisel have at least anecdotal evidence from many of the students indicating that they felt less stressed during the weeks they were practicing VR meditation. The professors say they would be excited if subsequent data from the biological test samples supported that idea, since it would mean a big step toward what medical professionals using virtual reality-delivered applications have started calling “digiceuticals” for stress reduction – not only in space, but more widely in clinical and medical settings.  Applications already include acute and chronic pain reduction and alleviation of PTSD symptoms.

In more technical terms, Tomasulo said, “our project aims to not only investigate the ability of a virtual reality delivered stress-relieving countermeasure to decrease stress hormones but also to see if it can prevent ensuing immune system dysfunction and viral shedding” – that is, since a stressed astronaut is more likely to pass along illness through viruses that might be “shed” due to stress in the close quarters of space, preventing that from happening is a high priority – hence the keen interest in their results. The work also has direct relevance for preventing immune dysfunction and improving health outcomes for people back on Earth.

Other interesting possibilities have emerged in the course of their work over the past year, Tomasulo said. For instance, to deliver a proper de-stressing VR meditative experience, the researchers have been using an app called TRIPP® on the Oculus Quest headset that their test participants use. TRIPP®, based in California, and the professors have for some months been communicating about the research study. “We’ve been very impressed that one of their foci is to partner with researchers to find further benefits to their technology,” said Tomasulo. “Both Dagan and I have used the app and I find it to be very effective at reducing my responses to stress, as well as helping me to re-center and focus, which was needed more than ever over this past pandemic year.”

“The main thing is that it is a ‘360-immersion meditation software that induces quietude of the mind and works to enable its user to enter a flow-state to reduce stress,” Tomasulo said. She and Loisel found TRIPP® after the original meditation app they were going to use for their participants’ headsets was not available for the updated Oculus Quest devices.

Another interesting development for the researchers was when Tomasulo and Loisel had a chance to virtually chat in real-time last fall with their collaborating NASA researcher Crucian and the American astronaut Dr. Serena Auñón-Chancellor, MD, who has been on previous missions to the International Space Station and is a physician. “Our main purpose was to share what we planned for our stress-reduction protocol and ask if she thought it would be effective and feasible in space — and she concurred, while also giving us important perspective and considerations,” Tomasulo said.

The study’s genesis for the St. Mike’s researchers felt a bit like an aligning of the stars, growing as it did directly out of their Saint Michael’s teaching. Says Tomasulo: “Dagan and I were preparing lectures for the new Introduction to Health course’s unit on the psychological and physical effects of stress on the body and we came across one of Dr. Crucian’s papers.”  She further shared that she has been “a huge space enthusiast” since she was a kid “with an 8-foot poster of the space shuttle Discovery on the ceiling above my bed and a collection of mission patches.” She said that for her and Loisel, “when teaching informs research and research informs teaching,  it is the perfect superposition of a liberal arts education.”

“We knew the Vermont Space Grant program provided research grants for academic institutions to partner with NASA researchers,” Tomasulo said, so when they saw the lead NASA scientist from the first paper they had found was mentioning stress reduction activities and breathing exercises and its possibilities in another paper, “we reached out to Dr. Crucian, explained who we were, and what we hoped to research — this was February of 2020, pre-pandemic — and he was very supportive of collaborating with us on this.”

It happened that Crucian and his NASA team were looking to develop and test a suite of countermeasures to prevent shedding of latent viruses and immune dysfunction for future Artemis and deep space missions, and one such countermeasure they suggested was more evidence for an effective stress reduction protocol suitable for astronauts. “It was just this perfect confluence of things,” Tomasulo said.

Another interesting twist came several weeks ago when they met with a Burlington-area company called OVR Technology – referring to Olfactory Virtual Reality. The OVR founders hosted the St. Mike’s researchers for a visit at the OVR location in Burlington’s new Coworking & Innovation Campus HULA Lakeside and they became excited to learn of the possibilities of using smells – aka olfaction — to enhance virtual meditation experiences. “When in space, especially on longer duration missions in isolated and extreme environments, astronauts often share that they miss the feel of a breeze, the sound of rain, and the smells of Earth,” Tomasulo said. “Olfaction is most linked to our emotion and memory areas of our brain. We are particularly interested in OVR Technology’s nature scentware and are exploring the use of this technology now, why not make our stress-relieving countermeasure multi-sensory.”

Part of their funding includes a travel grant, so the St. Mike’s researchers hope they can fly to Houston in the coming year to present their findings to NASA scientists at the Johnson Space Center, once more data comes in and they have the chance to reach firmer conclusions.

The Vermont Space Grant Consortium (VTSGC) is an organization consisting of academic institutions, private industry, and public entities. Funded by a grant from NASA’s National Space Grant College and Fellowship Program, key goals of the VTSGC are: to build aerospace-related research infrastructure within the state; to promote science, technology, engineering and mathematics.