Saint Michael’s College psychology professor Ari Kirshenbaum has been using a $224,000 National Science Foundation grant he received in September 2020 to develop a mobile app that measures the effects of cannabis on a user’s neurocognitive functions: things like reaction time, time perception and concentration, which are all affected by THC. 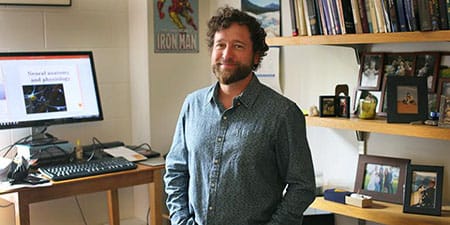 Professor Ari Kirshenbaum in his office at Saint Michael’s College

The free app called “Indicator,” which uses artificial intelligence for advanced data analytics, will be publicly available this month for home users of cannabis with iOS (Apple iPhone) devices (Android coming soon). The app allows users to measure and record how the cannabis products they use affect them in order to promote insight, awareness, and ultimately broader public safety efforts, the professor said.

As legalization efforts move forward across the country, better understanding and quantifying of cannabis effects will be crucial to promote safe and responsible use. For example, the recent federal Senate Drug Caucus Control Report, promoted by Senators Cornyn and Feinstein, demonstrates the bipartisan support and national need for more information on cannabis and its neurocognitive effects. Kirshenbaum said “we are simply answering their call for more research and data.”

“The app we have developed gives people immediate feedback about specific neurocognitive aptitudes like reaction time, time perception, and concentration, which are all affected by THC,” he said. The app does so in part by using what he terms “neuro games” or “brain games” that have proven successful in distinguishing THC effects from impairment by alcohol or other drugs or dementia, for instance.

Kirshenbaum is principal investigator for a project titled “Neurocognitive and behavioral detection of THC impairment,” funded early last fall for a year of research and development through an NSF Seed Fund called a Small Business Innovation Research (SBIR) grant. Kirshenbaum said he also has Burlington-area partners and some private investments behind his project.

While his initial motivation for the work was “as a concerned father of a teenager wanting to make the roads safer,” his interest expanded further when he got cancer in 2019 and “came to realize a lot of people get such a tremendous therapeutic benefit from cannabis. Many of those who use it are concerned about how certain products and doses might affect their day-to-day skills and abilities for better and for worse.”

Also, he notes, other concerns arise with largely untested levels of THC concentrations in cannabis products such as vapes and edibles, and how inexperienced users might not know how these will impact their skills and abilities. The app aims to solve this problem by helping to determine how dose-effects of THC influence cognitive perceptual and motors skills. Ultimately, he and his team hope to create a standard for cannabis products similar to ABV in alcoholic beverages.

The professor said the funding that he and his partners have received up to now is to develop the app through partnerships with software developers and conduct proof-of-concept and usability testing that has returned encouraging results.  “We are well on our way to meeting the objective of phase 1 of the SBIR program now, and we will apply for phase 2, which has a $1 million cap, soon,” he said. “Phase 2, if successful, would permit us to do research with students at Saint Michael’s and elsewhere to test the basic functionality and validity of the app by compiling large normative data sets in a controlled setting.”

Kirshenbaum said the patent-pending app, “will be downloadable and free since we want to get it in the hands of people using cannabis and see whether they find it useful as concerned, thoughtful consumers.”

The overarching interest and mission of Kirshenbaum and his partners is public health and safety, the researcher said. He hopes that at the very least, the app will help to educate cannabis users about how different products and doses affect them. The ultimate goal is to gain a better ability to “quantify high” and work with all interested parties to promote safe and informed cannabis use.

Howie LeBlanco is all about people, conversations, inclusion