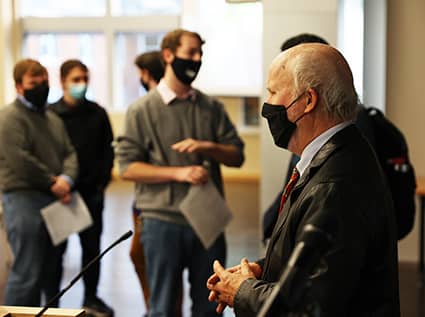 George Dameron talks with students after his lecture November 1. (photos by Alex Bertoni)

In his late-afternoon lecture about “Dante in a Global Context” on November 1 at Saint Michael’s College, Emeritus History Professor George Dameron reminded a packed Roy Room in the Dion Family Student Center of the value in studying humanities to get along well in life — both in practical ways and in poetic, spiritually renewing ways.

Introducing the speaker to nearly 100 masked and spaced-apart listeners, Dameron’s longtime colleague Christina Root of the English faculty described “George’s passionate advocacy for the Saint Michael’s Humanities Program over the course of his career”: designing courses, encouraging faculty across disciplines to teach in the program, guiding key hires of humanities scholars, and founding the Humanities Center in 2012. Root and Crystal L’Hote of philosophy now are co-directors of the Center. She said Dameron was the first speaker in a series they recently conceived to honor the work of emeritus faculty in the humanities as “a bridge over the abyss and into a brighter future.”

“His sharing of knowledge is always in the service of conversation and connection between individual groups” while being truly open to opposing ideas, Root said.

Dameron wove personal anecdotes and impressions into what was also a deeply scholarly and absorbing presentation that lasted a bit over an hour, illustrated by informative and beautiful PowerPoint slides from his many trips to Italy or words from his written works — followed by a short question and answer session.

Organizers were pleased by the large turnout at Monday’s Humanities series lecture in the Roy Room.

Offering a charming window into the life of the mind at its best at Saint Michael’s, Dameron started by recalling regular long-ago breakfasts in Winooski with his longtime late colleague Will Marquess of English, during which they would discuss Dante’s masterwork, The Commedia, from every sort of angle, to their mutual delight and edification as young scholars. “This year, as we mark the 700th anniversary of Dante’s death, it has often reminded me of those meetings…our current pandemic year of 2021 has brought together thousands of scholars, artists, students and teachers all over the world to discuss and evaluate the legacy of Dante’s ideas and poetry — much as Will and I were trying to do in the mid-1980s.”

These recently raised-anew questions inspired Dameron to argue in his talk that “The society in which [Dante] lived were truly very different from our own, but it bears many characteristics that still resonate with us today.” He argued that Dante properly is considered a “world poet,” and “an artist from whose ideas and poetry we can all benefit, regardless of background”.

Dante’s political work, the speaker said, “warns us about the dangers of factionalism and the frailties of republics; yet beyond that, and just as important, “the musical quality of Dante’s poetry transcends both time and space” providing opportunities “for edification and even for comfort.”

He proceeded to describe in some detail the fascinating particulars of Dante’s life in Florence and elsewhere in Italy in the late 1200s and early 1300s. Dameron wove in insights from his personal expertise on grain and its role in the Florentine world then; observations about politics and intrigue among city-states, about trade, workers, bankers and merchants, and the central role of the papacy in those times. He described how French courtly, chivalric literature heavily influenced Dante’s poetry. He also likened some of the civic engagement and activism of Dante’s writing to modern work by the Irish poet Greg Delanty of the Saint Michael’s English faculty. Fortuitously, Delanty was in the audience and came up front at the end of Dameron’s talk to drive home some interesting related points from the perspective of a modern-day activist poet.

Dameron observed that “Dante’s principal targets in the pit of hell were the politically treacherous – those who actively undermined peace and civic justice.” The speaker’s impressively wide-ranging lecture covered everything from law to foreign relations and science in the context of Dante’s times.

Relating some of that history to modern times, he noted that “significant changes in weather are discernible from the 1260s” and that weather deteriorated rapidly in Europe and Asia in the period. “It was wetter, colder and rainier in Europe, dryer, more drought-stricken in Asia” causing grain shortages, Dameron said, further noting that many collateral disasters stemmed from the weather changes of those times.

Tying it all together to close, he said, “As a moralist, he reminds us how harmful and destructive the forces of cupidity, greed, narcissism and avarice can be in any society. His vision of a ‘moral community’ called for a commitment to the common good that rejected the narcissistic aspirations of the few. These observations can speak to us 700 years after his death just as cogently as they did for Dante’s contemporaries in the fourteenth.

“Yet perhaps most importantly,” he continued, “Dante’s art, more specifically his poetry, can also provide us with a source of refuge, a source of hope, and a source of solace in troubled times …. Not only with the pleasure that comes from its musicality and rich images, but it also offers us a vision of hope.”

Of the end of The Commedia when the narrator experiences a flash of light , a vision of the divine emanating Love at the end of his journey, Dameron said, “Perhaps Dante is here telling us that no matter what this broken world may throw at us, or what obstacles our flawed nature places in our path, art – poetry – has the power to give us hope; art has the power to uplift and transform us to be better, wiser, more committed to loving others.”