On Monday, October 4 of this week, Saint Michael’s Associate Professor of French Peter Vantine participated in a ceremony at City Hall in Burlington during which Lise Veronneau was officially named the new Honorary Consul of France in Vermont. 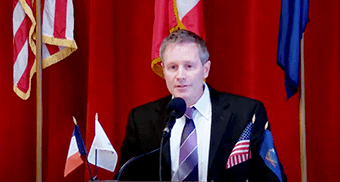 Professor Vantine was invited to make remarks at the ceremony as a representative of educational institutions in Vermont, both on behalf of President Sterritt and on his own behalf as a teacher of French and active member of the Burlington-Honfleur Sister City Committee that is presided by Lise Veronneau.

Ms. Veronneau has worked closely for many years with outgoing Honorary Consul Ernie Pomerleau ’69, who served in that role for over a decade and has been a strong advocate for celebrating Francophone heritage in Vermont and fostering ongoing cultural, educational, and economic ties between Vermont, France, and Quebec; he will continue to support Ms. Veronneau as she now takes on the role.

Professor Vantine’s remarks highlighted this continuity and noted that Ms. Veronneau, like her predecessor, will fulfill her duties with “aplomb, generosity, and zeal.” The Pomerleau Alumni Center at Saint Michael’s is named to honor Ernie’s late parents, Antonio and Rita.

Monday’s event also served as a celebration of the relationship between France and the State of Vermont. Other dignitaries who spoke at the event included the Consul General of France in Boston, Arnaud Mentré; the Secretary of the Vermont Agency of Commerce and Community Development Lindsay Kurrle ’93; Mayor of Burlington Miro Weinberger; and, via video message, the Mayor of Honfleur, France, Michel Lamarre. The Quebec Delegate to New England, Marie-Claude Francoeur, was also in attendance.

Mayor Lamarre was part of the delegation from Honfleur that traveled to Burlington in October 2017 and visited Saint Michael’s College to tour the campus, see some of the Edmundites’ archival material pertaining to their origins in France, and meet with students and faculty in the College’s French program. Former Saint Michael’s President Marc vander Heyden and his wife, Dana, were instrumental in working with others to create the Burlington-Honfleur Sister City relationship beginning in 2009 and have remained very actively involved in it, along with Father Marcel Rainville, SSE ’67 and Professor Vantine.

In June 2022, President Sterritt’s Historical Tour of the Edmundite Foundation in France, being organized and led by Fr. Rainville, will take alumni to Normandy, France and include a stop in the beautiful and historically significant port city of Honfleur.