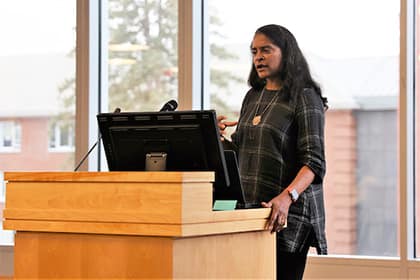 The power of language and other artistic expressions in telling Black America’s story of pain, joy and sense of self, all amid complex tensions with white America through our history, were themes for guest speaker Emily Bernard Monday night in the Dion Family Center Roy Room.

Bernard’s Monday keynote talk, titled “Freedom and the Black Artist: An Ongoing Dilemma,” was centered on the theme of this year’s convocation as well as the question, “What does it mean to be an artist and be free?”

This week is the 30th Martin Luther King Dr. Convocation that the College has hosted. The campus MLK Jr. Society plans and hosts the annual week of Convocation activities. These students in the Society comprise the racial equity activism and interracial social justice group on campus, supported by the Center for Multicultural Affairs and Services (CMAS). Monday’s event opened the week with several campus celebrities in attendance such as President Lorraine Sterritt, Public Safety Director Stanley Valles and Father Brian Cummings, SSE ’86 along with many faculty members.

To begin, MLK Jr. Society member and event emcee Jeson Li ’23 acknowledged observance of Ramadan among Muslim members of the community and gave recognition of the Indigenous land on which the event, as well as other College activities, took place. The convocation program itself featured a prayer inspired by Martin Luther King Jr.’s words led by Fr. Brian, Corinthians 12:9 sung by MLK Jr. Society member Daneroy Lawrence ’22, followed by keynote speaker Bernard, who also took questions and led discussion after her presentation that included PowerPoint slides.

Bernard is a graduate of Yale University where she earned her bachelor’s degree and PhD in American Studies. She is a critically acclaimed author as well as an English professor at the University of Vermont. Her most recent work, Black is the Body: Stories from My Grandmother’s Time, My Mother’s Time, and Mine, was deemed a Best Book of the Year by NPR and won the 2020 Los Angeles Times’ Christopher Isherwood Prize for Autobiographical Prose.

Bernard continued further in explaining that Black artists have been facing this issue or some derivative of it ever since. Bernard moved on to speak about Frederick Douglass and how slavery played a huge role in suppressing Black voices and Black art. Douglass developed the importance of the slave narrative so much so that these narratives sometimes were written by free Black people in order to influence politics, she said. “White readers have always hungered for Black stories,” Bernard said, “hand-in-hand with white resistance to that representation.”

The idea of the “Black self,” and how the idea of the self comes out of Black culture, was the center of the second half of Bernard’s talk. “Black people have been [creating] culture since they came to this country,” Bernard said. This sense of Black self comes from the emergence of the “Black intellectual” through art, music, literature, and poetry during this time, from the Harlem Renaissance of the earlier 20th century through cultural reactions, shifts and controversies in the 1960, on into modern times with strong influences of Hip Hop culture, she said.

Bernard discussed how conflicts from within different movements occurred due to opposing perceptions of the “self.” Langston Hughes, for example, did not want to be known as a “Black artist,” but instead just an “artist.” Other writers perceived this notion to be anti-Black, or Hughes running away from Blackness, but Hughes did not see it that way.

Daneroy Lawrence ’23 sings a powerful and beautifully performed original song near the start of Monday’s kickoff for MLK Jr. Convocation Week in the Roy Room.

As generations continued to use language and culture to revamp the idea of the “Black self,” younger generations rejected the artistic expression of movements such as the Harlem Renaissance, because it catered too much in their view to white palatability. White reaction to and reception of Black art is the generational link between Black artists such as WEB Dubois and Langston Hughes though their perspectives on the matter were not the same, she said.

Bernard ended her talk by delving into how the use of language is essential to identity, and that language is always undergoing revision. “Blackness is a language, and a language is a territory,” she said.

During the Q&A session following Bernard’s presentation, a question arose about Black art, especially music, today, and how white people consume it through what could be viewed as entitlement and/or appreciation. Bernard acknowledged this complicated issue of how “hip-hop is now pop culture,” and said there is a “delicate line between sharing/appreciating and appropriating.”

Bernard also expressed her wariness toward the current publishing industry and its seeming fascination with stories about Black pain. She stressed how important it is to have casual representation that does not profit off such pain, but instead shares Blackness in positive ways that express Black joy too.

Representation is so powerful, Bernard said, offering in closing the example how big it was in her own family’s life culturally when Barack Obama was president so that her daughters might see “girls with hair like theirs in the White House.”