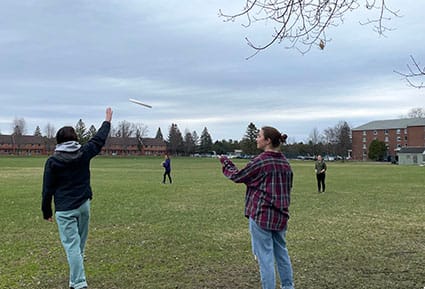 Ultimate Frisbee Club practices on campus recently. The large photo behind the headline shows this year’s tournament squad congratulating an opponent after a game at Holy Cross this spring.

The Saint Michael’s College Ultimate Frisbee Club is celebrating recent success at a tournament in Worcester, MA, at the College of the Holy Cross. The team won all four games in the tournament, leaving the final score at 4-0.

Finsterer said the tournament team, a smaller group chosen based on commitment and skill level, made their way down to Worcester on the afternoon of Saturday, April 9 and spent that night at a fellow captain’s childhood home, where that player’s parents graciously hosted them. Finsterer said he really enjoyed the team bonding that occurred that night. “We played Mario Kart, Pictionary, and we had a big pasta dinner. The food was so great and we were all just able to really hang out together,” he said.

Bonding is something that co-captain Emily Grant ‘22, an environmental studies and anthropology double major from Albany, NY, believes is crucial in setting foundational goals and expectations for the team. “We want to emphasize the parallel initiatives that we have which are competitive play but also community events which provide a safe space for different members of the community to just come and have a really relaxed club,” she said.

The team’s faculty adviser, Computer Science Professor Greta Pangborn, offered some whimsical history of the club that gets at its “relaxed” roots:

“I don’t know how long the club has existed, but they had gotten away without an adviser until about 2010,”  she said. [Former longtime student activities director Grace Kelly ’81] “told them they needed to get an adviser and that they should create their own adviser form.  An English major whose name escapes me was inspired (I expect by [the English faculty’s] Kerri Shea) to create a proclamation in old English style promising a ridiculous slate of things like bedtime stories and pancakes. I have no idea if this lives on in one of the filing cabinets of the current student activities director, Kerri Leach, but I unfortunately never kept a copy.  One co-captain this year was one of my students, who suspected (correctly) that I would think they were funny and be willing to sign. They didn’t care about my lack of ultimate Frisbee knowledge.”

Finsterer and Grant said strengthening those team relationships makes players more comfortable and ambitious on the field, ultimately strengthening their skill level. This is something Grant has witnessed over her four years on the team and three years as a captain. She said, “I have really enjoyed watching individuals grow into themselves and become more confident on the field.”

This confidence shone through each player who participated in the recent tournament. Co-captain of the ultimate frisbee team, Nick Johnson, a business major with an environmental science minor from Beverly, MA, is proud of the success the players had that weekend. “Almost half the team that played at the tournament is in their first year playing. They did great, they had a lot of fun, and I think a lot of them surprised themselves,” he said.

Johnson appreciates when individuals try out the sport spontaneously and end up joining. “I think it’s really cool how people can pick it up even if they’ve never played and just fall in love with it.” Johnson said. Once individuals join the team, they are never required to show up to a practice, said Johnson, so the commitment ultimately falls on the individual participating. “The core people that like to show up every day really just do it for the team and themselves, and you can tell they love being here,” he said.

Grant has enjoyed watching the love for the team, as well as the commitment, grow stronger with new members, every year since her first year. “When I first joined, we probably had about 15 to 17 consistent members and now we probably have a rotating cast of about thirty-five to forty,” she said. While that number has grown tremendously, new players are always welcome.

In the future, they are hoping to participate in more tournaments, as well as hosting some of their own. They are currently hoping to attend “Lobster Fest,” in the fall, which is a larger ultimate frisbee tournament located in Maine.

As Finsterer said, “I love that, regardless of your skill level, there’s something that everyone can get out of the ultimate frisbee team.”

The full Ultimate Frisbee Club on campus earlier this year.